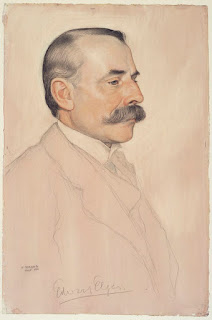 Syllables govern the world.
John Selden
Edward Elgar quotes a brief melodic fragment from the beginning of a theme featured in Felix Mendelssohn’s concert overture Calm Sea and Prosperous Voyage in Variation XIII of the Enigma Variations. In the original full score, three Mendelssohn fragments are enclosed by quotation marks and played by the B-flat Clarinet. The first two are in A-flat major, and a third is in E-flat major. There is another Mendelssohn fragment in F minor performed by the trumpet and trombones which is not overtly identified by quotation marks in the full score because it departs from the original major mode. In all, there are four Mendelssohn fragments with two in A-flat major, one in F minor, and the last in E-flat major. 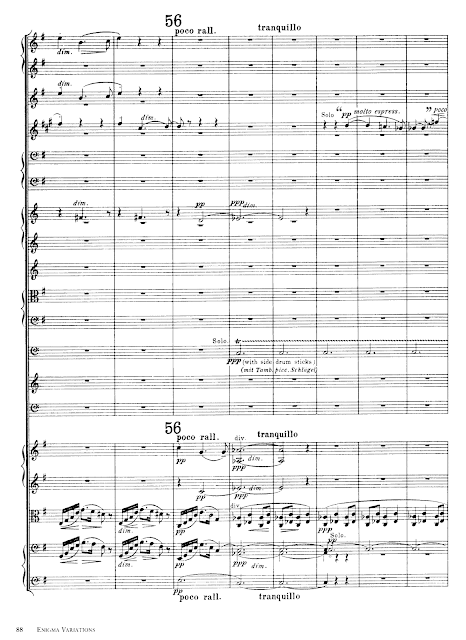 The significance of the key letters from these Mendelssohn fragments—A, E, and F—is that they form an anagram of a well known musical cryptogram derived from the initials of the violinist Joseph Joachim’s romantic motto “Frei aber einsam” (Free but lonely). The presence of such a conspicuous musical cipher in the Mendelssohn fragments is extraordinary for at least two reasons. The first is that well-respected scholars such as Julian Rushton failed to detect something so obviously concealed in plain sight. The second is that it forcefully intimates the existence of more cryptograms in Variation XIII, and by extension, the rest of the Enigma Variations. 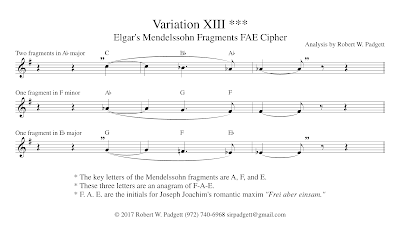 The Frei Acrostic Anagram Cipher
It is significant that Elgar encoded Joachim’s maxim in more than one way in the Enigma Variations. With the key letters of the Mendelssohn fragments, he simply enciphered its initials. He escalates the sophistication of his cryptographic prowess by encoding the entire phrase within four subtitles found in the Enigma Variations. While the majority of the Enigma Variations are given titles with straightforward initials or nicknames, there are four movements with extra subtitles that invite being treated as a distinct subgroup. The first is the original Theme which Elgar evasively calls Enigma. This is followed later by Variation X entitled Dorabella with the added subtitle Intermezzo. Variation XIII has three asterisks ostensibly representing a set of missing initials with the subtitle Romanza. The last is Variation XIV with Elgar’s German initials (E. D. U.) and the subtitle Finale.
The first major breakthrough in analyzing this discrete group of four subtitles for prospective ciphers was the realization that their first letters are an acrostic anagram of the German word frei. That is the initial word in Joachim’s German motto. This discovery triggered the search for the remaining two words. With the subtitles rearranged so that their first letters spell frei, the remaining two words were detected in Italian (ma) and phonetically in German (eanzam). This outcome may appear incredible, yet it is assuredly not due to superficial confirmation bias because there are far too many reciprocal intersecting data points. The Frei Acrostic Anagram Cipher is authentic with confirmation of its efficacy supplied by the Mendelssohn Fragments FAE Cipher.
The appearance of such a phonetic spelling in the decryption of the Frei Acrostic Anagram Cipher is not evidence for its contrivance, but rather further proof of Elgar’s complicity. As Eric Sams observed, “Elgar was notoriously obsessed with phonetic spellings.” His personal correspondence bristles with phonetic spellings, so a phonetic rendering in the decryption bears his cryptographic fingerprints. With four Mendelssohn fragments, Elgar encodes the three initials for Joachim’s romantic motto. In a similar vein, with four subtitles he embeds all three words in the proper order. The number four crops up repeatedly in this analysis of Elgar’s ciphers. There are four string parts in his Enigma Locks Ciphers. There are four Mendelssohn fragments consisting of four notes each. There are four subtitles in his Acrostic Anagram Cipher. Elgar’s selection of those four subtitles must have been carried out with exquisite care to enable the construction of such a sophisticated cryptogram. 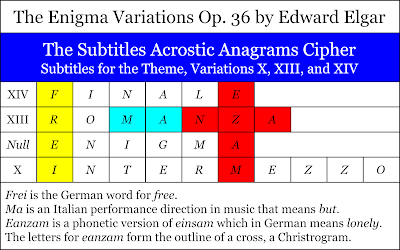 It is nothing short of revelatory that the phonetic spelling for einsam forms the outline of a cross over the subtitle Romanza. This betrays Elgar’s penchant for wordplay because according to the gospel accounts, the Romans crucified Jesus on a cross. The Enigma Variations harbor multiple overt and covert references to the cross. This widely recognized symbol of Elgar’s Roman Catholic faith serves as a clue that confirms the identity of the secret friend memorialized in Variation XIII. Just as the Mendelssohn fragments encode one set of initials, the Roman numerals for that movement encipher yet another set that divulges the secret friend’s actual identity. The application of a number-to-letter cipher to the Roman numerals XIII unveil the secret friend’s initials. X represents the number ten, and the tenth letter of the alphabet is J. III stands for three, and the third letter is C. These letters are the initials for Jesus Christ, the Lord and Savior of Elgar’s Roman Catholic faith.
In addition to placing a coded emphasis on the number four, Elgar also draws unusual attention to the number six throughout the Enigma Variations. The opus number (36) is the product of six times six. There is an oddly placed double bar at the end of Enigma Theme’s sixth measure. There are precisely six titles given to various movements that are each six letters long. The first is Enigma, while two others appear in succession for Variations VI (Ysobel) and VII (Troyte).
Less obvious but equally relevant is the presence of a six-by-six music box cipher embedded within the first six measures of the Enigma Theme. When decoded, it unveils Elgar’s “dark saying” first described in the original 1899 program note.  The full title of the covert Theme has six words—Ein feste Burg ist Unser Gott. There are 24 letters in that title, the sum of four sixes. The lyrics of Luther's most famous hymn originate from Psalm 46,  a chapter ending in six. The names Martin and Luther both have six letters. Elgar's use of the German augmented sixth chord in the Enigma Theme further alludes to the missing melody's six-word title in German. Even Elgar's dedication hints at this number for it is comprised of six words: “Dedicated to My Friends Pictured Within.” Elgar’s subtle but noticeable emphasis on the numbers 4 and 6 throughout the Enigma Variations points to the chapter number of the Psalm that has the covert Theme’s title.
Elgar added three asterisks next to the Roman numerals for Variation XIII ostensibly to represent those of a secret friend. A closer inspection of the particular asterisk printed on the original full score reveals it is a hexagram—the Star of David. This is a very symbolic gesture because one of the many titles for Jesus is the Son of David. 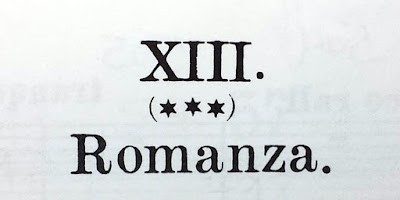 For those who are inclined to attribute these hexagrammatic asterisks on the first published score to someone other than Elgar such as an editor or publisher, one need look no further than the Master Score for the final answer. It shows that Elgar added three hexagrams on the Master Score next to the Roman numerals XIII. 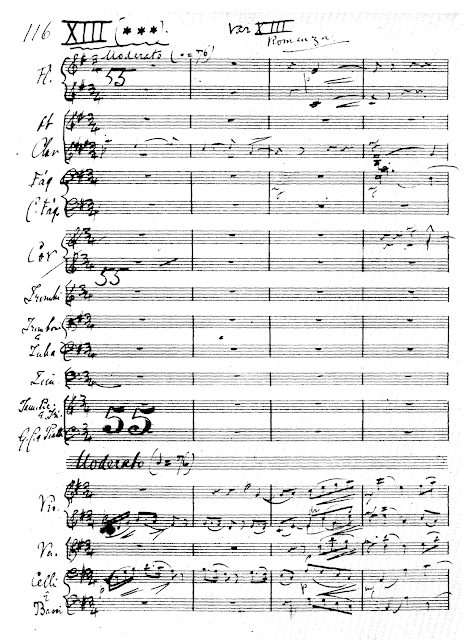 Elgar’s use of acrostic anagrams is not unique to the Frei Acrostic Anagram Cipher in the Enigma Variations. In the Enigma Theme’s first measure, he uses the same technique with the performance directions to encode his initials and the word psalm. That decryption is hugely revealing because the title of the covert Theme originates from Psalm 46. The three asterisks that serve as the cryptic title for Variation XIII hint at the hidden Theme’s title having three initials. Elgar cleverly provides those missing initials in the form of another acrostic anagram using the first letters of the titles from the contiguous Variations XII and XIV. In a classic display of misdirection, the secret friend’s initials are actually enciphered by the Roman numerals rather than the asterisks.
There are four Mendelssohn fragments in three contrasting keys which together encode the initials of Joachim’s romantic three-word motto in German. This discovery provides some revealing parallels with the covert Theme’s title because it also consists of three words in German. There are five syllables in Joachim’s romantic motto. As there are four Mendelssohn fragments which encode the initials for that Joachim’s aphorism, this invites a number-to-syllable cipher approach by counting forwards from the first to the fourth syllable. This deciphering method lands squarely on the letters ein, the first word in the covert Theme’s German title Ein feste Burg. When the same procedure is applied in reverse with the last syllable counted first, this arrives at the letter a, the first word in the English translation A Mighty Fortress.

The twin procedures of counting forward and backward through a dataset were applied effectively with the Enigma Locks Cipher. These transposition methods produced meaningful plaintext results that indirectly revealed the initials for the covert Theme via the Enigma Keys Cipher, and directly identified the initials for the secret friend. With the FAE Syllables Cipher, this same approach unveiled the first word in both the German and literal English translation of the covert Theme’s title. Again, the mutually consistent results defy a plausible chance explanation.
The conventional wisdom has stubbornly maintained that the Mendelssohn fragments are extraneous to the Enigma Variations. That opinion seems justified because these melodic extracts originate from an entirely different work. This is one instance in which the conventional wisdom proved to be monumentally wrong. Far from being unrelated, these fragments conceal a rich cache of cryptograms that confirm the identities of the covert melodic Theme and the secret friend memorialized in Variation XIII. This really should come as no surprise because Elgar was an expert cryptographer. To learn more about the secrets of Elgar’s Enigma Variations, read my free eBook Elgar’s Enigmas Exposed.
Soli Yah Gloria