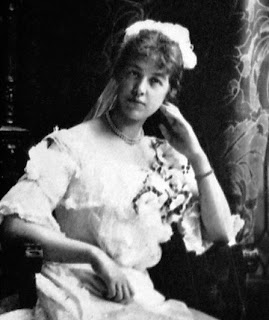 I am an unashamed champion of tonality…Tonality means line; line means melody; melody means song; and song, especially folk song, is the essence of music, because it is the natural, spontaneous and primordial expression of human emotion.
Miklós Rózsa

Edward Elgar dedicated Variation VI to his viola student, Isabel Fitton (1868-1936). Elgar knew the Fitton family from his youth. At the founding of the Worcestershire Philharmonic Society in 1897, Elgar was appointed conductor and Isabel served as one of its two secretaries. The other secretary was Winifred Norbury, the friend pictured within Variation VIII.
Elgar chose to acknowledge his friend using the Old Testament version of her name. In Hebrew Ysobel is derived from Elisheba, meaning “Oath of God” or "God is her oath". Elizabeth is the more common spelling of this ancient Hebrew name. Elizabeth was the wife of Zachariah, the mother of John the Baptist and cousin to Mary, the mother of Jesus. Just as John the Baptist preceded Jesus, so does Variation VI precede Variation XIII. As I show in this post, the secret friend portrayed in Variation XIII is none other than Jesus, Elgar's Lord and Savior according to his fervent Roman Catholic faith.
Ein feste Burg plays through and over Variation VI as shown in Figure 15.1. The missing Principal Theme plays in the upper staff while the variation appears in the lower two staves as a piano reduction. The notes of the Principal theme are based on Bach’s rendering of Ein feste Burg from the final chorale of Cantata BWV80.  An audio file of this melodic mapping supports the efficacy of this contrapuntal solution. 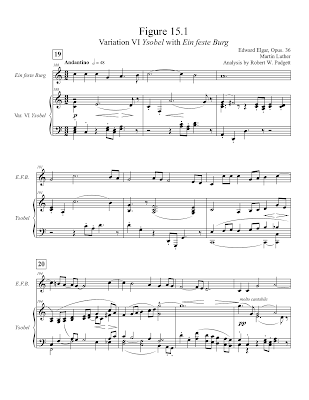 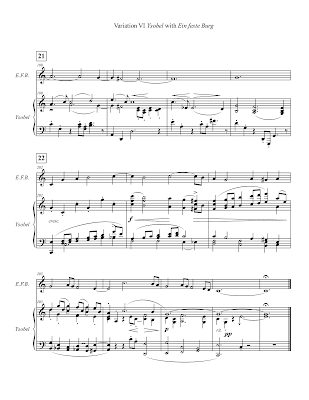 Figure 15.2 illustrates precisely how Ein feste Burg was carefully mapped over Variation VI based on melodic interval mirroring and the principles of counterpoint. Melodic interval mirroring occurs when note intervals from Ein feste Burg are reflected in the variation over comparable or identical distances between notes. These notes do not necessarily appear in the melody line of the variation. The contrapuntal devices of similar and contrary motion were also considered in this analysis. Similar motion is when both voices move in the same direction, but not necessarily by the same degree. Contrary motion takes place when Ein feste Burg moves in the opposite direction than the variation, again not necessarily by the same interval. Similar motion is indicated by SM, and contrary motion by CM. For the purposes of this analysis, similar motion includes any instances of parallel motion, and contrary motion any instances of oblique motion. In some cases, the upper voice of the variation moves parallel with Ein feste Burg while the bass line moves in a contrary manner. An effective counterpoint typically employs a fairly balanced mix of contrary and similar motion, something clearly evident with this mapping. 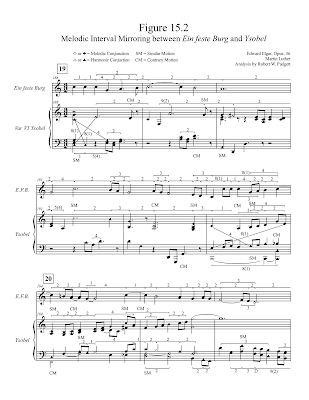 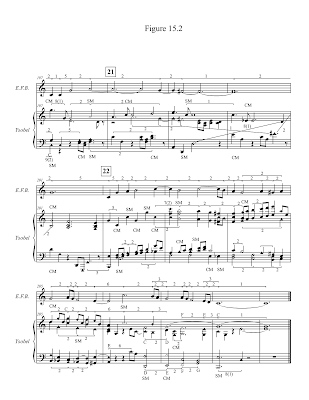 Table 15.2 breaks down melodic conjunctions between Ein feste Burg and Variation V by note type. There are 7 shared melody notes with frequencies range from 1 to 11. 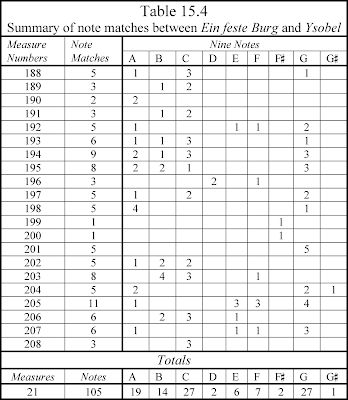 Conclusion
The preponderance of the evidence presented in the above Figures and Tables demonstrates Ysobel is a clear and convincing counterpoint to Ein feste Burg. To learn more about the secrets behind the Enigma Variations, read my free eBook Elgar's Enigmas Exposed.

Posted by Robert Padgett at 8:39 PM

One could take just about any tune in straightforward major tonality and "map" it onto this charming variation. What you have created here is the musical equivalent of the Procrustean Bed.

There is no justification for your very un-Victorian rhythmic distortions of Luther's melody -- none whatsoever.

And, by the way, "Parallel motion" is not so much a contrapuntal "principle," as you put it, as something that Elgar would have striven to avoid. To invoke it as a justification for how you have chosen to distort and force Luther's tune onto Elgar's music suggests that your own grasp of counterpoint is faulty.

Notice that Anonymous asserts just about any tune could be mapped over this variation without furnishing any evidence in support of such a grandiose claim. Much the same could be said about the rest of Anonymous' comments – vacuous verbiage devoid of any concrete evidence. As for the claim Luther’s tune is forced and distorted, the same could be said about its various renderings by Bach, Mendelssohn, Meyerbeer, Raff and Wagner. Understandably I count myself in good company.