The concluding movement of the Enigma Variations has the initials E.D.U. and the fitting subtitle Finale. The initials come from the first three letters in the German spelling of Elgar’s first name, Eduard. His wife gave him the affectionate nickname “Edoo” based on this German rendering. The initials E.D.U. suggest the Germanic origin of the covert principal Theme (Ein feste Burg). Contained within theses initials for Elgar’s musical self portrait is a reference to an acronym found extensively in the private correspondence of General Charles Gordon. The initials D.U. form the Latin equivalent D.V., an apotropaic meaning Deo Volente – God willing. [1] Elgar used the initials D.V. in his own personal correspondence. [2]
It is remarkable Elgar planned to compose a symphony in honor of General Gordon shortly before beginning work on the Enigma Variations. Knowing Gordon’s disdain for earthly honors and recognition, Elgar likely realized the best way – the right way – to honor Gordon would be to pay musical homage to Gordon’s God and Savior. To be consistent with Gordon’s fervent belief in and practice of hidden charity (the kind Jesus described as when the right hand knows not what the left is doing [3]), Elgar honors within the Enigma Variations the hidden God (le Dieu caché) with a hidden theme, and a hidden tribute to a hidden Friend to all, Jesus of Nazareth. In the final analysis, the Enigma Variations are a Christogram wrapped in a cryptogram concealed in an enigma.
Figure 23.1 shows how the covert Principal Theme plays 'through and over' Variation XIV. An audio file of this melodic mapping supports the efficacy of this contrapuntal solution. 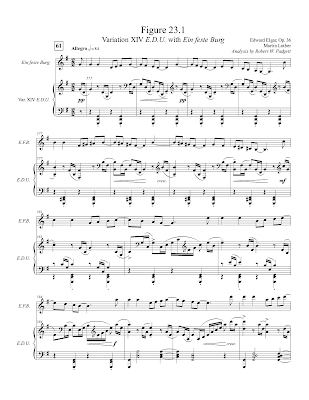 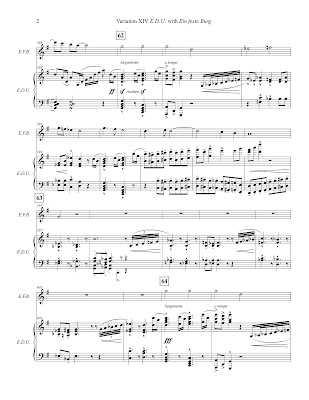 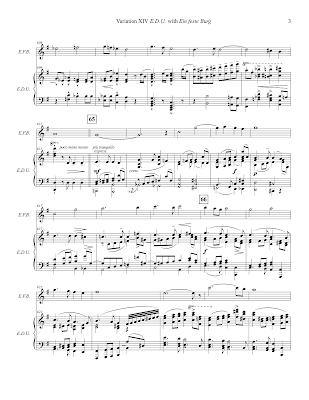 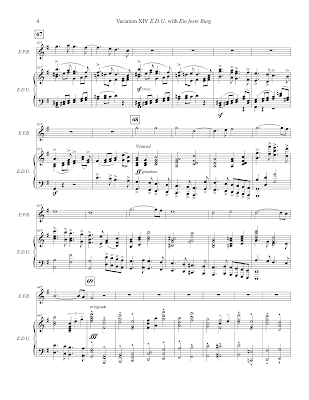 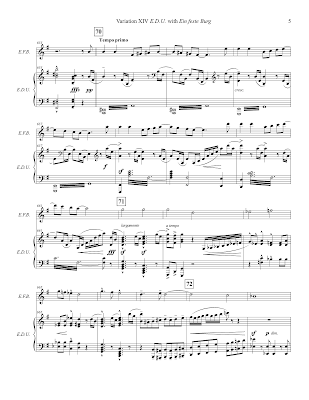 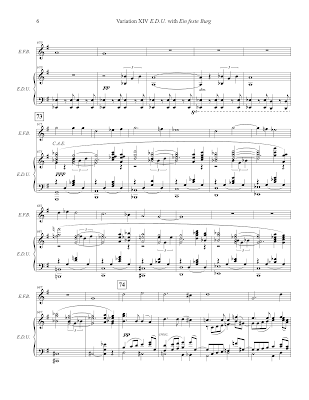 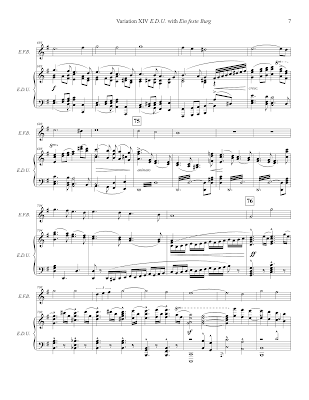 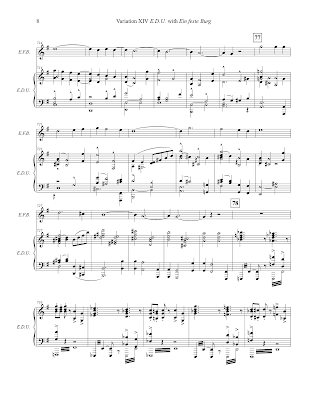 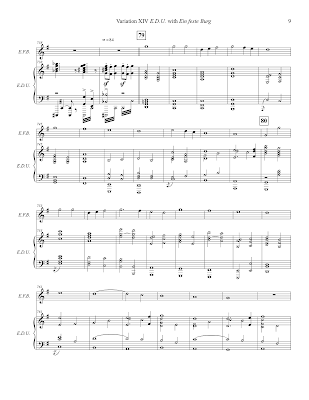 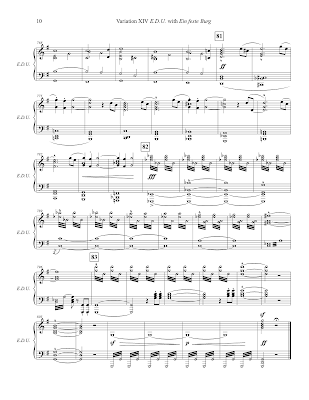 Melodic Interval Mirroring
Ein feste Burg was carefully mapped over Variation V based on melodic interval mirroring and the principles of counterpoint. Melodic interval mirroring occurs when note intervals from Ein feste Burg are reflected in the variation over comparable or identical distances between notes. These notes do not necessarily appear in the melody line of the variation. The contrapuntal devices of similar and contrary motion were also considered in this analysis. Similar motion is when both voices move in the same direction, but not necessarily by the same degree. Contrary motion takes place when Ein feste Burg moves in the opposite direction than the variation, again not necessarily by the same interval. In some cases, the upper voice of the variation moves parallel with Ein feste Burg while the base line moves in a contrary manner. An effective counterpoint typically employs a fairly balanced mix of contrary and similar motion, something clearly evident with this melodic mapping. The rhythmic contours of Ein feste Burg are essentially dictated by the score of Variation XIV, so any attempt to describe the melodic solution in terms of free rhythm would be misguided.  As with any successful counterpoint, the degree of incidence between two contrapuntal lines should remain sufficiently low to assure the independence of each voice. Elgar wrote that “the connection between the Variations and the Theme is often of the slightest texture…” [4] This technique is crucial when the composer is deliberately concealing a famous source melody.
Inactive measures are defined as those in the variation over which Ein feste Burg does not play. According to this definition, 77 out of a total of 236 measures in Variation XIV were found to be inactive. In other words, 33% of the movement does not present a clear counterpoint to Ein feste Burg. The total 236 does not include the pickup measure preceding the first full measure of the movement. There are eight inactive measure groupings as outlined below: 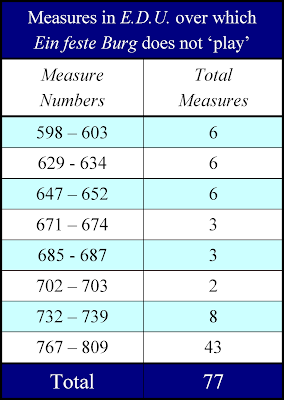 Following the premiere in June 1899, Elgar added 97 measures to the Finale to produce a more artistically satisfying ending.  My melodic analysis reveals 43 of those 97 measures are inactive, meaning 44% of those measures lack a discernable counterpoint with Ein feste Burg. Elgar did not find it necessary to continue with the counterpoint in the appended ending, a treatment found in II, III, VIII, IX, X, XI, XII, and XIII. This makes perfect sense from a cryptographic standpoint because concluding the counterpoint before a movement ends makes it far more difficult to work backward and interpolate the notes of the hidden theme. The same holds true for not consistently starting the counterpoint at the beginning of a movement, a phenomenon present in I, II, III, VII, and XII. With no predictable start and end points, detecting a counterpoint becomes far more daunting and uncertain. With the Enigma Theme Elgar does not present a discernible counterpoint to the opening phrase of Ein feste Burg until the bridge after the ending. Such an unconventional approach hardened the cipher because it deprives investigators of an obvious starting point from which to assess a counterpoint. The beginning counterpoint is not presented until the extended ending phrase marked by the ties between measures 17 and 18. Rather counterintuitively Elgar places his counterpoint to the Principal Theme's opening phrase at the end, and conversely the ending counterpoint at the beginning.
Table 23.1 identifies 204 melodic note conjunctions between Ein feste Burg and Variation XIV present in 85 or 53% of all active measures (160). There are 12 not types with frequencies ranging from 1 (B-flat) to 45 (G).

Table 23.3 summarizes 666 note matches between Ein feste Burg and the piano reduction of Variation XIV. The total number of matching notes is remarkable since Elgar draws special attention to the number six throughout the Variations. There are 12 note types with frequencies ranging from 3 (B flat) to 209 (G). The number 12 is a multiple of 6.

Conclusion
The preponderance of the evidence presented in the above Figures and Tables demonstrates  Variation XIV is a clear and convincing counterpoint to Ein feste Burg. To learn more about the secrets behind the Enigma Variations, read my free eBook Elgar's Enigmas Exposed.

[1] Strachey, Lytton. Eminent Victorians: Cardinal Manning, Dr Arnold, Florence Nightingale, General Gordon. New York: Modern Library, 1918, p. 297.
[2] Elgar, E. (1965). Letters to Nimrod: Edward Elgar to August Jaeger, 1897-1908. London: Dobson, 1965, p. 33.
[3] Matthew 6:1-3 says, “Be careful not to practice your righteousness in front of others to be seen by them. If you do, you will have no reward from your Father in heaven. So when you give to the needy, do not announce it with trumpets, as the hypocrites do in the synagogues and on the streets, to be honored by others. Truly I tell you, they have received their reward in full. But when you give to the needy, do not let your left hand know what your right hand is doing, so that your giving may be in secret. Then your Father, who sees what is done in secret, will reward you.”
[4] Rushton, Julian. Elgar: Enigma Variations (Cambridge Music Handbooks). New York: Cambridge University Press, 1999, p. 65.
Posted by Robert Padgett at 4:16 PM