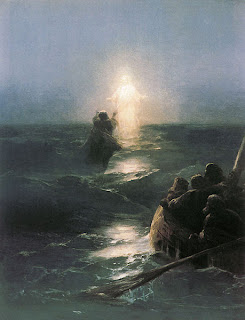 His eyes are like blazing fire, and on his head are many crowns. He has a name written on him that no one knows but he himself.
Revelations 19:12

Elgar secretly dedicated Variation XIII to the Lord and Savior of his Roman Catholic faith, Jesus of Nazareth. Figure 22.1 shows how Ein feste Burg plays '"through and over" Variation XIII. An audio file of this melodic mapping supports the efficacy of this contrapuntal solution.Figure 22.1 draws from the final chorale of Bach's cantata Ein feste Burg BWV80, Das Wort sie sollen lassen stahn. A performance of this chorale is available here. 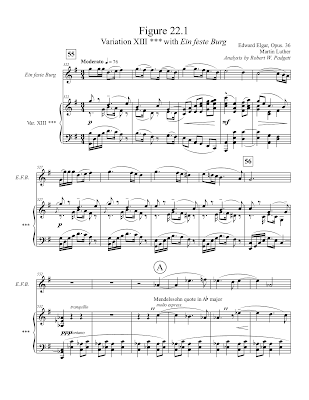 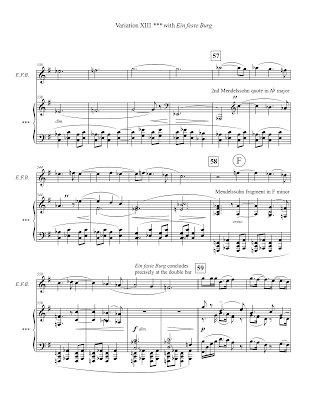 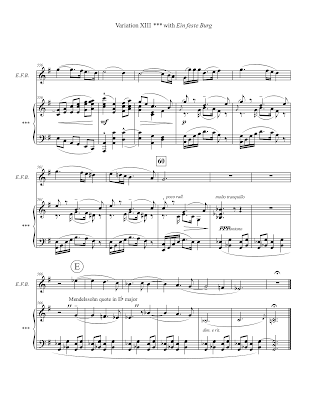 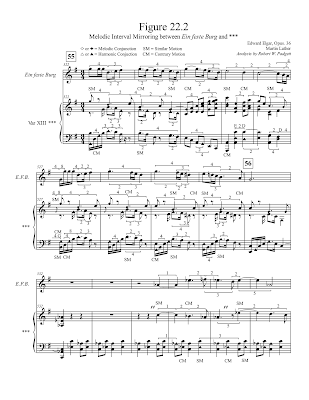 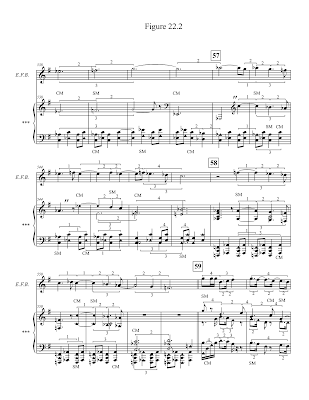 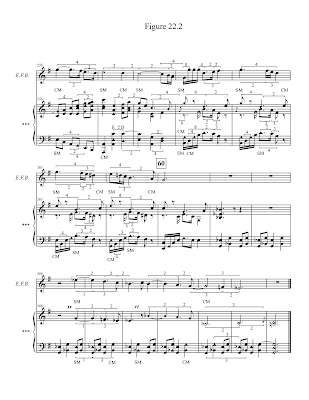 In Figure 22.2 a melodic conjunction is represented by a diamond-shaped note head, and a harmonic conjunction by a triangle-shaped note head. A melodic conjunction is defined as any matching melody note between Ein feste Burg and the movement's melody line. A harmonic conjunction is defined as match between a melody note from the covert Principal Theme and any non-melodic note from the movement. Both melodic and harmonic conjunctions must sound together to be considered a match. As Figure 22.2 shows, evidence of melodic interval mirroring between Ein feste Burg and Variation XIII is overwhelming. For example, in measure 522 the Variation melody drops by a fourth from G on beat 1 to D on beat 2 with Ein feste Burg mirroring this melodic interval change on the same beats using the same notes. On beat two of measure 522, the two lower voices of the variation’s accompaniment descend by a second (B to A and D to C respectively) just as Ein feste Burg rises by a second (D to E), presenting one of many examples in this solution of contrary motion. In measure 523 the middle voice of Variation XIII begins on G, and by the end of beat 3 descends by a fourth to D. This same melodic interval change occurs in parallel motion with Ein feste Burg on the very same beats of measure 523, and again using the identical notes. It is not necessary to summarize each case here as the evidence literally speaks for itself. One key observation is the widespread application of melodic interval mirroring, contrary and similar motion furnishes indisputable evidence of a distinct contrapuntal fit between Ein feste Burg and Variation XIII.
Table 22.1 identifies 46 shared melody notes or melodic conjunctions between Ein feste Burg and Variation XIII. Over the course of 51 measures there are 115 melody notes in the variation (including grace notes), and 126 in Ein feste Burg, a difference of just 11 notes or 9 %.  It is fascinating there are 11 distinct letters in the title Ein feste Burg ist unser Gott. 46 melodic conjunctions represent 36.5% of Ein feste Burg, and 40% of the variation’s melody. Such high percentages of shared melodic notes could not merely be the result of the application of free rhythm. The rhythmic contours of Ein feste Burg are essentially dictated by the score of Variation XIII, so any attempt to describe this melodic solution in terms of free rhythm is misguided.  As with any successful counterpoint, the degree of incidence between two contrapuntal lines should remain sufficiently low to assure the independence of each voice. This technique is particularly important when the composer is attempting to conceal an unstated principal theme.

Melodic conjunctions begin in measure 522 and continue through the double bar at measure 553 where Ein feste Burg finishes one complete cycle. The conclusion of Ein feste Burg precisely at the double bar is not an isolated coincidence as this pattern appears in other variations containing double bars. In the first 32 measures (522 to 553), 13 measures or just under 41% lack any melodic conjunctions. With the recapitulation in measure 554 of both Variation XIII and Ein feste Burg, the same melodic conjunctions found in measures 494-502 recur through measure 535. In measure 564 with the modulation to E flat major, melodic conjunctions resume in measure 566 through 571. Of the 19 remaining measures beginning after the double bar at 553, 9 lack any melodic conjunctions. The total number of measures without melodic conjunctions is 22 or 43% of the 51 measures in this movement. This constitutes further evidence of a deliberate counterpoint.
It is fascinating that in Table 22.1 the phonetic spelling for God (G-D) is produced three times via melodic conjunctions over the first seven bars (522 - 528), and three more times in the recapitulation of those same seven measures (554-560). The triple repetition of the phonetic spelling for God taking place twice over seven measures alludes to the theological concepts of the trinity, and the close association of the number seven to God and the Sabbath. With a total of six phonetic spellings for God, this furnishes a numerical link in to the symbolic use of the number six throughout the Enigma Variations. The opening six measures of the Enigma theme are based on six melody notes, and the bass line in the same six bars is confined to six note letters. Six letter biblical terms appear as titles for the opening theme (Enigma) and two of the variations (Ysobel and Nimrod). The full title of the missing Principal Theme is six words in length. The musical checkerboard cipher embedded in the first six measures of the Enigma theme is based on a 6 x 6 solution grid. The opus number 36 for the Enigma Variations is the product of 6 times 6. Jesus spent six hours on the cross before dying, so the number six is closely associated with the crucifixion.
Jesus is the hidden Friend of Variation XIII. In an illuminating parallel, the term crucifixion has one x and three i’s. The Roman numerals XIII encode the initials for Jesus Christ. X stands for the 10th letter of the alphabet (J), and III for the 3rd letter (C). Clearly Elgar placed extraordinary emphasis on the number six by inserting multiple references to it in the score.  There are six letters in Christ. The number three is also relevant because of the placement of three asterisks in the title for the hidden friend, and the insertion of three of the four Mendelssohn fragments in quotation marks. Each of the Mendelssohn fragments consists of three discreet notes with the third repeated twice. The number three is central to Christian Theology because of the doctrine of the trinity, the three cardinal virtues, and the three days Jesus spent entombed before his resurrection. Elgar was a practicing Roman Catholic at the time he composed the Enigma Variations, so unmasking multiple allusions to Jesus in Variation XIII is unsurprising except perhaps to secular scholars who prefer to gloss over or completely ignore matters of faith.
Table 22.2 breaks down melodic conjunctions between Ein feste Burg and Variation XIII by note type. There are 10 types of shared melody notes with frequencies range from 1 to 15. 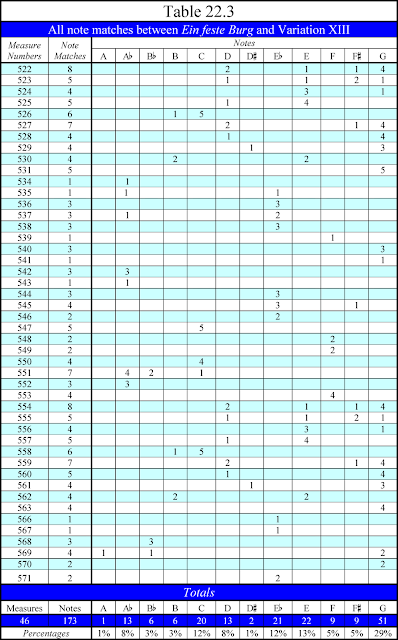 Conclusion
The preponderance of the evidence outlined in the above Figures and Tables demonstrates that Variation XIII is a clear and convincing counterpoint to Ein feste Burg. To learn more about the secrets behind the Enigma Variations, read my free eBook Elgar's Enigmas Exposed.

Posted by Robert Padgett at 2:21 PM