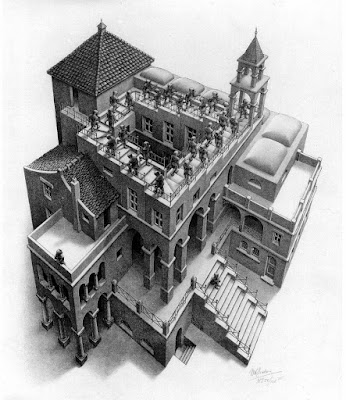 “Amidst the worldly comings and goings, observe how endings become beginnings.”
Lao-Tzu
A veritable phalanx of ciphers confirms the Covert Principal Theme to Elgar’s Enigma Variations is Ein feste Burg (A Mighty Fortress) by Martin Luther. Precisely how that gallant melody plays ‘though and over’ the Enigma Theme has been the subject of intense and prolonged deliberation. It was initially suspected a precise horizontal fit between both themes would be sufficient to substantiate this discovery, yet the absence of a credible counterpoint raised legitimate doubts about that melodic mapping. An alternative approach made it feasible to play Ein feste Burg over the Enigma Theme by applying free rhythm and varying its phrase order, producing a more credible vertical contrapuntal match. Even so, that mapping was greeted by some with skepticism. These and other questions fueled an ongoing reassessment, one that has now yielded an innovative charting of Ein feste Burg above the Enigma Theme by applying a rarely used contrapuntal device – retrograde motion. Before sharing this new contrapuntal mapping, it is advisable to consider how it was precipitated by two crucial breakthroughs.
The first key insight concerned just far Elgar’s counterpoint actually goes. The conventional wisdom as expressed by Dr. Clive McClelland asserts the counterpoint goes no further than the first six measures of the Enigma Theme, or merely the A section of its ABA ternary structure. The difficulty with that conjecture is it contradicts Elgar’s published position regarding the Enigma Theme’s actual length. In the late 1920’s he provided explanatory notes for a set of pianola rolls published in 1929. Regarding Variation I he wrote, “There is no break between the theme and this movement.”[1] That is a critical disclosure because it confirms the Enigma Theme does not terminate until Variation I begins in measure 20. 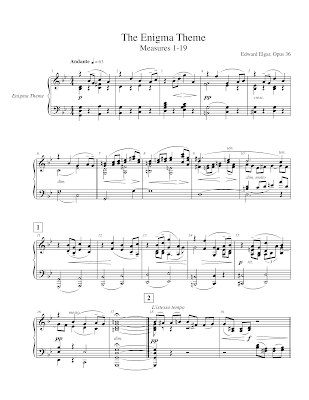 Based on his published statement, Elgar did not consider the two bar Bridge in measures 18 and 19 to be part and parcel of Variation I (something deceptively implied by the layout of the published score), but rather an elaboration of the Enigma Theme’s ending. A conspicuous tie between the notes of measures 17 and 18 validates this observation, linking the Enigma Theme and Bridge in a way not found in Variation I. The Bridge serves to unwind the Picardi cadence and return it back to the minor mode. Relying on Elgar’s published position, the correct melodic mapping of the Covert Principal Theme must account not only for the Enigma Theme’s Ternary ABA structure in measures 1 through 17, but also the two bar Bridge or C section in measures 18 and 19 that precede the launch of Variation I. In recognition of this fact, all alleged melodic solutions that neglect any part of the first nineteen measures of the Enigma Theme’s ABAC structure may be safely ruled out as invalid. This preclusion applies to the usual suspects as well as every solution now featured in Wikipedia’s article about the Enigma Variations. 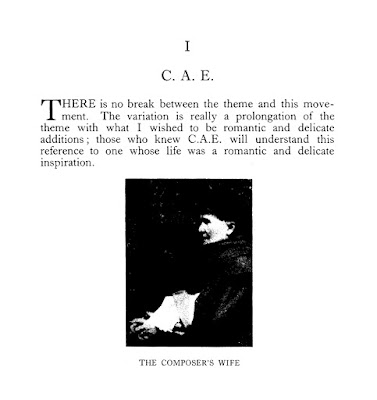 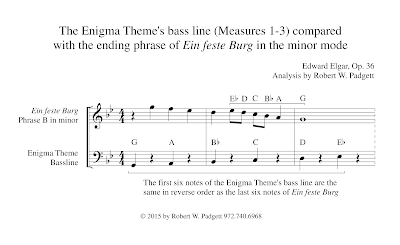 This notable correspondence raises the very palpable prospect Elgar composed his counterpoint with the unstated Principal Theme in retrograde. This would mean that rather than mapping out the missing melody forwards as everyone would naturally expect, Elgar adopted the opposite tact by crafting his counterpoint with the absent theme play backward.  The Enigma Theme’s ABAC structure subtly hints at this prospect because when read phonetically, ABAC sounds like aback. That term was originally used to describe when the sails of a ship are blown backward into the mast In present usage it refers to being taken by surprise. Both of those definitions – backward and surprised – would exquisitely express Elgar’s mapping of the Covert Principal Theme in retrograde over the Enigma Theme, not to mention his fondness for wordplay. The structure of the Enigma Theme hints at the strategy Elgar deployed to foil straightforward attempts at decoding his counterpoint. According to Kent Kennan, Professor Emeritus of Music at the University of Texas at Austin, retrograde motion is rarely encountered in fugal writing.[2] That Elgar was clearly contemplating various contrapuntal possibilities is reflected by the fact that on an early sketch of the Enigma Theme he wrote the phrase ‘for fuga’ above the first bar.[3] Fuga is another word for fugal. Considering the relative infrequency of retrograde counterpoint, mapping the Covert Principal Theme in this manner would be an extraordinarily effective tactic to foil detection.
After determining the scope of Elgar’s counterpoint and the potential of mapping the Covert Principal Theme from the end backward to the beginning, a new mapping of Ein feste Burg in retrograde over the entire nineteen measures of the Enigma Theme was completed. Starting at the end of the bridge (Measure 19), the Covert Principal Theme is played backward to the beginning with the reverse phrase order of BFEDCBA. The ending phrase (B) appears at both the opening and final cadence of the Enigma Theme with the opening phrase (A) deftly inserted over the Bridge. This mapping mirrors the minor and major modes employed by Elgar to camouflage the key of the Covert Principal Theme. Listening to this mapping with the Enigma Theme played in reverse makes it easier to recognize this chimerical version of Ein feste Burg. 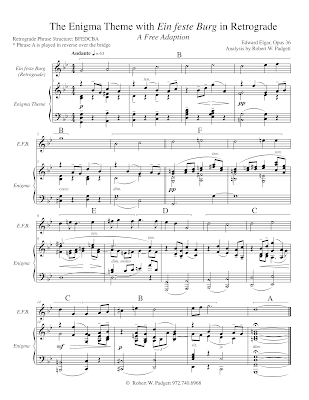 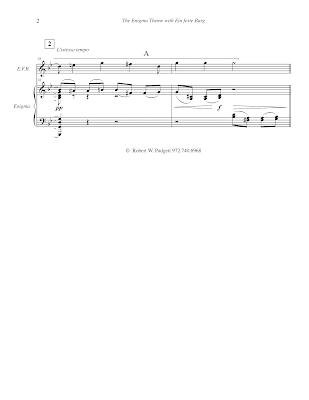 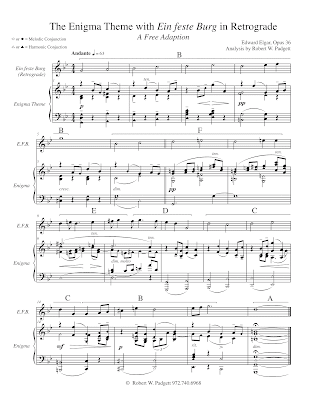 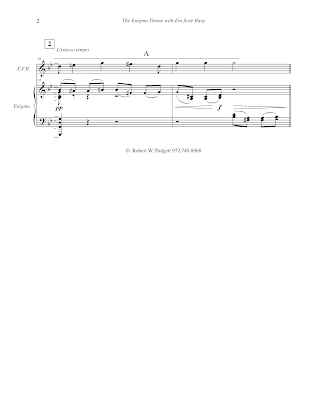 With this mapping, there are 30 matching melody notes, and 38 corresponding harmony notes dispersed over the Enigma Theme’s entire 19 measures. There is an average of 1.5 shared melody notes per measure with the highest concentration of seven in measure 14. On average there are two shared notes per measure between Ein feste Burg’s melody and non-melodic notes from the Enigma Theme’s piano reduction. The highest concentration of shared harmony notes is five, a figure found in both measures 13 and 15. The relatively regular distribution of shared melody and harmony notes between Ein feste Burg and the Enigma Theme is prima facie evidence for a retrograde counterpoint.

The version of Ein feste Burg used in Elgar’s retrograde counterpoint is culled together from multiple sources. A side by side comparison of Luther’s original composition with iterations by Bach and Mendelssohn reveals Elgar incorporated elements of all three to construct his hidden source melody. When combined with retrograde counterpoint, this ‘tribrid’ theme was undoubtedly constructed to complicate detection and description while paying homage to two paragons of the German School. Phrase A in measures 17 through 19 of the retrograde mapping is sourced from Mendelssohn’s more austere version characterized by rising and falling thirds, an attribute endemic to the A Phrase of the Enigma Theme. Phrase B in measures 14 through 16 bears the melodic imprimatur of Luther’s original hymn. Phrase C found in measures 12 through 14 matches up with both Bach’s and Mendelssohn’s versions which are virtually indistinguishable. Phrase D in measures 10 and 11 reflects Luther’s original as well as Mendelssohn’s faithful replica. Phrase E in measures 9 and 10 is based on Mendelssohn’s more florid adaption.  Phrase F in measures 6 through 8 and Phrase B in measures 1 through 5 both correspond with Bach’s rendering. 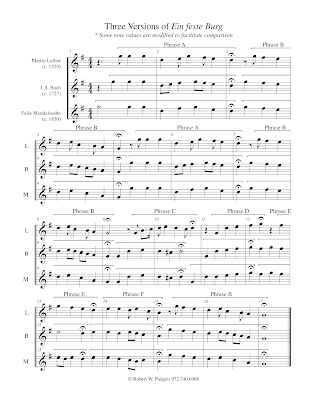 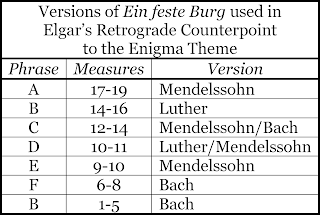 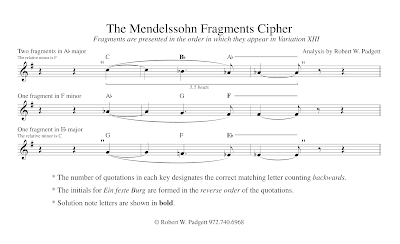 It is intriguing Elgar extracts and combines fragments from three forms of Ein feste Burg to create a unique fourth version – his own. With each version representing a distinctive musical dialect, this parallels Elgar’s use of four different languages in a Music Box Cipher embedded within the opening six measures of the Enigma Theme. That unique cipher, originally known as a Polybius square, is strongly hinted at by a literal square Elgar drew on the cover page of the score. 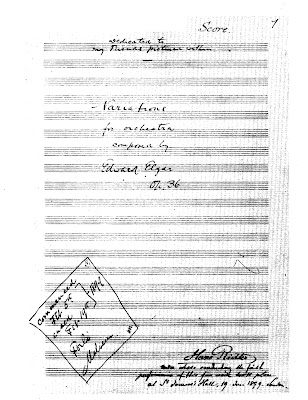 What makes that rather ordinary looking square so extraordinary is it overlays the very staff lines on the next page of the full score that introduce the Music Box Cipher. No other cover page from Elgar's body of works has this unique feature, rendering it all the more significant from a cryptographic vantage point. It should also be noted the square on the cover page encloses the start and end dates of the orchestration in the month of February which Elgar abbreviates as Feb. Those three letters are an anagram for EFB, the initials for Ein feste Burg. Rather than X marks the spot, Elgar elected to do so rather symbolically with a square enclosing not one but two instances of the Covert Principal Theme's initials. 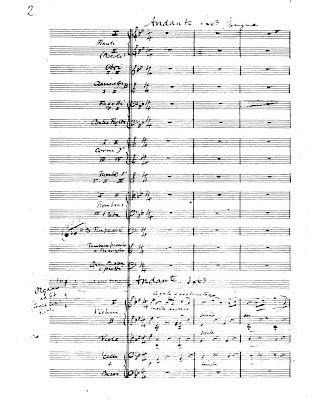 The cipher languages used in Elgar’s Music Box Cipher are English, Latin, German, and Aramaic. This is hardly a random assortment because the first letters of each language encode the composer’s last name: English, Latin, German, and Aramaic. Elgar signed his cipher apropos in code. Three of these languages appear in Bach’s St. Matthew’s Passion. The original title is in Latin: Passio Domini nostri J.C. secundum Evangelistam Matthæum which translates as “The Passion of our Lord J[esus] C[hrist] according to the Evangelist Matthew.” The initials from that title (JC) are encoded by the Roman Numerals of Variation XIII with X representing the tenth letter (J), and III the third (C). The libretto is in German sourced from Martin Luther’s translation of the Bible. There is one exception. When Jesus cries out his last anguished but unvanquished words on the cross, he quotes Psalm 22:1 in Aramaic, “Eli, Eli, lama sabachthani!” It is possible Bach’s masterpiece informed and inspired Elgar’s selection of three of the four languages found in his Music Box Cipher, leaving only one – English – as an obvious connection to own linguistic and cultural heritage.
There is an indelible link between Bach and Mendelssohn forged at a momentous performance in 1829 when Mendelssohn conducted the St. Matthew’s Passion, a masterpiece that had not been performed publicly in over a century. This proved to be watershed moment because it “resulted in a full-scale revival and reevaluation of Bach’s works throughout Germany and beyond, and a universal recognition of their genius and significance.” Mendelssohn’s interest in Bach extended beyond the arts, for they shared a common faith. It was on March 21, 1816 – Bach’s birthday – that Mendelssohn was baptized as a Lutheran. The Mendelssohn fragments in Variation XIII combined with a capital L used to identify that movement on an early sketch serve as markers pointing to the famed composer of Ein feste Burg, Martin Luther. Through their faith, music and language there is an unmistakable bond between Martin Luther, Johan Sebastian Bach, and Felix Mendelssohn. In the Enigma Variations, Elgar pays homage directly and indirectly to all three progenitors of the German School.
At the conclusion of the extended Finale, Elgar quotes a passage by Henry Wadsworth Longfellow from his Elegiac Verse. In Elgar’s script appears Longfellow’s prose, “Great is the art of beginning, but greater the art is of ending.” That literary fragment affirms the supremacy of the ending over the beginning, a feature reasserted by the coded recognition the ending phrase of Ein feste Burg marks the beginning rather than the end of Elgar’s counterpoint with the Enigma Theme via retrograde motion. The key to unraveling Elgar’s enigma is to begin at the end and work your way backward. To learn more about the secrets of the Enigma Variations, read my free eBook Elgar’s Enigmas Exposed.