I have not given any space to consideration of Elgar’s wanderings from the paths of contrapuntal rectitude, as laid down by the theory formalists. The Roman soldiers tied weights to their sandals when marching for exercise, that by discarding them in time of war they might rejoice in comparative lightness and freedom. So, it would seem, are musicians weighted in the study of strict counterpoint, that in free composition they may derive additional inspiration from the joy of casting the load aside. It may be suggested that Elgar has cast away not only the weights but also the sandals. The sequence of consecutive fifths in ‘The Apostles’ is calculated to make the old theorists uneasy in their graves. But this is only history repeating itself. The Man of Progress is necessarily the Breaker of Laws, and if the Law-breaker is justified by results, we can demand no more.

In 2007 Dr. Clive McClelland of Leeds University proposed the hymn Now the day is over by Sabine-Baring Gould as the hidden theme to Elgar’s Enigma Variations. A credible case can be made only if it can be shown that Now the day is over effectively satisfies six conditions Elgar gave describing the relationship between the Enigma Variations and the covert principal Theme. Obtained directly from Elgar’s recorded words by multiple, independent, unimpeachable sources, those six conditions are:

Any theme that violates just one of those six conditions must be ruled out as invalid.  The first and foremost test is to play a candidate melody “through and over” the Enigma Theme to assess whether there is credible evidence for both a contrapuntal and horizontal fit. Before attempting to do so it is first necessary to adapt a prospective melody to mirror the Enigma Theme’s shifts between the major and minor modes of G. These modulations are necessitated by the structure of the Enigma Theme which opens in G minor (measures 1-6), continues in G major (measures 7-10), returns to G minor (measure 11-16), cadences in G major (measure 17), and modulates back to G minor in the bridge leading to Variation I measures 18-19). Even when granting these generous accommodations to facilitate a contrapuntal mapping, the hymn Now the day is over flunks the test. 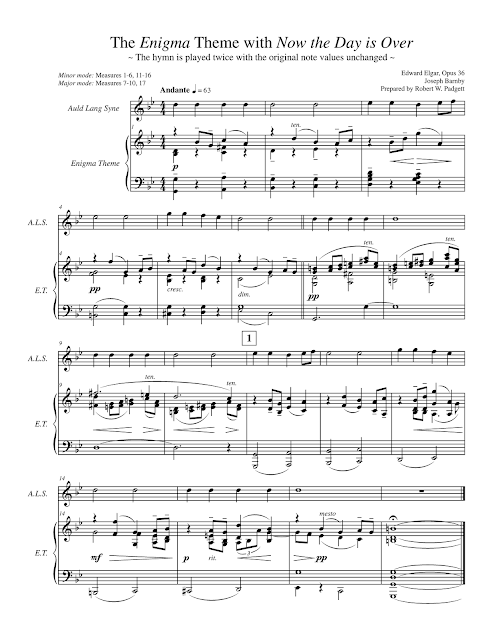 Now the day is over fails to produce a credible contrapuntal fit with the Enigma Theme, generating howling dissonances. Strike one. It does not even complete one full cycle. Strike two. On top of these difficulties, it has never been shown how it could conceivably play “through and over” the remaining movements. Strike three. Now the day is over is out of contention for the mysterious missing melody to the Enigma Variations.
The only theme ever shown to successfully satisfy all six of Elgar’s specific conditions is Ein feste Burg (A Mighty Fortress) by Martin Luther. A precise vertical and horizontal alignment between the two melodies is realized by Elgar's sophisticated treatment of Ein feste Burg as a retrograde counterpoint in an augmented form. Such an unconventional approach accounts for the profound difficulty in detecting a contrapuntal alignment because researchers invariably pair the beginning of a prospective melody with the beginning of the Enigma Theme. Such a predictable approach produces a mismatch even when the correct melody is considered.
The case for Ein feste Burg as the covert Principal Theme to the Enigma Variations is extensive and persuasive. Confirmation that Ein feste Burg is the hidden theme is given by a diverse range of music ciphers in the Enigma Theme and Variation XIII. Within the Enigma Theme is concealed a Music Box Cipher, Elgar’s "dark saying" linked to the Enigma mentioned in the original 1899 program note. Incredibly, Elgar did not take his secret to the grave, but rather enciphered the answer within the orchestral score to ensure its survival and organic connection to the work. When discovered, the decrypted answer would remain unguessed just as Elgar predicted. He even went so far as to encode the initials for the hidden melody in the Enigma Theme which modulates between the minor and major modes of G. It is truly remarkable the accidentals for those two keys (E-flat, F-sharp, B-flat) are the initials for Ein feste Burg. 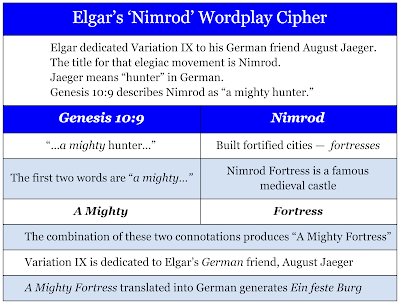 The odd nickname for Jaeger’s Variation (Nimrod) is an ingenious wordplay on title A Mighty Fortress. The tuning of the timpani for Variation IX encodes the initials for Ein feste Burg. When he gave a copy of Longfellow’s novel Hyperion to the conductor Hans Richter following the premiere, Elgar literally gave away the answer.  No wonder he suspected the solution would soon be discovered. Even the wrong date on the original score is a revealing clue since it falls on the anniversary of Luther’s death. According to a scale degrees cipher within the Mendelssohn fragments, the missing initials for Variation XIII (✡ ✡ ✡) are E. F. B. – the initials for Ein feste Burg. The mapping of Ein feste Burg over Nimrod is so self-evident that the melodic solution to Elgar's Enigma Variations is as plain a pikestaff. 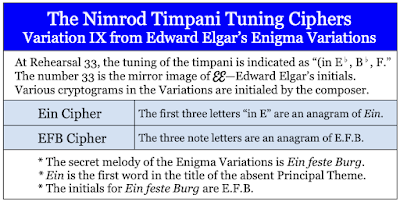 If he were alive today, Elgar's response to McClelland’s purported “solution” would undoubtedly be, “No, nothing like it. I do not see the tune you suggest fits in the least.” In contrast to this setback, McClelland nevertheless arrived at a number of stunningly accurate conclusions:
Although his proposed solution may have fallen short, McClelland's other conclusions are startlingly accurate and well reasoned. For that, he has my unqualified respect, and I suspect he would place special emphasis on the word unqualified. After all, I do not possess a music degree. But then neither did Elgar. The irony is Dr. McClelland is a university professor who simply did not do all of his homework. If he had, he would have never floated the absurd idea Elgar's counterpoint would be entirely free of dissonance. To learn more about the secrets behind the Enigma Variations, read my free eBook Elgar’s Enigmas Exposed.

Dr. McClelland may reply to this post at anytime, and his silence to date is conspicuous if not revealing. The Editor of The Musical Times and Julian Rushton are also invited to reply. Short of lacking a working Internet connection, I suspect the only reason why none of them have managed to do so by now is they are at a loss for words…not to mention coherent counterarguments.