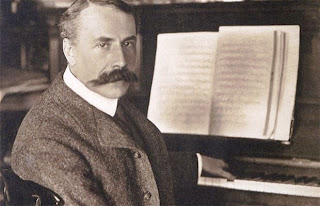 During railway journeys amuses himself with cryptograms; solved one by John Holt Schooling who defied the world to unravel his mystery.
Robert J. Buckley describing Edward Elgar in his 1905 biography


Edward Elgar first performed the Enigma Theme at the piano for his wife, Caroline Alice Elgar, on the evening of October 21, 1898. For this reason, the twenty-first of October is commemorated by Elgarians as Enigma Day. This year marks the 121st anniversary of that auspicious occasion. In acknowledgment of that private premiere, Elgar’s wife is the first friend portrayed within the Enigma Variations. The Enigma Theme is linked to her movement by a two-bar bridge, establishing a singular connection to that evocative melody that she singled out on that historic Friday evening.
Another movement that shares a prominent attachment to the Enigma Theme is Variation XIII, a Romanza with an austere title comprised of three enigmatic asterisks (***). This variation features three major melodic quotations and one minor adaption from Felix Mendelssohn’s concert overture Calm Sea and Prosperous Voyage (Meeresstille und glückliche Fahrt) Op. 27. Each fragment is performed pianissimo (very soft) or pianississimo (very very soft) to symbolize a calm sea. The ebb and flow of the tides are suggested by the accompaniment, an undulating ostinato that reprises the Enigma Theme’s palindromic rhythm of two alternating pairs of two eighth notes and two quarter notes.
The commingling of the Mendelssohn fragments with the Enigma Theme’s distinctive rhythmic motif implies a deeper connection between those two seemingly unrelated themes.  The Enigma Theme is a counterpoint to a famous yet absent Theme. In a similar vein, the title of Variation XIII is also absent. Unmasking the links between the Enigma Theme and Variation requires a mastery of music cryptography, an esoteric art that bewilders legacy scholars who stubbornly tout the conventional wisdom that the Mendelssohn fragments are entirely alien to the Enigma Theme. This superficial impression proves to be profoundly misguided.
My search for music cryptograms in the Enigma Variations was sparked by a marvelous discovery by Charles Richard Santa. A retired engineer and amateur musician, Santa realized the scale degrees of the Enigma Theme’s opening four melody notes in measures 1 and 11 encipher the mathematical ratio Pi. The scale degrees of the Enigma Theme's melody notes in measures 1 and 11 are  B-flat, G, C, and A in G minor. The scale degrees of those four notes are 3, 1, 4, and 2, respectively. Those scale degrees in melodic order are a coded reference to the number Pi that may be rounded from 3.1415 to four digits as 3.142.
The Enigma Theme Pi Cipher is remarkable because a circle has 360 degrees,  presenting a striking parallel with Enigma Variations’ opus number—36. Santa’s groundbreaking research disclosed for the first time how Elgar deftly inserted a cryptogram into the Enigma Theme, raising the tantalizing prospect of more ciphers. Elgar used the opening four melody notes from the Enigma Theme to encode Pi, providing a numeric convergence with the four-note Mendelssohn fragments in Variation XIII. Could there be other cryptographic connections between these two seemingly extraneous melodies?
There are a total of three Mendelssohn quotations in Variation XIII. Two quotations are in A-flat major, and the third is in E-flat major. A fragment is also performed by the brass section in F minor that lacks quotation marks because it departs from the original major mode.

The key letters of the Mendelssohn fragments are an anagram of a well-known music cryptogram (FAE) coined around 1853 by Joseph Joachim, one of the most celebrated violinists in England and Europe during the latter half of the 19th century. Mendelssohn served as Joachim’s mentor, introducing him to the British public in 1844 at just under 13 years of age in a command performance of Beethoven’s violin concerto for the Royal Philharmonic Society of London. An aspiring violinist in his youth and professional concert violinist as an adult, Elgar idolized Joachim as lucidly documented by Arthur Reynolds in the July 2007 issue of The Elgar Society Journal.
The inability of career academics such as Julian Rushton to detect such an elementary cryptogram hidden so nakedly within the Mendelssohn fragments is ample proof of a punctum caecum, a gaping blind spot in their scholarship. Absent an informed sensitivity to the existence of ciphers, career academics casually dismiss their likelihood on contrived grounds and exert no genuine effort to detect or decrypt them. The academic establishment missed the proverbial boat regarding the cryptographic significance of the Mendelssohn fragments.
The key letters of the Mendelssohn fragments form part of a much larger cache of cryptograms that divulge and authenticate the covert melodic Theme to the Enigma Variations and the secret friend memorialized in Variation XIII. While astonishing in their scope, these ciphers are entirely consistent with Elgar’s expertise in cryptography. This towering trait of his psychological profile merits an entire chapter in Craig Bauer’s recently published history of the world’s greatest ciphers, Unsolved! A meticulous analysis of the Mendelssohn fragments has so far netted twenty cryptograms. This impressive array of ciphers is listed below with links to their detailed descriptions and decryptions:
On the 121st anniversary of Enigma Day, it is a privilege to announce the discovery of the 21st cryptogram hiding just beneath the surface of the Mendelssohn quotations. This cipher is based on the accidentals in concert pitch from the A-flat and E-flat major Mendelssohn quotations. For this reason, it is called the Mendelssohn Quotations Accidentals Cipher.

An accidental changes a note’s pitch from the designated key signature. The term accidental is a bit of a misnomer as the designated pitch alteration is purely intentional. With Variation XIII set in G major, the accidentals in concert pitch for the A-flat major Mendelssohn quotation are B-flat and A-flat. Those for the E-flat Mendelssohn quotation are F natural and E-flat. These accidentals correspond to the written and sounding pitches for the Mendelssohn quotations. The discrete letters of those accidentals in alphabetical order are A, B, E, and F. Three of those letters are an anagram of the initials for the covert Theme, Ein feste Burg. The remaining letter is the first word in the title of the English translation, A Mighty Fortress. The initials for Joachim’s maxim may also be assembled from those accidentals, Frei aber einsam (Free but lonely).
Elgar demonstrated with his Dorabella Cipher conceived in 1897 that the glyph for a capital E may be reoriented to approximate a capital M. When the E is treated more flexibly in this manner, the English initials for the covert Theme’s title may be assembled from A, E, and F: A Mighty Fortress. The FAE Cipher derived from the key letters of the Mendelssohn fragments hints at a three-word German title for the covert Theme. The original title for A Mighty Fortress meets those criteria because it is three words in German. The FAE Cipher further highlights two of the three initials for Ein feste Burg with the sole point of divergence being between the contiguous letters A and B. 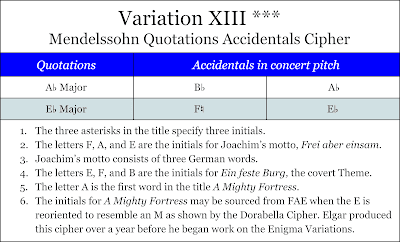 Various cryptograms embedded within the Enigma Variations feature Elgar’s initials. The Mendelssohn Quotations Accidentals Cipher adds another to this growing category with the repeated E-flats in the third Mendelssohn quotation. Other examples that display his initials are the Enigma Theme Psalms Cipher and the Enigma Theme Locks Cipher. Elgar’s initials undoubtedly serve as a form of authentication for those cryptograms.
The absent letters signified by the three asterisks intimate the presence of those initials somewhere in Variation XIII.  The anomalous Mendelssohn fragments pinpoint where to look for those missing letters. The first set to emerge is FAE, the initials for Joachim's maxim. This famous music cryptogram was popularized by the F-A-E Violin Sonata composed for Joseph Joachim by Robert Schumann, Johannes Brahms, and Albert Dietrich. The Mendelssohn Quotations Accidentals Cipher further revealed these same initials and those for the common three-word titles of the covert melody in both German and English. There is an elegant continuity and efficiency to Elgar's use of four accidentals in three four-note Mendelssohn quotations to encipher three sets of three initials.
The Mendelssohn fragments ingeniously encipher the German initials (E. F. B.) for the covert Theme. This is achieved by converting the number of statements of a Mendelssohn fragment in a given key and converting it to the corresponding scale degree of that key. There are two fragments in A-flat major, one in F minor and one in E-flat major. The second scale degree in A-flat major is B-flat. The first scale degrees of F minor and E-flat major are F and E-flat, respectively. The letters of those scale degrees are B, F, and E. This reverse decryption of Ein feste Burg’s initials serves as a significant clue because the covert Theme plays as a retrograde counterpoint "through and over" the Enigma Theme. 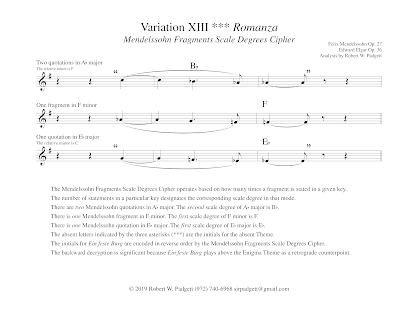 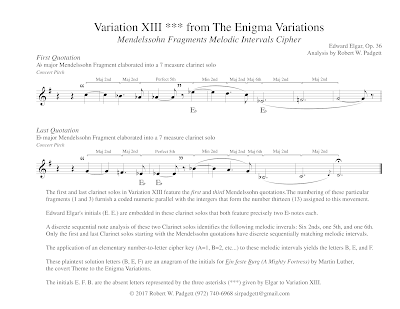 Elgar's decision to quote music by Felix Mendelssohn in the Enigma Variations decisively refutes the presumption that his Roman Catholicism would ostensibly bar him from citing the work of a Protestant composer. Although born to Jewish parents, Mendelssohn was baptized a Lutheran on the anniversary of another prominent Lutheran’s birth, Johann Sebastian Bach. The FAE Cipher formed by the Mendelssohn fragments' key letters hints at another Jew who was baptized a Lutheran, the famed violin virtuoso Joseph Joachim. Both of these musicians were composers whose shared Lutheranism implicates the composer of the covert Theme, Martin Luther. The four Mendelssohn fragments are a calculated set of clues because Mendelssohn cites Ein feste Burg in the fourth movement of his Reformation Symphony followed by a  set of variations. This realization would readily explain why Elgar suspected the absent Theme would soon be spotted. To learn more about one of Elgar's greatest symphonic works, read Elgar’s Enigmas Exposed.
Soli Yah Gloria
Posted by Robert Padgett at 6:49 AM