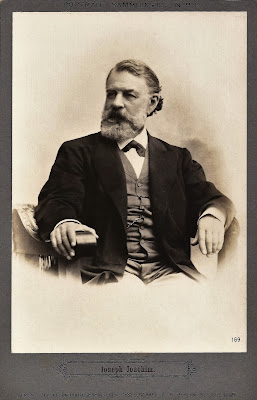 Whenever I had the opportunity of hearing Joachim play, I always felt as though he were a priest, thrilling his congregation with a sermon revealing the noblest moral beauties of a theme which could not help but interest all humanity.
Leopold Auer

There are three names openly referenced in connection with the Enigma Variations that invite being categorized as a distinct subset because they possess dual initials.  As the composer, Edward Elgar takes precedence as the first in this discrete group with the double initials E. E. The second is specifically mentioned by Elgar in the original 1899 program note, the poet and playwright Maurice Maeterlinck with the matching initials M. M. The third appears at the conclusion of the original Finale where Elgar paraphrases the renowned Italian Renaissance poet Torquato Tasso whose initials are T. T. In all, there are three names with dual initials overtly identified in association with the Enigma Variations: The composer Edward Elgar, the playwright Maurice Maeterlinck, and the poet Torquato Tasso.
A fourth name with matching initials is covertly implicated by a music cipher in Variation XIII. This relatively simple cryptogram is constructed from the putatively extraneous Mendelssohn fragments drawn from his concert overture Meeresstille und glückliche Fahrt (Calm Sea and Prosperous Journey). These fragments are framed in the contrasting keys of A flat major, F minor, and E flat major. The key letters F-A-E are a noteworthy music cryptogram sourced from the initials of the German romantic motto, “Frei aber einsam.” The translation of that phrase is, “Free but lonely.” It was popularized by the renowned 19th-century violinist Joseph Joachim, a protégé of Mendelssohn who conducted his London debut with the Royal Philharmonic Society during May 1844 in a performance of Beethoven’s Violin Concerto. From that time until his death in 1907, Joachim remained a favorite of British audiences. It is exquisitely appropriate and fitting that Elgar would encode Joachim’s motto using his mentor’s music. This FAE Mendelssohn Cipher reveals the fourth and final set of double initials (J. J.) for Joseph Joachim.
It is extraordinary that Joachim’s initials precisely match those of an alias adopted by Martin Luther when he was forced into hiding at Wartburg Castle.  To conceal his identity, Luther exchanged his austere priestly attire for that of a wealthy noble, assuming the name Junker Jörg (Knight George). Luther composed Ein feste Burg, the battle hymn of the Reformation. There is mounting cryptographic and contrapuntal evidence that this heroic hymn is the covert Theme to the Enigma Variations. While masquerading as Knight George, Luther was ensconced within the confines a literal mighty fortress. It is intriguing that at the time Elgar suddenly began work feverishly on the Enigma Variations in October 1898, he was seriously planning a major symphonic work in honor of General Gordon whose middle name happens to be George. Joachim’s dual initials clearly serve as double clues concerning both the identity of the covert Theme’s composer and its title. Mendelssohn was baptized a Lutheran on March 21, 1816, and remained a staunch adherent for the remainder of his life. Like his mentor, Joachim was also a Lutheran. Elgar’s open references to Mendelssohn and coded allusion to Joachim in Variation XIII provide compelling and multilayered references to Luther. That would explain why Elgar initially identified this movement with a solitary capital L, and only added years after the fact the letters ML, the initials for Martin Luther.
It has been shown that in connection with the Enigma Variations, Elgar makes overt references to three names with dual initials (Himself, Maeterlinck, and Tasso), and one coded reference to a fourth (Joachim) in Variation XIII. The letters for these dual initials (E. E., M. M., T. T., J. J.) do not appear to encipher any discernable plaintext message. Delving a layer deeper, the national heritages of these individuals were next considered as summarized in the table below:

There is an extraordinary acrostic anagram hiding in plain sight among the initials of the nationalities of these famed personages. Five of the six initials from this particular set of nationalities precisely match those of the covert Theme’s German title: Ein Feste Burg Ist Unser Gott. The absent U is stealthily provided by the German description for Joachim’s Jewish heritage because the German word for Jew (Jude) is pronounced “U-dah.” Phonetic spellings are a hallmark of Elgar’s unconventional writing style, something born out by his personal correspondence and the decryptions of numerous cryptograms in the Enigma Variations. For the subtitle of his rousing Finale, Elgar relied on the German rendering of his name (Eduard) for his unusual initials (E. D. U.) to phonetically reproduce the pet name “Edoo” given to him by his wife. The presence of a phonetic plaintext in the decryption of the Dual Initials Enigma Cipher bears Elgar’s cryptographic fingerprint. It is particularly significant because it relies on translating an English word into German, something also called for with the decryption of his Nimrod Wordplay Cipher.

Through a subset of initials distinguished by matching pairs of letters, Elgar brilliantly encodes another set of initials for the covert Theme’s title using the first letters of the attendant national and ethnic identities. This is a cleverly concealed acrostic anagram cipher. His use of four names in the Dual Initials Enigma Cipher to encode six solution letters presents a revealing numeric convergence because the title of the covert Theme originates from Psalm 46, a chapter made up of the integers 4 and 6. To learn more about the secrets behind one of Elgar’s most celebrated symphonic achievements, read my free eBook Elgar’s Enigmas Exposed.