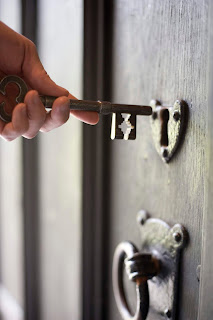 Life is a succession of lessons which must be lived to be understood. All is riddle, and the key to a riddle is another riddle.
Ralph Waldo Emerson
The Enigma Variations by Edward Elgar is more than just than a symphonic tour de force: It is a stealth homage to music cryptography. Elgar’s expertise in cryptography—the art of creating and decoding secret messages—is beyond dispute. Craig Bauer, the editor in chief of the journal Cryptologia, devotes an entire chapter to Elgar’s obsession with secret codes in his recently released book Unsolved! An exhaustive analysis of Elgar’s breakout orchestral masterpiece uncovered scores of ciphers which encode specific and definitive solutions to its paramount riddles concerning the hidden melody, the Enigma Theme’s “dark saying,” and the secret friend memorialized in Variation XIII.
One remarkable example of Elgar's musical cryptographic prowess is the Enigma Locks Cipher. This cryptogram is ensconced in the opening six bars of the Enigma Theme. The insertion of a double bar at the end of measure 6 precipitated its discovery because such a feature usually appears at the end of a movement or section rather than in such close proximity to the beginning. The only parts assigned notes in the Enigma Theme’s first six bars form the string quartet: Violin I, Violin II, Viola, and Cello. An evaluation of the number of noteheads for these separate parts quickly revealed none exceed the total letters in the English alphabet. The first violins play 24 written notes, the second violins 17, the violas 15, and the cellos 12. This realization raised the prospect of an elementary number-to-letter cipher in which a numeral is converted into its corresponding letter in the alphabet.
The application of a number-to-letter key (1 = a, 2 = b, 3 = c, etc.) to the notehead totals for each of the string parts in the Enigma Theme’s opening six bars produces the plaintext solution LOQX. This is a phonetic rendering of the word locks. Elgar’s personal correspondence is rife with phonetic spellings, and consequently, such a decryption bears his cryptographic fingerprints. Like a cipher, a lock is opened by a key. In its plural form, the term locks implies there are multiple keys required to decode the Enigma Theme. 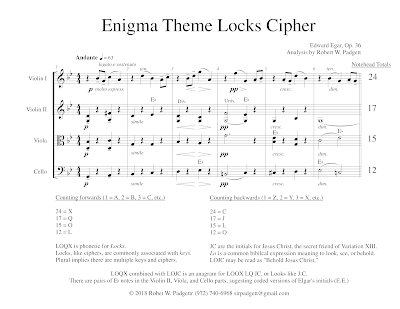 Could the musical keys of the Enigma Theme hold the key to unlocking Elgar’s melodic vault concerning the secretive principal Theme? The discovery of the Enigma Locks Cipher prompted an assessment of the musical keys in which the Enigma Theme is played. This opening movement repeatedly modulates back and forth between G minor and G major, a smokescreen clearly intended to camouflage the source melody’s mode. The accidentals for these two keys are B flat, E flat, and F sharp. Those three letters turn out to be an anagram of the initials for Ein feste Burg, the covert melodic principal Theme. The decryption of the Enigma Locks Cipher led to the discovery of the Enigma Keys Cipher, a complementarity that authenticates them both as genuine. 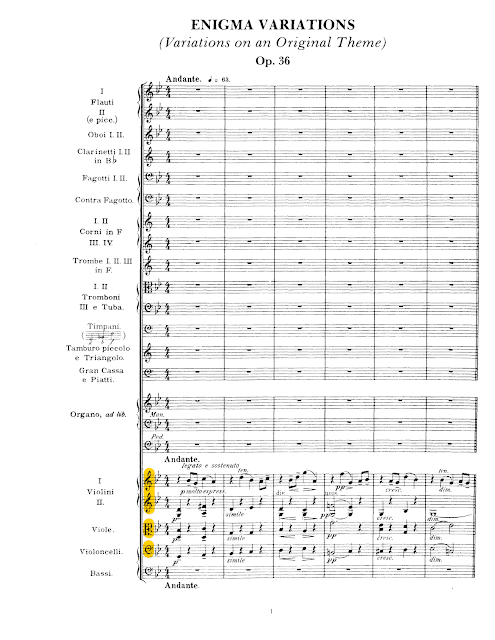