Whoever has seen me has seen the Father.

Jesus speaking to his disciples
John 14:9

And he said, “Abba, Father, all things are possible for you. Remove this cup from me. Yet not what I will, but what you will.”

Jesus praying at Gethsemane on the eve of his arrest and crucifixion
Mark 14:36 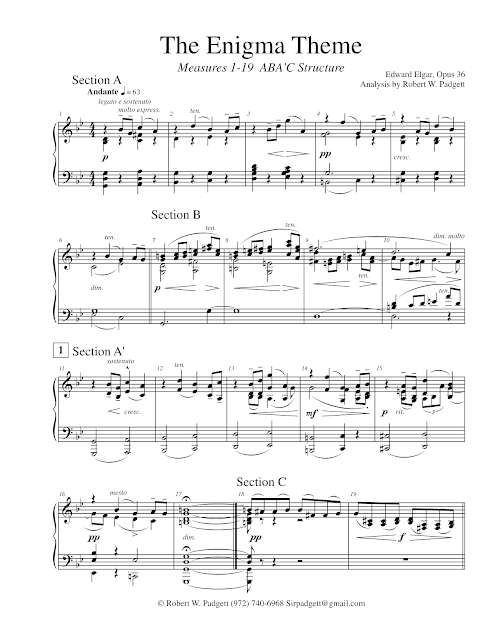 The number four turns up repeatedly in connection with Elgar’s use of the Mendelssohn fragments in the fourteenth movement, Variation XIII. There are four Mendelssohn fragments. Each quotation is comprised of four notes. The original German title of Mendelssohn’s overture —  Meeresstille und glückliche Fahrt — is four words. Variation XIII is set in G major, and the fourth scale degree of that key is C which is also known as the subdominant. That particular note presents a phonetic parallel with the Mendelssohn fragments because they sonically portray the sea, a word that sounds indistinguishable from the letter c.
The number four is also closely associated with the Enigma Theme’s unconventional melodic structure. Its 4/4 time signature may also be represented by a capital “C” which stands for common time. As previously observed, the letter C is a phonetic rendering of sea which is sonically symbolized by the four Mendelssohn fragments in Variation XIII. The opening six measures of the Enigma Theme are framed in G minor. This is the first of four parts in an ABA’C format with the first labeled Section A. As previously observed, the four notes that comprise the A-flat major Mendelssohn fragments (C, B-flat, and two A-flats) are an anagram of the Enigma Theme’s ABA’C structure.
The Enigma Theme’s brooding melody in Section A consists of unusual four-note groupings of alternating pairs of eighth notes and quarter notes separated by regularly spaced quarter rests on the downbeat of each bar. Section B commences in measure 7 with a rosalia modulating sequence in the parallel G major mode, the same key as Variation XIII. The opening thematic material in Variation XIII consists of three descending perfect 4ths, an interval also granted a marked emphasis in the Enigma Theme’s B Section. The melody in Section B begins with a rising four-note linear scale sequence covering a perfect fourth followed by a rising and falling perfect 4th. This six-note rosalia formula is repeated four times over four measures with six melody notes per bar.
There are four melody notes per bar in Section A which is six measures in length. These figures are reversed in Section B which is four measures long and has six melody notes per bar. The pairing of the number of melody notes per bar (4 and 6) with the number of measures in Sections A and B (6 and 4 respectively) is indeed a cipher that encodes the number 46. That number is significant because Martin Luther drew inspiration from Psalm 46 to compose his rousing hymn Ein feste Burg, the covert Theme to the Enigma Variations. To ensure that a specific chapter number was linked to that particular Psalm, Elgar enciphered the word Psalm in the performance directions of the Enigma Theme’s first measure as an acrostic anagram and even went so far as to include his initials in the decryption. Remarkably, there are precisely 46 characters in Elgar's Enigma Theme Psalm Cipher. It is also extraordinary that the number of letters in the phrase “dark saying” first introduced by Elgar in the original 1899 program note concerning the Enigma Theme are 4 and 6 respectively. His carefully chosen words harbor layers of cryptographic meaning. 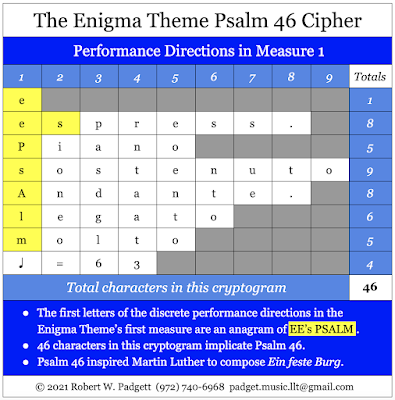 The number of melody notes in parts A and B of the Enigma Theme is identical (24), a figure that precisely matches the total number of letters in the covert Theme’s complete German title — Ein feste Burg ist Unser Gott. Section A is reprised at measure 11 in a more embellished format with counter-melodic material and a more sustained accompaniment, concluding in measure 17 with a Picardy third in G major. As a result of these modifications, the repetition of this first section is identified as A’ or A prime. This is followed by Section C, a two-bar bridge in measures 18 and 19 that circles back to the G minor mode followed by a double barline that marks the terminus of the Enigma Theme. It is known with complete certainty that Section C forms the fourth and final component of the Enigma Theme because Elgar specified so in writing. In the late 1920’s he provided descriptive notes for a set of pianola rolls published in 1929. Regarding Variation I he wrote, “There is no break between the theme and this movement.” That is a critical disclosure as it confirms the Enigma Theme does not terminate until Variation I begins. This is most definitely measure 20 where the first variant of the Enigma Theme is introduced. 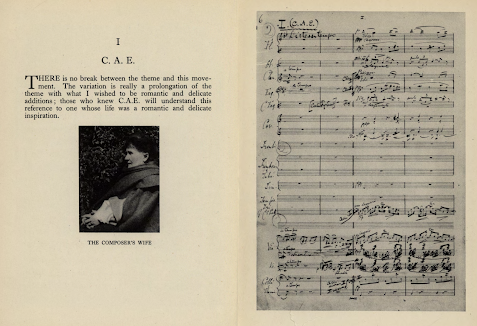 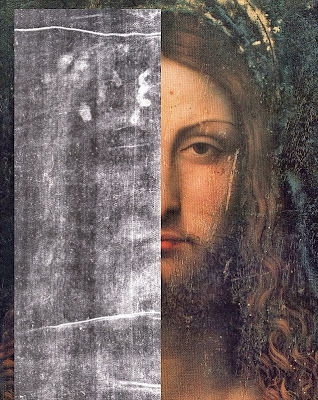 I mainly use the treble clef, ( https://musicadvisor.com/treble-clef/ ), with the instruments that I play. It's nice to read about the other clefs. This very informative, and I believe this will help a lot of people who wishes to understand them. Keep up the great work!