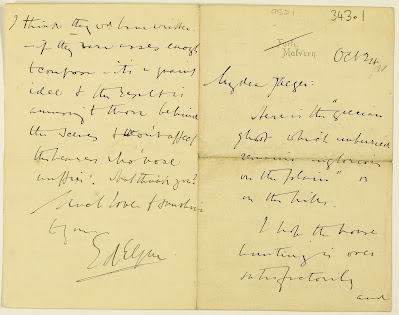 Since I’ve been back I have sketched a set of Variations (orkestry) on an original theme: the Variations have amused me because I’ve labelled ’em with the nicknames of my particular friends – you are Nimrod. That is to say I’ve written the variations each one to represent the mood of the ‘party’ – I’ve liked to imagine the ‘party’ writing the var: him (or her) self & have written what I think they wd. have written – if they were asses enough to compose – it’s a quaint idee & the result is amusing to those behind the scenes & won’t affect the hearer who ‘nose nuffin’. What think you?

Edward Elgar in an October 24, 1898 letter to August Jaeger

The autographed score of Variation IX (Nimrod) from Edward Elgar’s Enigma Variations has a metronome marking of 66 quarter beats per minute. The published score reduces that figure to 52 which results in a noticeably slower tempo. Julian Rushton draws attention to this and other discrepancies between the autograph and published scores in the August 2019 issue of The Elgar Society Journal. Remarking on the recovery of a lost score of the Enigma Variations once belonging to August Jaeger, Rushton opines, “...nothing bears on the ‘enigma’ — unless, that is, something can be deduced from additional information on Elgar’s indecision about the order of the variations, and metronome markings that differ from the published score…” The differences make all the difference as the following analysis unveils. 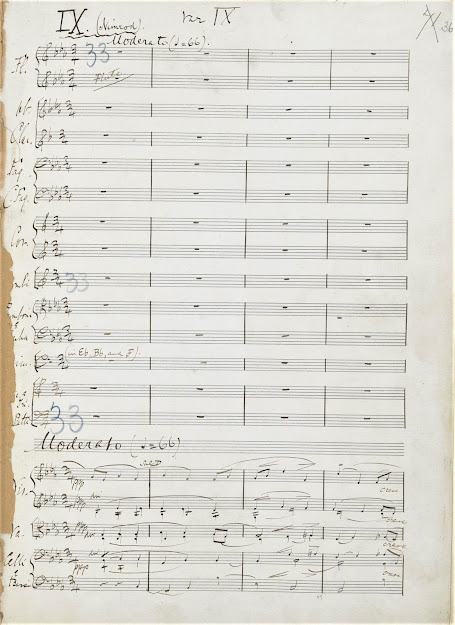 My original research found that the fifth and final ordering of the variations produces a remarkable matrix of proximate title letters ciphers. These and other cryptograms encode answers to the core questions posed by the Variations concerning the absent principal Theme, a cryptic “dark saying” concealed by the Enigma Theme, and a secret friend commemorated in Variation XIII. Based on these intriguing discoveries, it is reasonable to suspect that the tempo variance between the autographed and published scores of Nimrod may be yet another cipher. 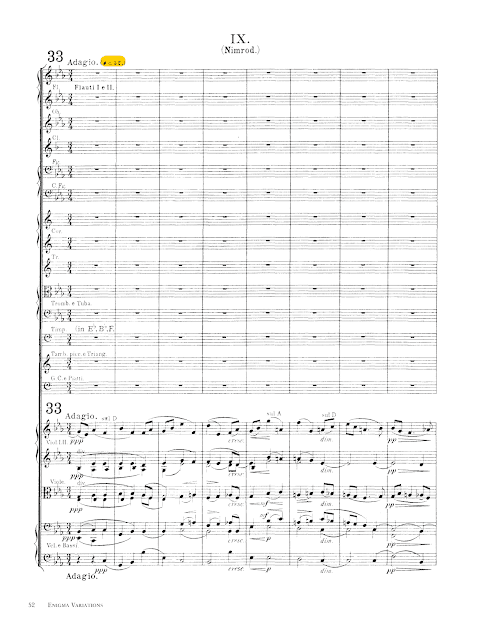 Simon Singh remarks that cryptograms are often cracked by exploiting their anomalies. The differences in tempo between the autographed and published scores of Variation IX is one of those illuminating inconsistencies.  The discrete numerals in these divergent tempo markings (52 and 66) are 2, 5, and 6. When those unique numbers are converted into their corresponding letters of the alphabet employing an elementary number-to-letter key (1 = a, 2 = b, 3 = c, etc…), they become B, E and F. Those are the initials of Ein feste Burg (A Mighty Fortress), the covert Theme to the Enigma Variations.

This is not the only cipher at the beginning of Variation IX. The tuning of the timpani is indicated at Rehearsal 33 as E-flat, B-flat, and F. Those three note letters are also an anagram of the hidden theme’s initials — E.F.B. Indeed, a distinct subset of cryptograms within the Enigma Variations encipher those three letters hinted at by three asterisks that form the title of Variation XIII.  For instance, the Enigma Theme is written in the parallel modes of G minor and G major. The accidentals for those keys are F-sharp, B-flat and E-flat. The Enigma Theme’s keys are the key to unlocking Elgar’s melodic safe because they encipher the initials of the hidden melody. To learn more about the innermost secrets of the Enigma Variations, read Elgar’s Enigmas Exposed.