The 'Elegy' Cipher in Elgar’s Enigma 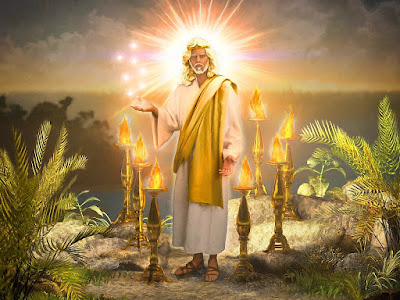 Musica lux in tenebris.
(Music is light in darkness)
Hans Richter
“The land of Zebulun and the land of Naphtali,
the way of the sea, beyond the Jordan, Galilee of the Gentiles—
the people dwelling in darkness
have seen a great light,
and for those dwelling in the region and shadow of death,
on them a light has dawned.”
Matthew 4:14-16 citing Isaiah 9:1-2

The British Romantic composer Edward Elgar composed a coruscating set of symphonic variations between October 1898 and July 1899 that is popularly known today as the Enigma Variations. The bulk of this orchestral tour de force was completed between October 21, 1898, and February 19, 1899. After the June 19 premiere under the Wagnerian protégé Hans Richter, Elgar appended 96 bars to the final movement in July 1899 to produce a more audacious and triumphant finish. At the end of the extended coda, he penned a quotation from stanza XIV of Henry Wadsworth Longfellow’s Elegiac Verse, “Great is the art of beginning, but greater the art is of ending.” In Elgar’s case, Longfellow’s proclamation proved to be an acute understatement.
The Enigma Variations are puzzling for three overarching reasons. First, the famous melody that serves as the cornerstone of its foundation is absent and unheard. The Enigma Theme’s despondent and uplifting strains are a counterpoint to that renowned but secretive tune. Second, Elgar asserted the Enigma Theme harbors a “dark saying.” Those familiar with his lifelong obsession with cryptography—the art of encoding and decoding messages—reasonably interpret this cryptic phrase as an acknowledgment of a musical cipher ensconced within the Enigma Theme. Elgar’s nebulous language is code for a code because “dark” can mean hidden or secret, and a “saying” is a coherent series of words. Third, each movement is publicly dedicated to one of Elgar’s friends using their initials, name, or nickname with one notable exception. Variation XIII has in place of a friend’s initials three asterisks (***) in the form of hexagrammic stars. The Enigma Variations are then infused and confused by these three essential secrets: An absent melody, a coded message, and a mysterious friend.
Career academics throw up their hands and frontal cortices in capitulation when it comes to navigating Elgar’s labyrinthian schema of cloaked counterpoints, clandestine ciphers, and a covert confidant. Most insist that Elgar’s contrapuntal riddle is an impenetrable fortress as he allegedly took his secret to the grave. Michael Kennedy ruminates, “People have ingeniously been trying to guess the tune ever since, a harmless but pointless recreation since the secret, if there was one, died with him.” J.P.E. Harper-Scott echoes that staid opinion more a bit more flare:
Although human nature guarantees that attempts to solve it will never end until the Ark of the Covenant and the Holy Grail are on permanent display in the British Museum, they all somehow fail to convince. It is easy to carp, since the riddle cannot be answered now its perpetrator is dead, but the evidence supporting all of the ‘solutions’ is weak.
If besieged by such an impotent mindset, the British would have never cracked the Wehrmacht’s Enigma machine at Bletchley Park during World War II. That black box was christened Enigma by its inventor in honor of Elgar’s breakout symphonic coup. The truth is the British did not solve the Enigma cipher on their own. Without the advanced work and research of such brilliant Polish mathematicians as Marian Rejewski, they would have been grasping vainly in the dark to decrypt German secret communiques at the onset of hostilities. How ironic that the British academic establishment of yesteryear that so boldly attacked Germany’s military cipher with scant exception now sits idly behind a Maginot Line of impuissant ignorance waving the white flag of surrender.
Similar to white flags waving in the breeze, ocean waves whipped up by the winds are capped by white crests of frothing foam. Elgar invokes the sea in Variation XIII by quoting a four-note melodic fragment from Felix Mendelssohn’s concert overture Calm Sea and Prosperous Voyage. Meeresstille und glückliche Fahrt is the original German title drawn from two short poems by Johann Wolfgang von Goethe, a friend and patron of the youthful Mendelssohn. These Mendelssohn quotations are anomalous as they come from an extraneous work unrelated to the Enigma Theme and its ensuing movements. There are three Mendelssohn fragments enclosed by quotation marks because they mirror the major mode of the source melody. A  fourth is devoid of quotations because it ventures into the minor mode. 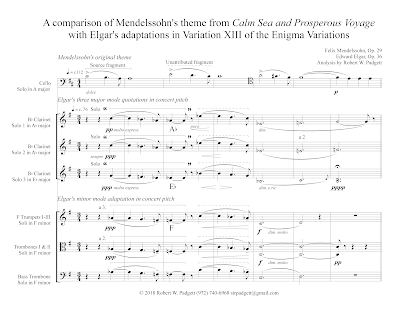 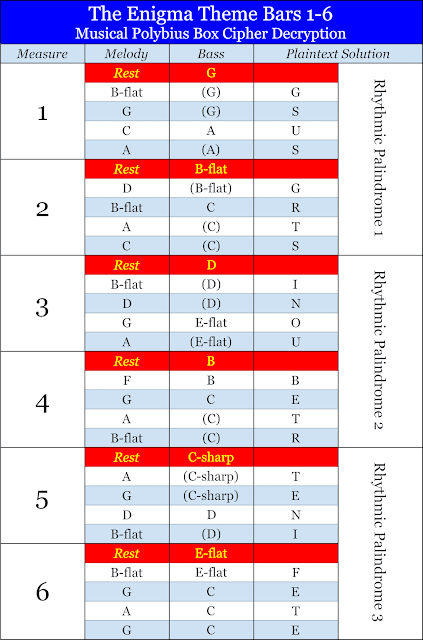 The 24-letter plaintext solution is a grand anagram of the full German title of the covert Theme: Ein feste Burg ist Unser Gott. The four languages Elgar utilized in this cryptogram are English, Latin, German, and what he thought was Aramaic. The decryptions from each of the six bars consist of four-letter groupings. This poses a numeric parallel with the Mendelssohn fragments in Variation XIII as there are four fragments, and each one has four notes. Those melodic incipits are performed above a pulsating ostinato that reprises the Enigma Theme’s palindromic rhythm of alternating pairs of eighth notes and quarter notes. Elgar’s use of four different languages was ostensibly intended to harden his cipher and foil decryption. Incredibly, these four languages are an acrostic anagram of ELGAR with the inclusion of the r in Aramaic.
English
Latin
German
Aramaic
Complete confidence may be vested in the solution to the Enigma Theme Polybius box cipher because Elgar stealthily autographed his handiwork with a second layer of encryption only detectable after the full solution of the first layer is realized. Elgar’s autograph authenticates the cipher and its resolution. A complete analysis of Enigma Theme Music Box Cipher delves into its many intriguing facets and connections to other cryptograms within the Enigma Variations.
There is another remarkable acrostic anagram associated with these four cipher languages as their first letters may be reshuffled as ELAG. That is a phonetic spelling of elegy. This mirrors the plaintext solution to bar 1 of the Enigma Theme because “gsus” is a phonetic version of the secret friend’s first name, Jesus. When the languages from the full decryption are listed in order of appearance from bars 1 through 6 followed by the German from the anagrammatic solution, it produces the following list:
English
Latin
English
English
Aramaic
English
German
The first letters of those four languages are an acrostic anagram of ELAGEEE, another phonetic rendering of elegy. This finding is consistent with Elgar’s personal correspondence that bristles with inventive phonetic spellings.
Elegy is defined by Merriam-Webster as “a song or poem expressing sorrow or lamentation especially for one who is dead.” This meaning is apropos because the death of Elgar’s famous friend is memorialized in Variation XIII. In that movement, Elgar quotes a fragment from Mendelssohn’s concert overture Calm Sea and Prosperous Voyage (Meeresstille und glückliche Fahrt) to portray a ship crossing the open sea. This sonic symbolism was inspired by the poetry of the famed German playwright Goethe whose seemingly benign image of a boat adrift on a windless sea depicts the stillness of death (Todestille). This cadaverous imagery is bolstered by the bass line in Variation XIII where four and five bars after Rehearsals 55 and 59 the notes spell D-E-A-D. This term also surfaces in Elgar’s solution (“He who fears is half dead”) to John Holt Schooling’s allegedly unbreakable Nihilist cipher published by The Pall Mall Gazette in April 1896.
The specter of death looms over the Enigma Variations. The six-word dedication begins with a homonym of dead, “Dedicated to my Friends pictured within.” The silence of the principal Theme is evocative of a passage from Psalm 31:17 that mentions the silence of the grave. For Elgar, there was an indelible link between music and death because as a boy he studied musical scores at a local churchyard while resting on a tombstone. In the original program note for the 1899 premiere of the Enigma Variations, Elgar likens the absent principal Theme to the mysterious protagonist who never appears onstage in various dramas by the Belgian playwright, Maeterlinck. That absent character is death, a central element in Maeterlinck’s works described as “marionette” plays as the characters rarely move.
Another definition of elegy is “a short pensive musical composition.” This is an apt characterization of the mood and length Enigma Theme at merely nineteen measures. The opening six bars of the Enigma Theme are scored solely for strings, a trait that emerges later in a brief work composed by Elgar in 1909 entitled Elegy. There is another remarkable link between the Enigma Theme Elegy Cipher and Variation XIV (E.D.U.). At the end of the extended Finale, Elgar cites a passage from stanza XIV of Longfellow’s Elegiac Verse: “Great is the art of beginning, but greater the art is of ending.” Merriam-Webster defines elegiac as “of, relating to, or comprising elegy or an elegy.” Based on this newly emerged acrostic anagram from the languages found in the decryption of the Enigma Theme Polybius box cipher, it may be safely concluded that both the Enigma Theme and Variation XIII are musical elegies. To learn more concerning the secrets of the Enigma Variations, read my free eBook Elgar’s Enigmas Exposed.
Soli Yah Gloria 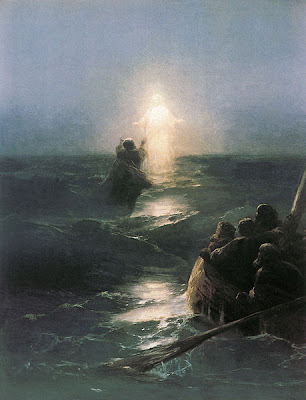