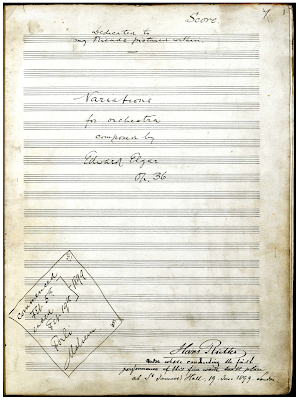 The Enigma I will not explain – it’s ‘dark saying’ must be left unguessed, and I warn you that the connexion between the Variations and the Theme is often of the slightest texture; further, through and over the whole set another and larger theme ‘goes’, but is not played…So the principal Theme never appears, even as in some later dramas – e.g., Maeterlinck’s ‘L’Intruse’ and ‘Les sept Princesses’ – the chief character is never on the stage.

The British romantic composer Edward Elgar composed the Enigma Variations in 1898-99. That extraordinary work catapulted him from provincial obscurity to international acclaim, transforming his career from an itinerant music teacher to a celebrated composer. The original title on the autograph score is “Variations for orchestra.” The somber theme is labeled “Enigma,” hence the work is popularly referred to as the Enigma Variations. Elgar explained the Theme is called “Enigma” because it is a counterpoint to a famous melody that is not heard but can play “through and over” the Variations. This absent tune is the melodic cornerstone of the work.  The identity of that elusive melody fuels an ongoing debate as scholars and laypersons refuse to coalesce around any particular solution.

Some argue there is no answer at all by insinuating Elgar concocted the notion of an absent principal Theme as an afterthought, practical joke, or marketing ploy. Others take Elgar at his word and accept the challenge that there is a famous melody lurking behind the Variations’ contrapuntal and modal facade. Regardless of what side is taken in this dispute, conventional scholarship insists the solution can never be known because Elgar took his secret to the grave in February 1934. They assert Elgar never wrote down the answer for posterity to discover. However, such an intractable skepticism minimizes or completely overlooks Elgar’s expertise in cryptography. A compulsion for coding and decoding secret messages is a reigning pillar of his psychological profile. Elgar’s obsession with that esoteric art merits an entire chapter in Craig P. Bauer’s treatise Unsolved! That incontestable fact raises the possibility that Elgar enciphered the answer in the Enigma Variations.

A decade of trawling the Enigma Variations has netted over one hundred cryptograms in diverse formats. These ciphers encode a set of mutually consistent and complementary solutions. Although that figure may appear excessive, it is entirely consistent with Elgar’s obsession with ciphers. More significantly, they provide definitive answers to the core questions posed by the Enigma Variations. What is the missing principal Theme? Answer: Ein feste Burg (A Mighty Fortress) by Martin Luther. What is the “dark saying” in the Enigma Theme? Answer: A musical Polybius box cipher embedded in its inaugural six bars. Who is the secret friend and inspiration behind Variation XIII? Answer: Jesus Christ, the Savior of Elgar’s Roman Catholic faith. The cryptographic evidence authenticating these discoveries is extensive, diverse, and formidable. These discoveries reveal that the Enigma Variations is a symphonic homage to cryptography.

The title page of the Enigma Variations possesses a unique feature not found on any other autograph score by Elgar. On the lower lefthand corner of the title page, he penned a tilted square with the dates and location of the orchestration. 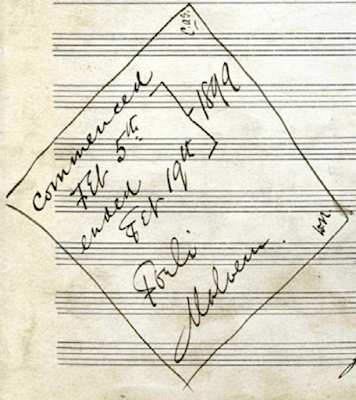 He used “FEb” as an abbreviation of  February to designate the start and end dates of the orchestration.  The second letter in “FEb” is incorrectly capitalized, intimating that it is the first letter in a title. Remarkably, the abbreviation “FEb” is an anagram of the initials for Ein feste Burg. The two Es in “FEb” present a coded version of Elgar’s initials (EE). Ten of the fifteen titles in the Variations consist of initials, so it is contextually appropriate to find the initials of the covert principal Theme on the title page, albeit in an anagrammatized format.

Finding the hidden melody’s initials on the cover of the autograph score enhances the prospect that Elgar may have also enciphered the initial of its composer (Luther). The dates and location of the orchestration are enclosed by a tilted box with a slight opening in the lefthand corner. Due to this gap, the box may be envisioned as two large capital Ls, one facing upright and forward and the other oriented upside down and backward. This is not the only coded form of the initial “L” in that unique area of the score. There is a long square bracket to the right of the start and end dates with a small notch in the middle and a short line pointing to the year 1899. This square bracket also appears to be constructed from two capital Ls separated by a small notch. The uppermost L is upside down and backward, and the lower L is upright but facing backward. These backward-facing Ls subtly hint at Elgar’s contrapuntal mapping of Ein feste Burg in retrograde above the Enigma Theme. In this squared-off area of the cover page, there are two coded forms of “EFB” and two more of the capital letter “L” that stealthily convey the initials of Luther’s Ein feste Burg.

The squared-off region on the title page openly conceals the initials for Luther and his most famous hymn. Remarkably, it is feasible to assemble the remaining letters of Luther from other elements in the bracketed area of this square. Immediately to the left of the square bracket is th, the third and fourth letters in Luther. The th after 19 closely resembles u, the second letter in Luther. The L-bracket, th from “5th”, and u glyph from “19th” furnish the first four letters in Luther. The numbers 5, 18, and 19 appear next to the double-L bracket. The application of a number-to-letter key (1 = A, 2 = B, 3 = C, etc.) to those figures generates E, R, and S. The E and R complete the spelling of Luther, and the S permits the possessive form as “Luther’s.” This outcome is fitting as the covert principal Theme is Luther’s Ein feste Burg. The decryption is constructed exclusively from the square bracket and features immediately to its right and left. 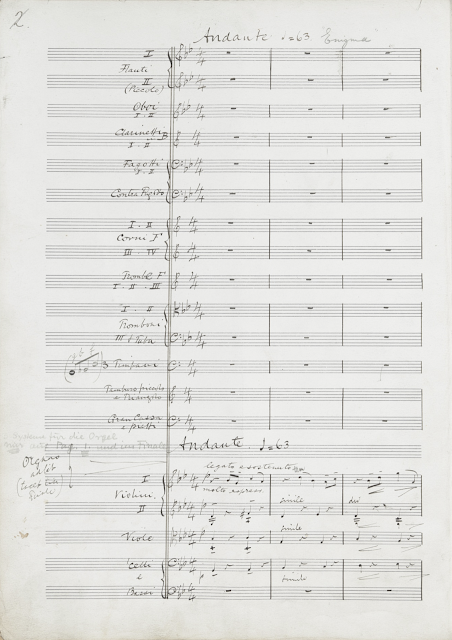 What makes the position and shape of this square cipher containing a square bracket so extraordinary is that the Enigma Theme also contains a “square” cipher called a Polybius square. Elgar carefully studied that encipherment technique in an 1896 article by John Holt Schooling in The Pall Mall Magazine. This sophisticated cryptogram encodes the complete 24-letter German title of Luther’s hymn. Ultimately, the presence of one square cipher on the cover hints at another on the next page of the autograph score. No other autograph score by Elgar displays such an unusual square on its cover, and now the explanation is manifest. Contrary to the claims of experts, Elgar did indeed write down the melodic solution to the Enigma Variations by constructing an elaborate musical Polybius cipher in the opening six bars of the Enigma Theme. This ensured its survival, eventual discovery, and decryption. Such an outcome accounts for Elgar’s cryptic language in the original 1899 program note, “The Enigma I will not explain — it’s ‘dark saying’ must be left unguessed…” A decryption cannot be guessed but must be methodically worked out. To learn more concerning the innermost secrets of the Enigma Variations, read my free eBook Elgar’s Enigmas Exposed.

Posted by Robert Padgett at 7:30 AM