Another Piece Of Elgar's Retrograde Puzzle 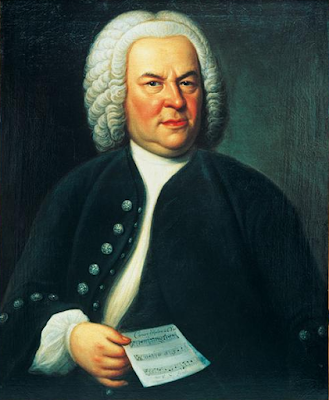 Your course as a candidate was perfectly clear. You took your canto fermo and on it built several species, and several cunning mixtures of species, of strict counterpoint. You took your fugal theme, and having to treat it tonally or otherwise, a vital point, you wrote your exposition, your episodes, your stretto and your pedal, by no means forgetting your augmentation and your diminution, and particularly remembering that while consecutive fifths meant relegation to the darkest depths of Tartarus, no university professor could resist the magic of a canon cancrizans, say in the Hypomixolydian mode.

The British composer Edward Elgar composed his orchestral Enigma Variations in 1898-99. That masterpiece transformed his reputation from a provincial itinerant music teacher to a world-class composer.  The Enigma Variations is a riddle in three parts consisting of:

Elgar advised the Enigma Theme is a counterpoint to a famous melody that is not heard yet plays “through and over” the set of Variations. The search for that absent tune spawned a speculative frenzy that continues unabated to this day. No purported melodic solution has ever gained widespread acceptance because scholars claim Elgar took his secret to the grave in February 1934. Even if the correct tune was proposed, the conventional wisdom insists there is no viable way to authenticate it.

Musicologists presume Elgar never wrote down the answer for posterity to discover. That presumption fails to take into account his lifelong obsession for cryptography. Elgar’s fascination for ciphers merits an entire chapter in Craig P. Bauer’s treatise Unsolved!  The bulk of its third chapter is devoted to Elgar’s meticulous decryption of an allegedly insoluble Nihilist cipher presented by John Holt Schooling in the April 1896 issue of The Pall Mall Magazine. That particular cryptogram is a derivative of the Polybius square. Elgar was so delighted with his solution to Schooling’s reputedly impenetrable code that he brags about cracking it in his first biography published in 1905. Those inclined to downplay Elgar’s expertise in cryptography are urged to consult the third chapter of Bauer’s book.

The recognition of Elgar’s cryptographic expertise raises the prospect that he encoded the solutions to the Enigma Variations within the score. A decade of concerted analysis has netted over ninety cryptograms in diverse formats. These ciphers encode a narrow set of mutually consistent and complementary solutions that provide definitive answers to its core riddles. What is the secret melody to which the Enigma Theme is a counterpoint and serves as the foundation of the ensuing movements? Answer: Ein feste Burg (A Mighty Fortress) by Martin Luther. What is Elgar’s “dark saying” ensconced within the Enigma Theme? Answer: A musical Polybius box cipher embedded in the opening six bars. Who is the secret friend and inspiration behind Variation XIII? Answer: Jesus Christ, the Savior of Elgar’s Roman Catholic faith and subject of his first sacred oratorio, The Light of Life (Lux Christi).

The Enigma Variations embody a fusion of Elgar’s twin loves for counterpoint and cryptography. A stark gulf between these two disciplines prevents experts in those respective fields from uncovering and authenticating the answers. On the one hand, musicologists lack the expertise to plumb the depths of Elgar’s cryptographic genius. Their inability to detect and decrypt ciphers is routinely misattributed as proof against their existence. On the other hand, cryptographers are commonly recruited from the ranks of mathematicians and computer scientists with little or no background in music composition or counterpoint. Bridging the divide between these two divergent specialties demands an intimate familiarity with counterpoint and cryptography.

Scholars routinely argue that Elgar provided little or no guidance regarding the nature of his contrapuntal puzzle. On the contrary, he publicly challenged the world to decrypt his melodic cipher by offering a series of detailed clues. These criteria appear in four primary sources:

The public record provides six precise conditions about the relationship between the Enigma Variations and the covert principal Theme. These specific clues are summarized below:

Elgar never elaborated on the exact nature of the counterpoint between the Enigma Theme and its secretive source melody. Virtually every proposed tune begins its contrapuntal mapping by overlaying the opening of both melodies. This reflexive approach fails to appreciate the possibilities afforded by contrapuntal techniques. Counterpoint offers some ingenious methods for manipulating a melody. Composers during the late Romantic period routinely modified melodic subjects using the standard contrapuntal techniques of stretto, augmentation, diminution, inversion, contrapuntal motion, and retrograde. According to Kent Kennan, the author of the textbook Counterpoint, the most rarified form is retrograde motion in which a melody is played in reverse from back to front. He explains:

Retrograde motion (cancrizans) is rare in tonal music. Not only is it difficult to write, but the average ear has trouble recognizing a melodic line when it is played backwards; consequently the point of the device tends to be lost.

Playing the covert Theme in reverse as a retrograde counterpoint sounds like the most effective tactic for camouflaging a melody.  The word cancrizans is medieval Latin for crab, a crustacean noted for its unusual ability to walk backward. For this reason, a retrograde counterpoint is also known as a crab counterpoint. In Variation XIII, Elgar repeatedly cites a melodic fragment of a subordinate theme from Felix Mendelsohn’s concert overture Calm Sea and Prosperous Voyage. The ostinato figure accompanying those melodic fragments reprises the Enigma Theme’s palindromic rhythm, providing a discernible link between these two ostensibly unrelated melodies. The Mendelssohn fragments sonically portray a calm sea, an environment inhabited by crabs. By conveying a marine atmosphere tied to the Enigma Theme’s distinctive rhythm, Elgar cleverly hints at a retrograde counterpoint.

Multiple lines of evidence point to such an unexpected backward counterpoint. For example, the ABA’C structure of the Enigma Theme is a phonetic spelling of aback, a word that means “backward” and “by surprise.” A retrograde counterpoint satisfies both of those definitions. Phonetic spellings are an idiosyncrasy of Elgar’s personal correspondence. The first six notes of the Enigma Theme’s bass line replicate in reverse order the last six notes of the ending phrase from Ein feste Burg. The discrete note letters of the Mendelssohn quotation in A-flat major (C, B-flat, and A-flat) provide three of the four letters in crab. Only the “R” is absent as the musical alphabet is restricted to the first seven letters. The Mendelssohn fragments encode the initials of Ein feste Burg in reverse order. Confirmation is provided by a retrograde mapping of Ein feste Burg above the Enigma Theme applying such standard techniques as augmentation and diminution.

A new piece of the cryptographic puzzle was recently found that intimates a retrograde mapping of the covert melody above the Enigma Theme. This discovery builds on prior research that determined proximate title letters encode answers to the Enigma Variations. Elgar’s sketches document five differing orderings of the movement, a process carried out to construct these varied cryptograms. The earliest example is the Letters Cluster Cipher that enciphers the initials of Ein feste Burg in the immediate vicinity of Variation XIII (***). A more recent revelation is how Elgar encodes the title of Ein feste Burg by proximate title letters in the Enigma Theme, Variations I-III, and XII-XIV. The latest discovery consists of adjacent title letters in Variations I, II, and III.  As shown below, nearby letters produce anagrams of CRAB, STEP, and HID. 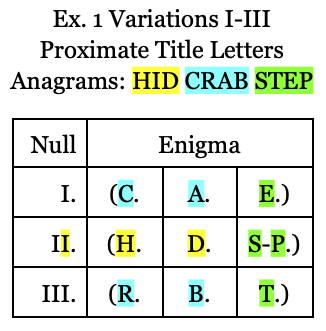 These two decryptions implicate a crab counterpoint within the Enigma Theme. This latest cryptographic discovery bolsters the conclusion that Elgar deliberately concealed the covert Theme by disguising it as a retrograde counterpoint. To learn more concerning the secrets of the Enigma Variations, read my free eBook Elgar’s Enigmas Exposed.

Posted by Robert Padgett at 8:31 AM