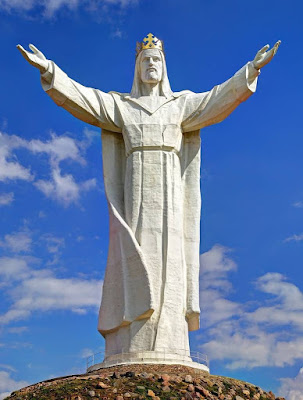 From the Catholic Litany of the Holy Name of Jesus

The British Romantic composer Edward Elgar was obsessed with cryptography, the discipline of coding and decoding secret messages. His interest in that esoteric art merits an entire chapter in Craig P. Bauer’s treatise Unsolved!  Much of the third chapter is devoted to Elgar’s brilliant decryption of an allegedly insoluble Nihilist cipher presented by John Holt Schooling in the April 1896 issue of The Pall Mall Magazine. A Nihilist cipher is a derivative of the Polybius square. Elgar was so delighted with his solution to Schooling’s reputedly impenetrable code that he brags about it in his first biography published in 1905 by Robert J. Buckley. Elgar painted his decryption in black paint on a wooden box, an appropriate symbol as another name for the Polybius square is a box cipher. Elgar’s detailed decryption of the six-word solution — “He who fears is half dead” — is summarized on a set of nine index cards.

A decade of concerted analysis of the symphonic Enigma Variations has netted over ninety cryptograms in diverse formats. These ciphers encode a set of mutually consistent and complementary solutions that furnish definitive answers to the core questions posed by the Enigma Variations. What is the secret melody to which the Enigma Theme is a counterpoint and serves as the foundation of the ensuing movements? Answer: Ein feste Burg (A Mighty Fortress) by Martin Luther. What is Elgar’s “dark saying” nestled within the Enigma Theme? Answer: A musical Polybius box cipher embedded in the opening six bars. Who is the secret friend and inspiration behind Variation XIII? Answer: Jesus Christ, the Savior of Elgar’s Roman Catholic faith and subject of his first sacred oratorio, The Light of Life (Lux Christi).

Variation XIII is undoubtedly the most unconventional of the movements from the  Enigma Variations. Its title of three mysterious asterisks enclosed by parentheses is followed by the subtitle Romanza. This movement harbors no discernable melodic connection to the Enigma Theme, prompting Francis Donald Tovey to classify it as a “free episode...the most romantic thing in the world.” Instead, it features four melodic incipits of a subordinate theme from the concert overture Calm Sea and Prosperous Voyage (Meeresstille und glückliche Fahrt) by Felix Mendelssohn. This sea change represents a significant departure from all of the other movements. An influential early Romantic composer of the German School, Mendelssohn generated renewed interest in Bach’s music with a performance of the St. Matthew Passion in 1829. He also founded the Leipzig Conservatory in 1843. Elgar desperately wanted to attend that prestigious institution but lacked the funds to pursue his dream.

As I scrutinized Variation XIII, I stumbled on an elementary acrostic cipher embedded within its cryptic title. It is embarrassing to admit that it eluded my notice until now. The title page of Variation XIII from the published orchestral score appears below: 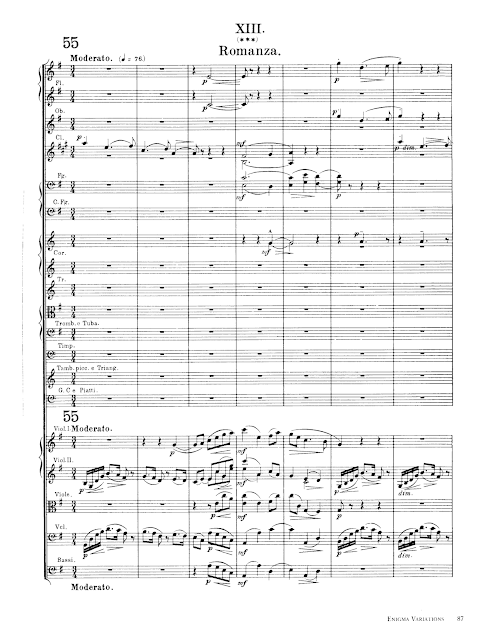 The title consists of the following three elements:

It was previously determined that the Roman numerals are an elementary number-to-letter cipher that encodes the initials for Elgar's secret friend. X is the number ten, and the tenth letter of the alphabet is J. III stands for three, and the third letter is C. Consequently, the Roman numerals XIII is a coded version of the initials for Jesus Christ. That is an unsurprising decryption for a Roman Catholic who composed such sacred oratorios as The Light of Life (Lux Christi) and The Dream of Gerontius. Elgar employed the same technique with Variation IX to encipher the initials for August Jaeger, his friend at Novello whom he adroitly nicknamed Nimrod.

As the Roman numerals XIII encode the initials for Elgar's not-so-secret friend, what could be the meaning of the three cryptic asterisks? Those missing letters are cleverly encoded by the first initials of the titles from the adjoining movements. The first initials from the titles of Variations XII (B) and XIV (E, and F) are an acrostic anagram of the initials for the covert Theme (Ein feste Burg). Elgar deftly frames the question posed by the three asterisks with the answer hidden in plain view. This acrostic anagram ensconced within the titles of Variations XII and XIV is an elementary cryptogram dubbed the Letters Cluster Cipher. The figures 12 and 14 are interesting because their corresponding first and second digits may be paired off to form the numbers 11 and 24. There are 11 discrete letters and a total of 24 letters in the covert Theme’s complete six-word title, Ein feste Burg ist unser Gott. 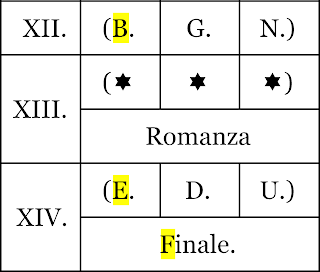 Elgar experimented with five different orderings of the movements for the Variations, something that in retrospect was done to construct this ingenious cipher. Such a possibility eludes scholars like Julian Rushton who irrationally speculate that Elgar lacked the time to construct any cryptograms. Elgar began openly composing the Enigma Variations in earnest on October 21, 1898. He completed the orchestration on February 19, 1899. This process consumed 121 days, a period that afforded more than enough time and opportunity for Elgar to indulge his passion for cryptography. 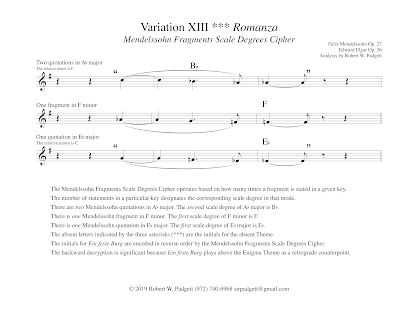 Now reconsider the three-part title from Variation XIII with the absent letters denoted by the asterisks filled in. Their first letters are a reverse acrostic of REX, the Latin word for king. That same word — REX  — is also enciphered by proximate title letters in Variations XIII and XIV. Elgar was very familiar with the Latin language. Between 1863 and 1872, he was educated at three different Roman Catholic schools where he received instruction in Latin and regularly attended the Latin Mass.

Just as the initials EFB are enciphered in reverse order by the Mendelssohn fragments, so too are the letters for REX as an acrostic by the three-part title. This consistency is supportive of a deliberate design. The sum of characters in the Roman numerals is five including the period. The same holds true for the second title element with three asterisks enclosed by two parentheses. These two title elements with five characters each suggest a coded version of Elgar’s initials because the fifth letter of the alphabet is E. Elgar routinely initialed his correspondence “EE” in place of his name. A discrete subset of cryptograms within the Variation bears his duplicate initials. One example is an acrostic anagram formed by the seven performance directions in the Enigma Theme’s opening measure that enciphers “EE’s Psalm.” There are 46 characters in those performance directions that implicate Psalm 46, the chapter that supplies the title for Luther’s greatest hymn. 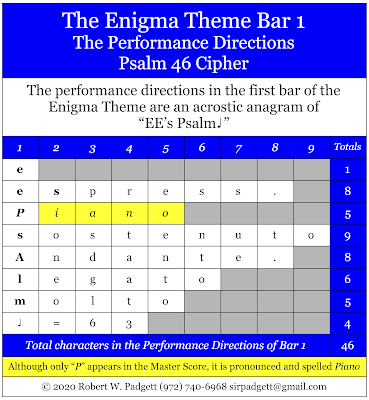 A sign was displayed at the crucifixion of Jesus to advertise his capital offense or Titulus Crucis. It was written in three languages: Hebrew, Latin, and Greek. The Latin version “IESVS NAZARENVS REX IVDÆORVM” translates into English as “Jesus the Nazarene King of the Jews.” REX is the third word on Jesus' death warrant. One of his many biblical titles is “King of Kings.” At his crucifixion, Jesus wore a crown of thorns. The identity of his barbaric executioners is blatantly announced by the subtitle Romanza with its first two syllables pronounced like “Romans.” Goethe's “deathly stillness” (Todesstille), poetically symbolized by a calm sea and sonically depicted by the Mendelssohn fragments, alludes to the death of Elgar's special friend. There is  a symbolic oceanic connection to the crucifixion of Christ who likened his death and resurrection to the Sign of Jonah, a prophet who spent three days and nights in the belly of a “great fish.” The Roman numerals for Christ’s movement conveniently furnish the cross (X) and three nails (III), prominent hallmarks of the Jesuit Christogram. Elgar wrote the initials (A.M.D.G.) of the Jesuit motto “Ad majórem Dei glóriam” as a dedication for his major oratorios such as The Dream of Gerontius, The Apostles, and The Kingdom. 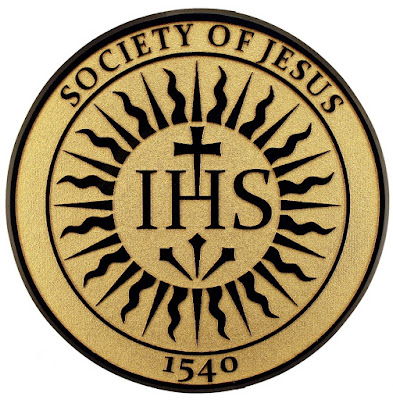 Other cryptograms implicate the death of Jesus in Variation XIII such as the Dead G-D Cipher. Symbolically buried in the lowest staff of the full score in Variation XIII, the bass section plays the notes D-E-A-D four measures after Rehearsal 55 and a second time four bars after Rehearsal 59. Incredibly, the bass part literally spells out what Elgar symbolically portrays with the conspicuous Mendelssohn fragments. Variation XIII is framed in the key of G major. The discrete notes in Elgar’s spelling of “dead” are D, E, and A. In the key of G major, the scale degrees of D, E, and A are 5, 6, and 2, respectively. When those three scale degrees are converted into their corresponding letters in the alphabet using a simple number-to-letter key, they become E, F, and B. The initials of the secret melody are encoded in order by the DEAD Notes Scale Degrees Cipher. Those letters are the initials in order for the covert Theme, Ein feste Burg. The name of Elgar’s special friend who died and rose from the grave is cited in the second stanza of Luther’s renowned hymn about Him. 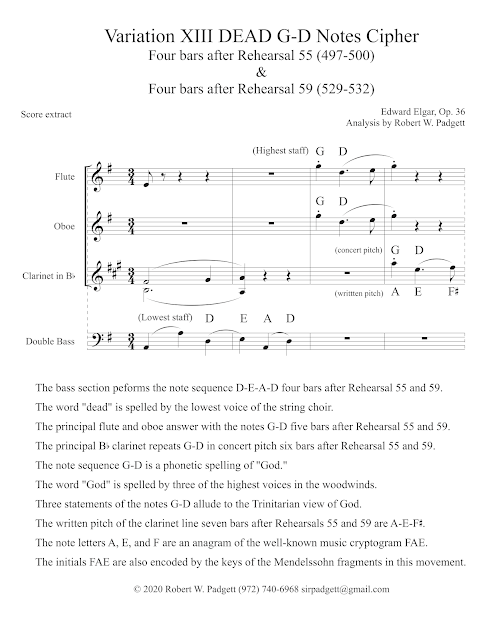 On the heels of each spelling of “dead” in the bass line, the identity of who died is answered by the flute, oboe, and clarinet. Six bars after Rehearsal 55, the principal flute and principal oboe play in unison a G followed by D. Seven bars after Rehearsal 55, the principal clarinet repeats that same melodic sequence for a third time. This same pattern is reiterated six and seven bars after Rehearsal 59. Elgar’s answer to the question of who died is G-D, a common phonetic spelling of God. Three melodic note sequences of G-D intimate the Trinity with two overlapping to suggest God the Father and his earthly incarnation, God the Son. Elgar’s Roman Catholic faith leaves only one credible candidate for a God who died: Jesus Christ. Elgar raises a question by encoding the word DEAD in the lowest part of the score and then answers it in the three highest staves with three codes references to G-D. The use of three different woodwinds to spell out a phonetic rendition of “God” in the top three staves of the score is a transparent Trinitarian allusion.

The overt and covert titles of Variation XIII are a reverse acrostic spelling of REX, the Latin word for King. That is the third Latin word on the sign displayed at the crucifixion of Christ, the friend commemorated in that movement. One of his unique scriptural titles is “King of Kings.”  Other ciphers in Variation XIII encode the initials of the covert Theme, Ein feste Burg. The reverse decryption of Mendelssohn Fragments Scale Degrees Cipher as “BFE” alludes to a retrograde counterpoint of the clandestineTheme over the Enigma Theme. The scale degrees of the unique notes in the DEAD Notes Cipher also encipher the initials for the covert Theme in order as “EFB.” These decryptions of diverse but mutually consistent cryptograms within Variation XIII are dead right. To learn more about the secrets of the Enigma Variations, read my free eBook Elgar’s Enigmas Exposed.

Posted by Robert Padgett at 6:19 AM