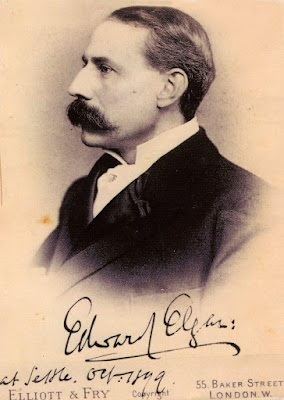 So the last will be first, and the first last.

The British romantic composer Edward Elgar was an expert in cryptography, the discipline of coding and decoding secret messages. His obsession with that esoteric art merits an entire chapter in Craig P. Bauer’s treatise Unsolved! Much of its third chapter is devoted to Elgar’s brilliant decryption of an allegedly insoluble Nihilist cipher presented by John Holt Schooling in the April 1896 issue of The Pall Mall Gazette.  Elgar was so delighted with his solution to Schooling’s reputedly insoluble cipher that he mentions it in his first biography published in 1905 by Robert J. Buckley. Elgar painted his decryption in black paint on a wooden box, an appropriate symbol as another name for the Polybius checkerboard is a box cipher. The six-word solution — “He who fears is half dead” — is summarized on a set of nine index cards.

On the sixth card, Elgar relates the task of cracking the cipher to “...working (in the dark).” The phrase “in the dark” is enclosed by parentheses, a feature associated with all of the titles from the Enigma Variations except the enigmatic Theme. His use of the word “dark” as a synonym for a cipher is significant because Elgar employs that same phraseology in the original 1899 program note to characterize the Enigma Theme. It is an oft-cited passage that merits revisiting as Elgar lays the groundwork for his tripartite riddle:

The Enigma I will not explain – it’s ‘dark saying’ must be left unguessed, and I warn you that the connexion between the Variations and the Theme is often of the slightest texture; further, through and over the whole set another and larger theme ‘goes’, but is not played…So the principal Theme never appears, even as in some later dramas – e.g., Maeterlinck’s ‘L’Intruse’ and ‘Les sept Princesses’ – the chief character is never on the stage.

A decade of concerted analysis of the Enigma Variations has netted over eighty cryptograms in diverse formats that encode a set of mutually consistent and complementary solutions. While this figure may seem incredible, it is entirely consistent with Elgar’s obsession with ciphers. More significantly, their solutions provide definitive answers to the core questions posed by the Enigma Variations. What is the secret melody to which the Enigma Theme is a counterpoint and serves as the foundation of the ensuing movements? Answer: Ein feste Burg (A Mighty Fortress) by Martin Luther. What is Elgar’s “dark saying” ensconced within the Enigma Theme? Answer: A Music Polybius Box Cipher embedded in the opening six bars. Who is the secret friend and inspiration behind Variation XIII? Answer: Jesus Christ, the Savior of Elgar’s Roman Catholic faith.

The most sophisticated cryptogram ensconced within the opening six measures of the Enigma Theme is a Music Polybius Box Cipher. As his personal library and first biography amply attest, Elgar studied the Polybius box cipher years before he composed the Enigma Variations. Some striking parallels between the melody and the secret tune’s title implicated the presence of this cipher. There are 24 melody notes in bars 1-6, and likewise, there are 24 letters in the covert Theme’s six-word German title. Over these opening six bars, there are six discrete note letters in both the melody and bass lines. Elgar’s Polybius Box Key consists of six columns and six rows that contain 36 cells, a figure that corresponds to the opus number of the Enigma Variations.  Plaintext letters from the covert Theme’s title were placed in specific cells within the checkerboard grid. Melody notes are assigned to columns and bass notes to the rows. With this key, a pair of melody and bass notes cleverly designates the intersection of the corresponding column and row, pinpointing a given solution letter.

Elgar reshuffled the letters from six-word German title to construct an elaborate anagram of short words and phrases in English, Latin, and what he reasonably believed to be Aramaic based on popular biblical commentaries. This is his “dark saying” in the Enigma that is first mentioned in the 1899 program note. Many of the words revealed by the decryption are rendered phonetically, a trademark of Elgar’s writing style as evinced by his personal correspondence. The first letters in the four languages found in the full decryption are an acrostic anagram of ELGAR: English, Latin, German, and Aramaic. The decryption must be authentic because Elgar’s last name is enciphered by a second encryption layer. Elgar uses this method of encipherment more than once because the first letters of the performance directions in bar 1 of the Enigma Theme are an acrostic anagram of “EE’s Psalm,” a cryptogram known as the Enigma Psalm Cipher.

Elgar’s last name is encoded as an acrostic anagram of the languages revealed by the decryption of his Music Box Cipher. This cryptogram is located in the opening six bars of the Enigma Theme. The same pattern is reprised at the end of the Enigma Theme where his first name is also encoded. This cipher is constructed from the two types of double barlines that frame the Enigma Theme’s bridge passage in bars 18-19. There is an end bar at the beginning of bar 18 and a double bar at the end of bar 19. The first letters of these barlines (End and Double) is an acrostic anagram of “Ed,” a shortened version of Edward. 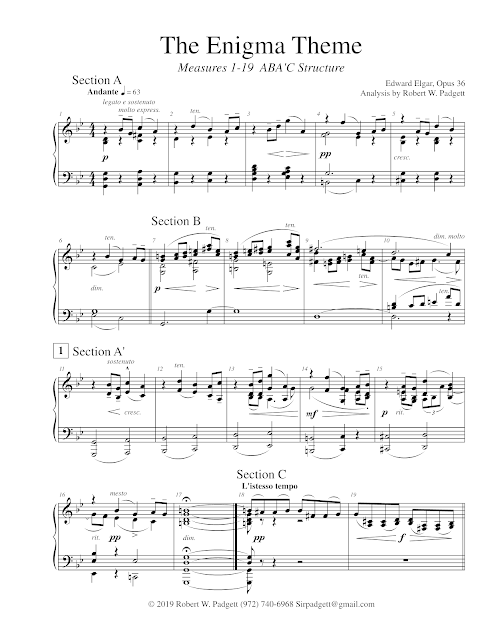 It has been shown how Elgar’s last name is encoded at the beginning of the Enigma Theme, and his first name at its end. By bookending the Enigma Theme with a coded version of his signature, Elgar stealthily delineates the full length of his melody. The transposition of his first and last names within the Enigma Theme further imply the covert Theme’s ending phrase is also at the beginning, and its starting phrase at its end.  The Enigma Theme’s ABA’C structure deftly alludes to such a retrograde counterpoint because those letters are a phonetic spelling of aback, a word that means “backward” and “by surprise.” A contrapuntal mapping of Ein feste Burg backward “through and over” the Enigma Theme affirms the efficacy of this approach. The perplexing title Elgar gave to his baffling melody is exquisitely appropriate because the definition of “enigma” is “something hard to understand or explain.” A retrograde counterpoint is an enigma since the hidden melody is played in reverse, rendering it far more difficult to detect and recognize. To learn more concerning the secrets of the Enigma Variations, read my free eBook Elgar’s Enigmas Exposed.