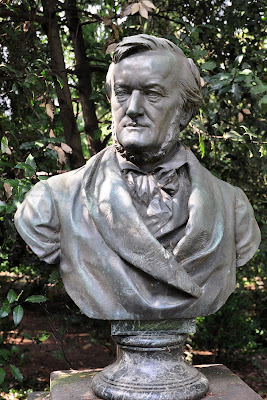 My Father, Lord of heaven and earth, I am grateful that you hid all this from wise and educated people and showed it to ordinary people. Yes, Father, that is what pleased you.
Jesus praying in Mathew 11:25-26
The German composer Richard Wagner (1813-1883) exerted a profound and lasting impact on the English composer Edward Elgar (1857-1934). So undeniable is this fact that Barry Millington, the Editor of The Wagner Journal, writes that Wagner’s “...influence on the harmonic language of composers such as Parry, Stanford and Elgar is self-evident.” From 1877 through 1902, Elgar attentively studied Wagner’s orchestration, innovative harmonic language, and system of Leitmotifs. During these 25 years, Elgar regularly heard Wagner’s music in London at concerts conducted by Hans Richter and August Manns. He also made numerous trips to Germany to bask in the mythical romanticism of Wagner’s operas. These protracted efforts culminated in 1900 with The Dream of Gerontius, a numinous homage to Wagner’s final opera Parsifal.
Wagner's influence on Elgar's music is a fertile field of research and scholarship. In his groundbreaking 1985 paper Elgar and Wagner, Peter Dennison unmasks and documents Leitmotifs from Wagner’s operas in Elgar’s early choral works. Dennison reasons that a careful study of Wagner's music permeated Elgar’s compositions. Consistent with this pattern, Elgar adapted Wagnerian Leitmotifs in Chanson de Nuit, a solo violin piece with piano accompaniment composed in 1889-90. In 2008, Laura Meadows picked up where Dennison left off in her exhaustive thesis Elgar as Post-Wagnerian: A Study of Elgar’s Assimilation of Wagner’s Music and Methodology. Meadows lays out a compelling case that Elgar was “profoundly influenced by Wagner from an early age and this influence gradually infiltrated his compositional thoughts.” She traces this process through Elgar’s large-scale choral and orchestral compositions through 1899.
Ian Beresford Gleaves ventures further down this path in his article Elgar and Wagner published in the July 2007 issue of The Elgar Society Journal. He observes that Wagner’s enduring impact on Elgar extended to his orchestration of the Enigma Variations which “assimilates many of Wagner’s methods, particularly as regards the tutti.” He also draws attention to a Wagnerian modulation in bars 30-31 of Variation I that recalls bars 16-17 of the Prelude to Act I of Tristan. Although not recognized until now, Elgar further emulates Wagner’s methods in his treatment of the melodic quotations from Mendelssohn’s overture Meeresstille und glückliche Fahrt (Calm Sea and Prosperous Voyage) in Variation XIII. Only one work by Wagner incorporates melodic fragments by another composer—the Kaisermarsch (Imperial March) composed in 1871. 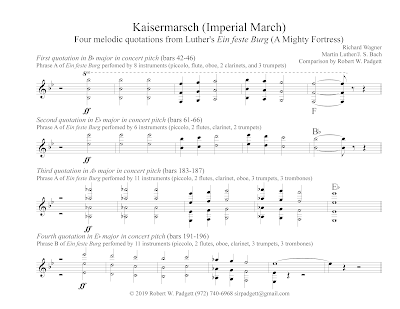 There are some extraordinary parallels between Wagner's quotations of Martin Luther's hymn Ein feste Burg (A Mighty Fortress) in the Kaisermarsch and Elgar's Mendelssohn quotations in Variation XIII. The impetus for comparing these two sets of melodic quotations emerged from two factors. As previously outlined, the first is that Elgar was deeply influenced by an intensive study of Wagner’s music from 1876 through 1902. The second is that the covert Theme to the Enigma Variations is Ein feste Burg, the renowned battle hymn of the Protestant Reformation composed by a heretic excommunicated by Pope Leo X. This melodic solution readily explains why Elgar, a practicing Roman Catholic, adamantly refused to disclose the melodic lynchpin to his Enigma Variations. 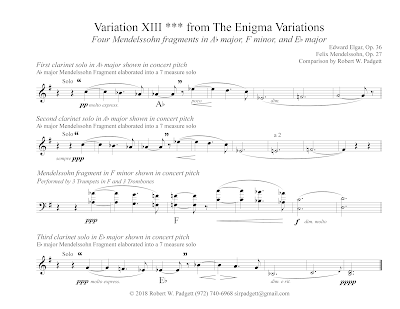 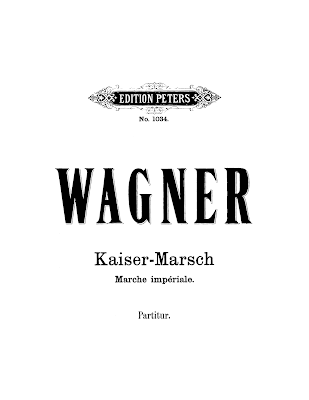 There are some interesting points of correspondence between the Enigma Theme and Kaisermarsch. Both are set in common time (4/4) and have two flats in the key signature with Kaisermarsch in B-flat major, and the Enigma Theme in the relative key of G minor. Wagner employs the G minor chord as the harmony for the first note of the opening Ein feste Burg quotation in bar 42.  There are other similarities between the Kaisermarsch and the Enigma Variations. For instance, a series of descending melodic fourths beginning at 234 of the Kaisermarsch are virtually identical to the falling melodic fourths at the outset of Variation XIII that is repeated several times throughout the movement. 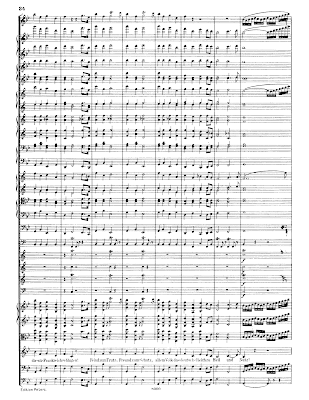 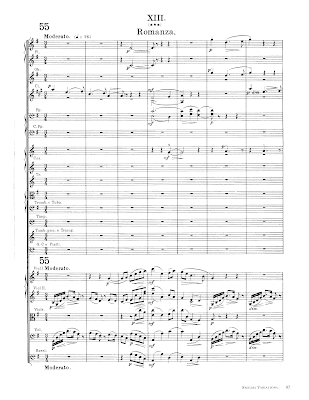 Wagner’s Kaisermarsch was exceedingly popular from 1877 through 1911 before the conflagration of World War I rendered all things German strictly verboten. On May 7, 1877, Wagner conducted Kaisermarsch at a rehearsal in the Royal Albert Hall. Hubert Parry attended the event and recorded this reaction in his diary:
All the morning at the rehearsal at the Albert Hall. Wagner conducting is quite marvellous; he seems to transform all he touches, he knows precisely what he wants and does it to a certainty. The Kaisermarsch became quite new under his influence and supremely magnificent. I was so wild with excitement after it that I did not recover all the afternoon. The concert in the evening was very successful and the Meister was received with prolonged applause but many people found the Rheingold selection too hard for them.
Elgar heard numerous performances of Wagner’s Kaisermarsch in the years leading up to the genesis of the Enigma Variations. As documented in Christopher Fifield’s thoroughly researched and endlessly fascinating biography, Hans Richter conducted no less than fifteen performances of Kaisermarch at Richter Concerts in London between 1879 and 1897. The dates of those performances are listed below:


Elgar likely attended most if not all of these performances in his quest to hear Wagner’s music. Richter’s towering influence assured that the Kaisermarsch would be programmed by other orchestras throughout England during that era. The August 1, 1889 issue of The Monthly Musical Record contains a glowing review of a June 24 Richter Concert in London that was capped off by the Kaisermarsch:

The “Kaisermarsch” — that grand page of brilliant orchestral writing to celebrate a grand page in German history — again produced its overpowering effect at the conclusion of one of the finest concerts of the season.
That article also mentions the premiere of Hubert Parry’s Symphony No. 4 in E minor dedicated to Hans Richter. It describes “the diffuse finale” of that work with “its marked reminisces from…‘Kaisermarsch’...” Elgar attended that premiere after only recently settling in Kensington with his wife following their marriage in May 1889. Elgar gleaned insight and knowledge from Parry’s contributions to Grove’s Dictionary of Music and Musicians, performed his music as a sectional violinist, and publicly acknowledged Parry as “the head of our art in this country.” As evidence of his respect towards Parry, Elgar orchestrated his Jerusalem which is now a mainstay at the Last Night of the Proms.
Elgar’s handling of the Mendelssohn fragments in Variation XIII proves to be a stealth homage to Wagner’s treatment of Ein feste Burg in the Kaisermarsch. This analysis identified nine parallels between these two sets of melodic quotations, a sum too high to be ascribed to chance. The cryptographic links are the most intriguing as both series of quotations encode the initials for Ein feste Burg. It may be confidently argued that Elgar’s emulation of Wagner in his handling of the Mendelssohn fragments implicates Ein feste Burg as the covert Theme to the Enigma Variations. The overwhelming evidence for this discovery is contrapuntal, cryptographic, and multivalent as it accounts for a range of anomalies such as the conspicuous insertion of the Mendelssohn quotations. To learn more concerning the secrets of the Enigma Variations, read my free eBook Elgar’s Enigmas Exposed.
Soli Yah Gloria
Posted by Robert Padgett at 7:29 PM