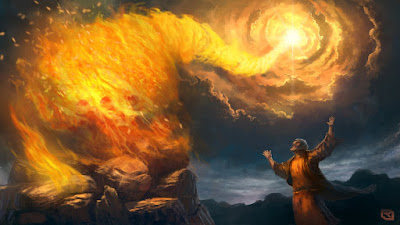 There are four subtitles in the Enigma Variations by Edward Elgar:

When the first and last movements are inverted (i.e., the first becomes last, and the last becomes first), the first letters of those four subtitles form an acrostic of the word FIRE. It is astonishing that Julian Rushton, one of the world’s leading Elgar scholars, failed to detect such a rudimentary cryptogram. Such a lapse would account for why he reflexively ruled out the existence of any ciphers in the Enigma Variations. The supreme irony is the only thing that may be safely ruled out is Rushton’s aptitude for cryptanalysis.

Elgar’s FIRE cipher mirrors another nestled among the seven performance directions of the Enigma Theme’s opening measure because the first letters of those terms are an acrostic for EE’s PSALM. The application of the same method of encipherment for these codes is prima facie evidence that Elgar was behind the creation of both.
There are a number of plausible explanations for why would Elgar encode the word FIRE in the Enigma Variations. The first concerns various coded references to Dante's Divina Commedia within the Enigma Variations. For instance, Variation IX is called Nimrod, a giant mentioned in Dante's Inferno inhabiting the ninth circle of hell.  The Inferno is the first canticle from his epic poem, and that title means a very large and dangerous fire. The word canticle translates as a hymn or psalm, a revealing term since the covert principal Theme to the Enigma Variations is Ein feste Burg, a hymn inspired by Psalm 46. For a devout Roman Catholic like Elgar, his FIRE Cipher could be a covert reference to the fire of Christ, the secret friend portrayed in Variation XIII. As it says in the book of Hebrews, “For our God is a consuming fire.” The I AM Cipher in the Enigma Theme suggests another theological explanation, for when God spoke to Moses from the burning bush, he ascribed to himself the enigmatic title, “I AM.” In Roman Catholic theology Jesus is a Person of the Trinity and is regarded as the Incarnation of God. Multiple coded references to the Turin Shroud are also relevant because that sacred relic was scorched in 1532 when a fire broke out in the chapel where it was stored.
There is another possible explanation for Elgar’s FIRE Cipher. In the original 1899 program note, Elgar remarked the Enigma Theme involved a “dark saying.” Fire serves as a source of light to illuminate the night, so this acrostic cryptogram suggests a cipher key involving some connection to fire. Prior research uncovered a Polybius Square Music Box Cipher in the opening six measures of the Enigma Theme. This secret code enciphers a six-word phrase (i.e., a saying) that comprises the complete title of the covert principal Theme, A Mighty Fortress is Our God, in the original German as Ein feste Burg ist Unser Gott. What is remarkable about the Polybius Square Cipher is it originally involved the use of different combinations of flaming torches to transmit messages over long distances at night. Besides suggesting the identity of his secret friend, Elgar’s coded reference to FIRE may be understood as a clue regarding the type of cipher that encodes his “dark saying.”
Another acrostic ensconced within these four subtitles is the German word frei meaning free:

A meticulous study of the Mendelssohn Fragments in Variation XIII shows their key signatures (A-flat major, F minor, and E-flat major) encode the well-known musical cryptogram F-A-E. These initials originate from Joseph Joachim’s German motto “Frei aber einsam,” which translates into English as “Free but lonely.” When describing the Enigma Theme, Elgar wrote that “it expressed when written (in 1898) my sense of the loneliness of the artist...”  Not only does he encode the first word of Joachim’s romantic motto in the subtitles, Elgar also sequentially added the Italian word for but (ma) followed by a phonetic version of the German word einsam (eanzam) symbolically laid out in the shape of a cross. Elgar’s use of multiple languages and phonetic spellings is a distinctive feature of his Music Box Cipher, a cryptogram to which he affixed his signature as stealth confirmation.

Posted by Robert Padgett at 8:32 PM