The Enigma Variations: Beginnings as Endings 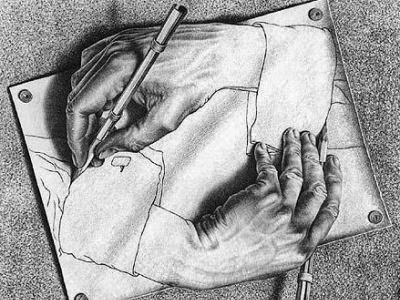 “Great is the art of beginning, but greater the art is of ending.”

Elgar quoting Longfellow at the end of the Enigma Variations

A persistent trait displayed throughout Edward Elgar’s Enigma Variations is the partial or complete restatement of the opening material as a concluding phrase. This is sometimes accomplished while overlaying the opening phrase with some variant of the Enigma Theme’s starting phrase. In all, ten of the Variations restate the beginning phrase in whole or in part as endings: I (C. A. E.), II (H. D. S-P.), III (R. B. T.), V (R. P. A.), VI (Ysobel), VII (Troyte), IX (Nimrod), X (Dorabella), XII (B. G. N.), and XIV (E. D. U.). Absent from this series are IV (W.M.B.), VIII (W. N.), XI (G. R. S.) and XIII (***). In the search for the covert principal theme, it is critically important to recognize Elgar’s repeated restatement of the opening phrase at the conclusion of the majority of the movements. This is the case because Elgar unpredictably starts his counterpoint between the Enigma Theme and the covert principal theme with Ein feste Burg’s final phrase, and unexpectedly concludes it with its starting phrase. From a contrapuntal standpoint, Elgar puts the proverbial cart before the horse.
Variation I (C. A. E.) begins in measure 20 with a rhythmic variation of the Enigma Theme in G minor played by the flute, second violins, and violas. The opening two bars of this rhythmic variant (measures 20-21) are reprised in G major as a tierce de Picardie by the clarinet as the ending phrase (measures 30-40). 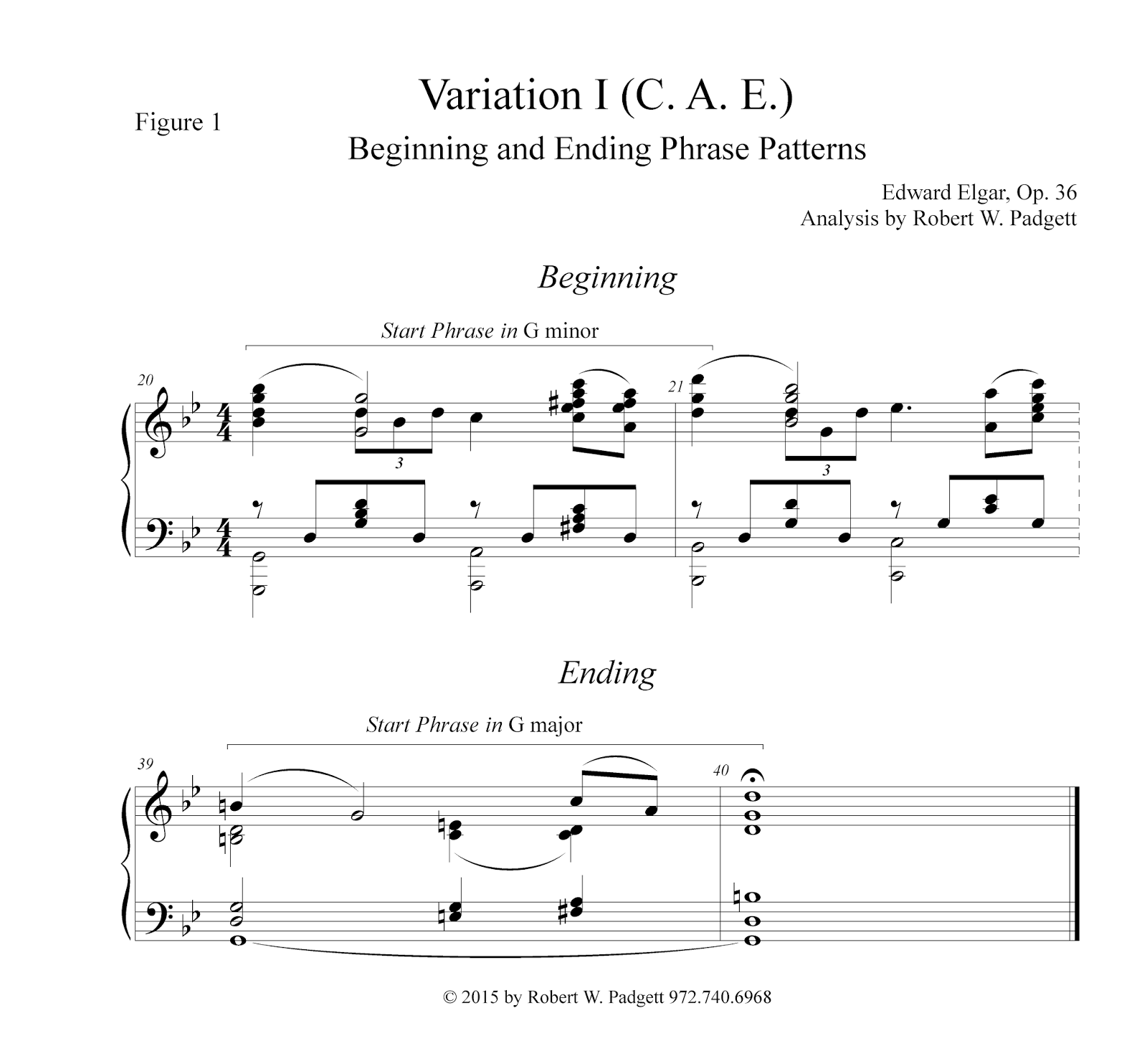 Variation II (H. D. S-P.) commences in measure 41 with a toccata figure stated by the first violins. Four bars from the end in measure 93 the flute repeats this opening figure verbatim from measure 41, continuing over into measure 94 with the first note (C) from measure 42. This is promptly followed by rest of the material from the second bar (measure 42) performed by the clarinet in measure 95. At Rehearsal 6 this opening toccata figure plays over a variant of the Enigma Theme played by the cellos and basses. One major implication of this pairing is the repetition of the opening toccata figure at the conclusion of this movement contrapuntally alludes to the Enigma Theme’s starting phrase. 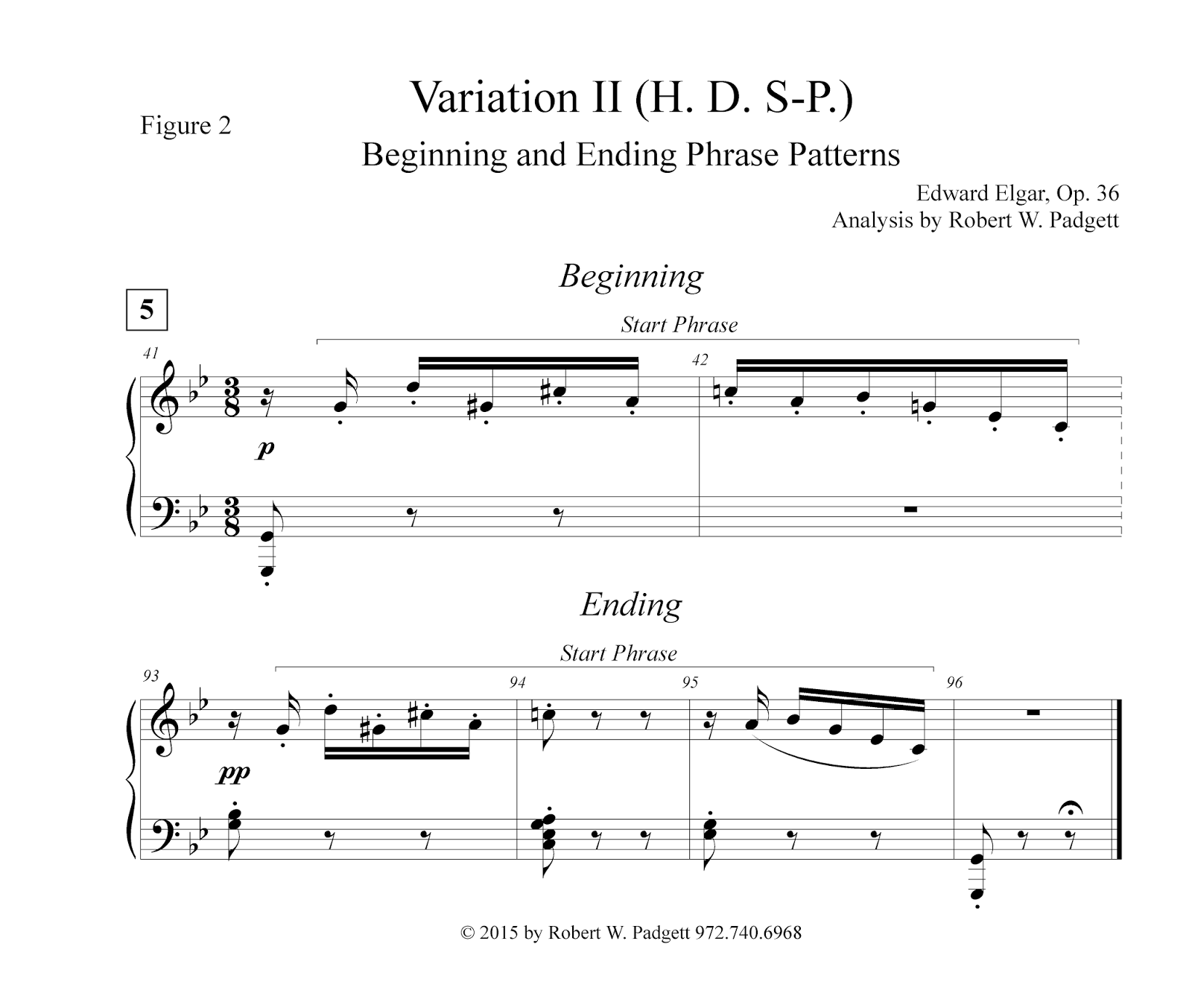 Variation III (R. B. T.) starts with a basic accompaniment figure (measure 97) which is restated at the end (measure 132). Unlike the preceding movements, the entire opening phrase in measures 98-104 is reprised at the end (measures 124-130). This mirrors the ABA ternary structure of the Enigma Theme. What is noteworthy is the identical accompaniment figure begins and ends this movement. 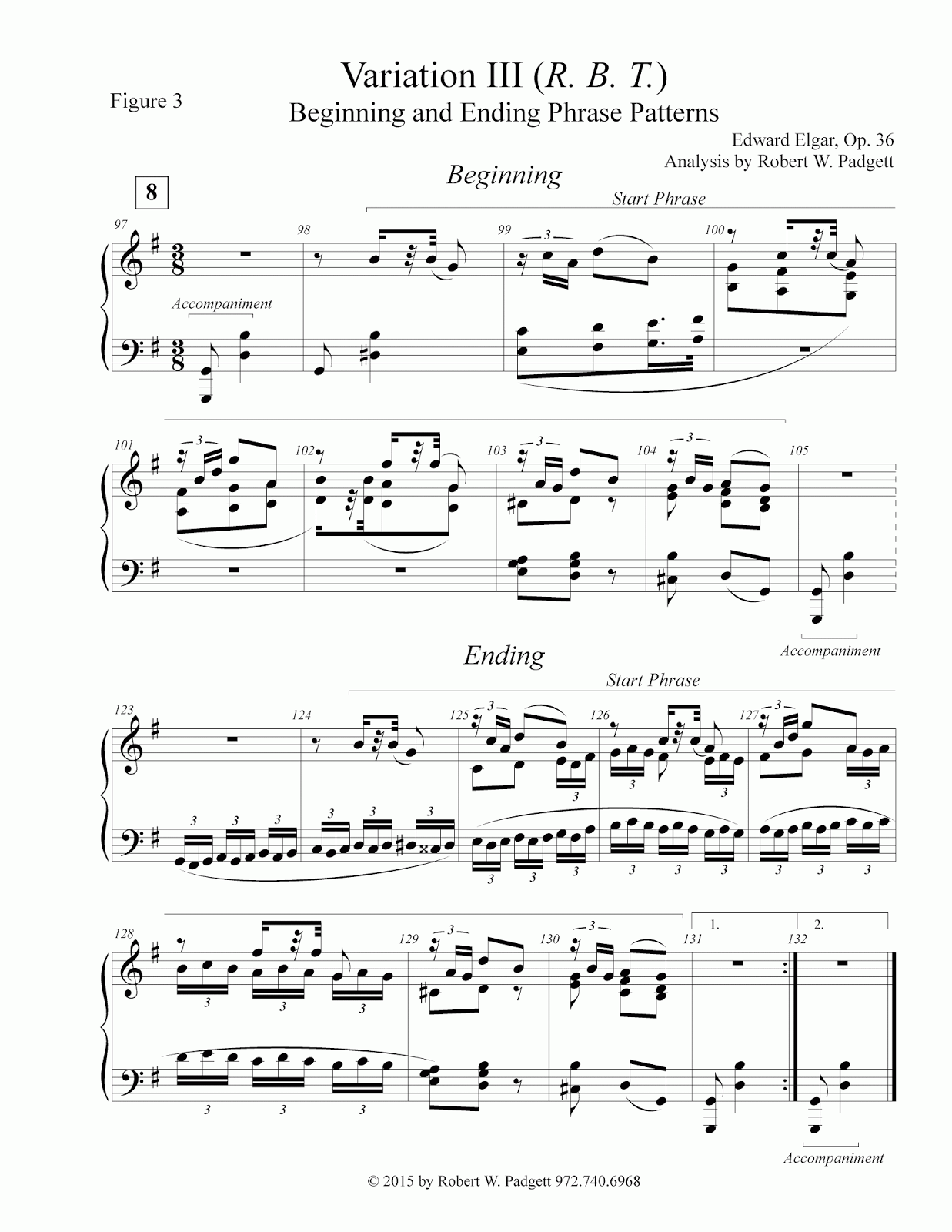 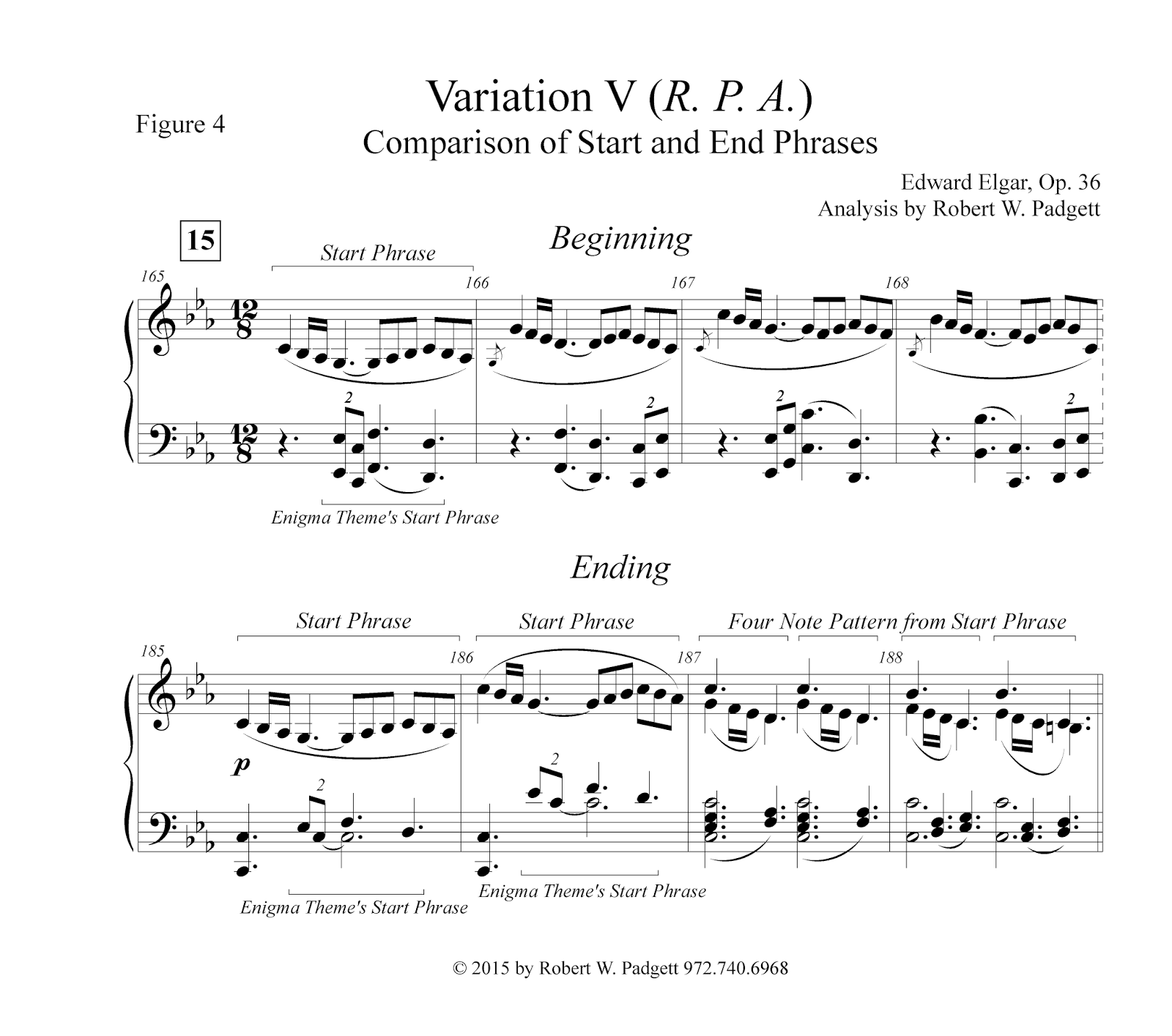 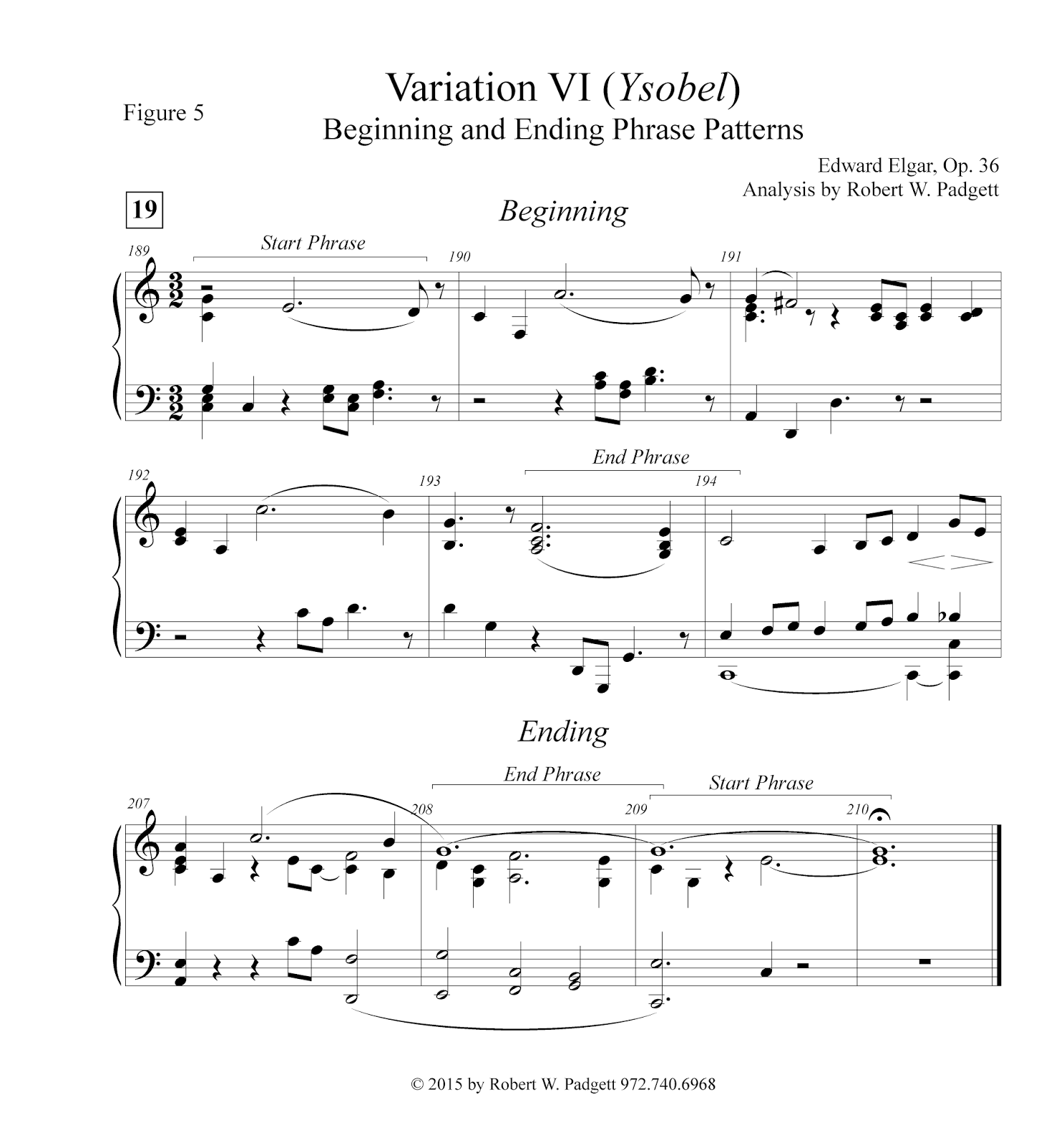 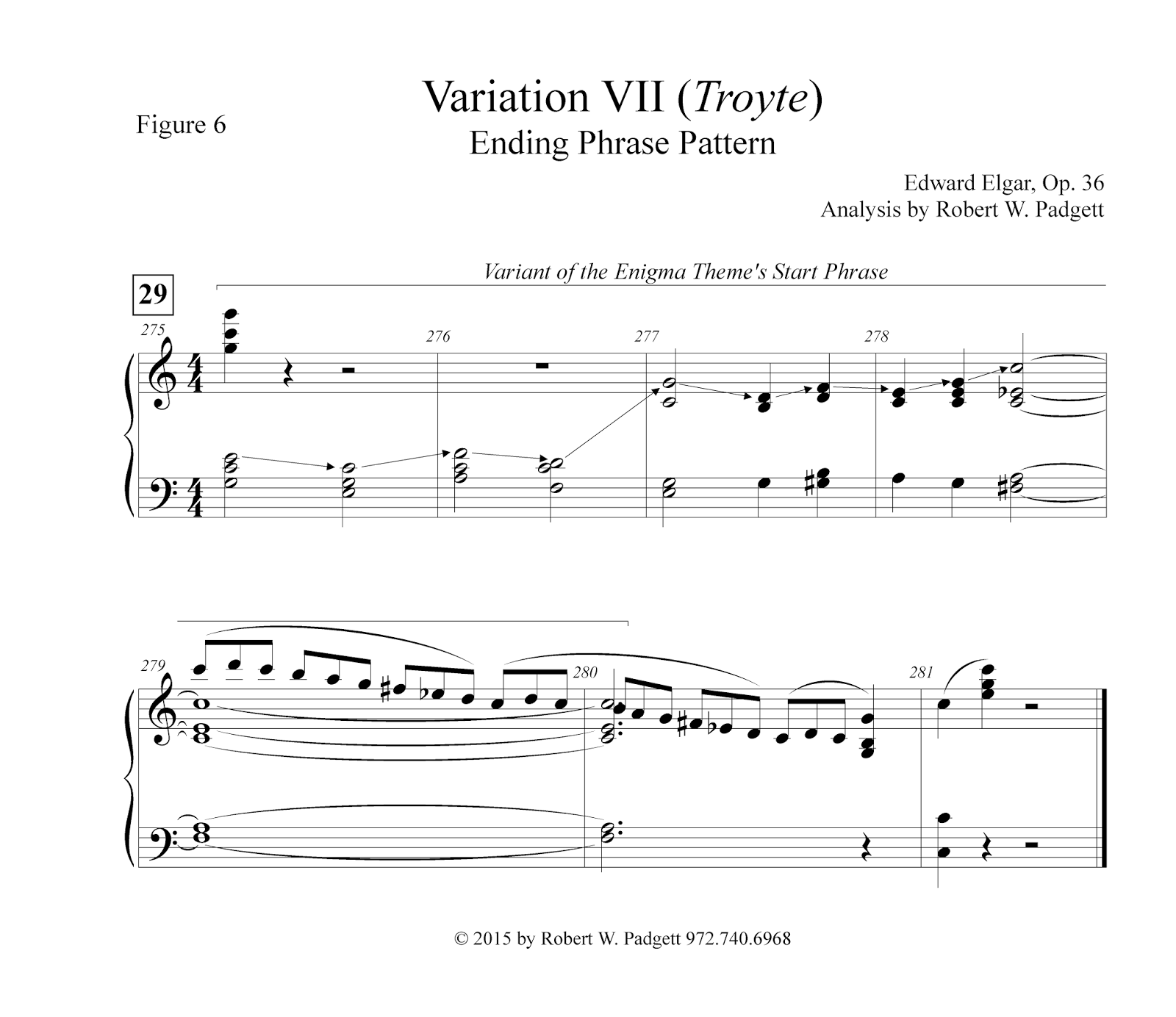 Variation IX (Nimrod), the most elegiac of the series, begins slowly with a poignant variant of the Enigma Theme played pianississimo (ppp) in measure 309. This inaugural phrase is restated as the ending (measure 348) in a dramatic fortissimo (ff) before diminishing rather suddenly to pianissimo (pp) before fading away. This type of ending in which the Enigma Theme’s opening phrase is restated is also found in Variations I and VII. 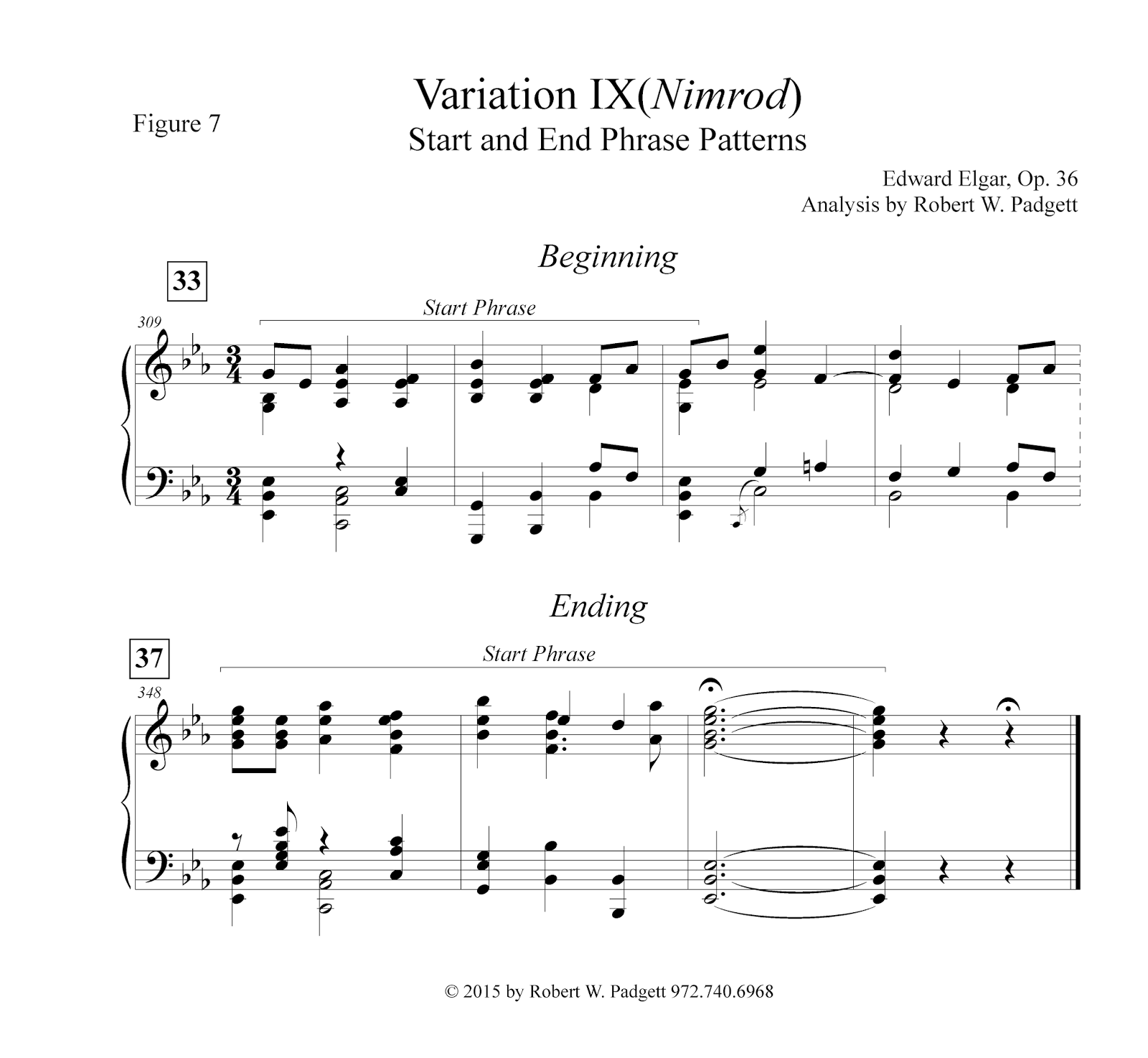 Variation X (Dorabella) begins with two rapid accompaniment figures of three 32nd notes answered by a four-note 16th note figure intended to mimic Dora Penny’s stutter. This movement is distinguished by the absence of any clear indications of the Enigma Theme’s opening phrase.  Four bars from the end at Rehearsal 46 the initial accompaniment figures of three 32nd notes reappears and is again answered by the four-note 16th note stuttering motif. Six notes followed by four at Rehearsal 46 may be seen as a coded reference to the number 46, the same chapter in the Psalms that inspired the lyrics for Martin Luther’s famous hymn, Ein feste Burg (A Mighty Fortress). What makes this movement vitally important to resolving the mystery of the covert principal theme is that the inner voice restates in an augmented from the first four notes of closing phrase from  Ein feste Burg in measures 383-387, and again in measures 406-410. More remarkable still, these first four notes and the final four from the closing phrase of Ein feste Burg are restated by the stuttering motif in measures 422-424. 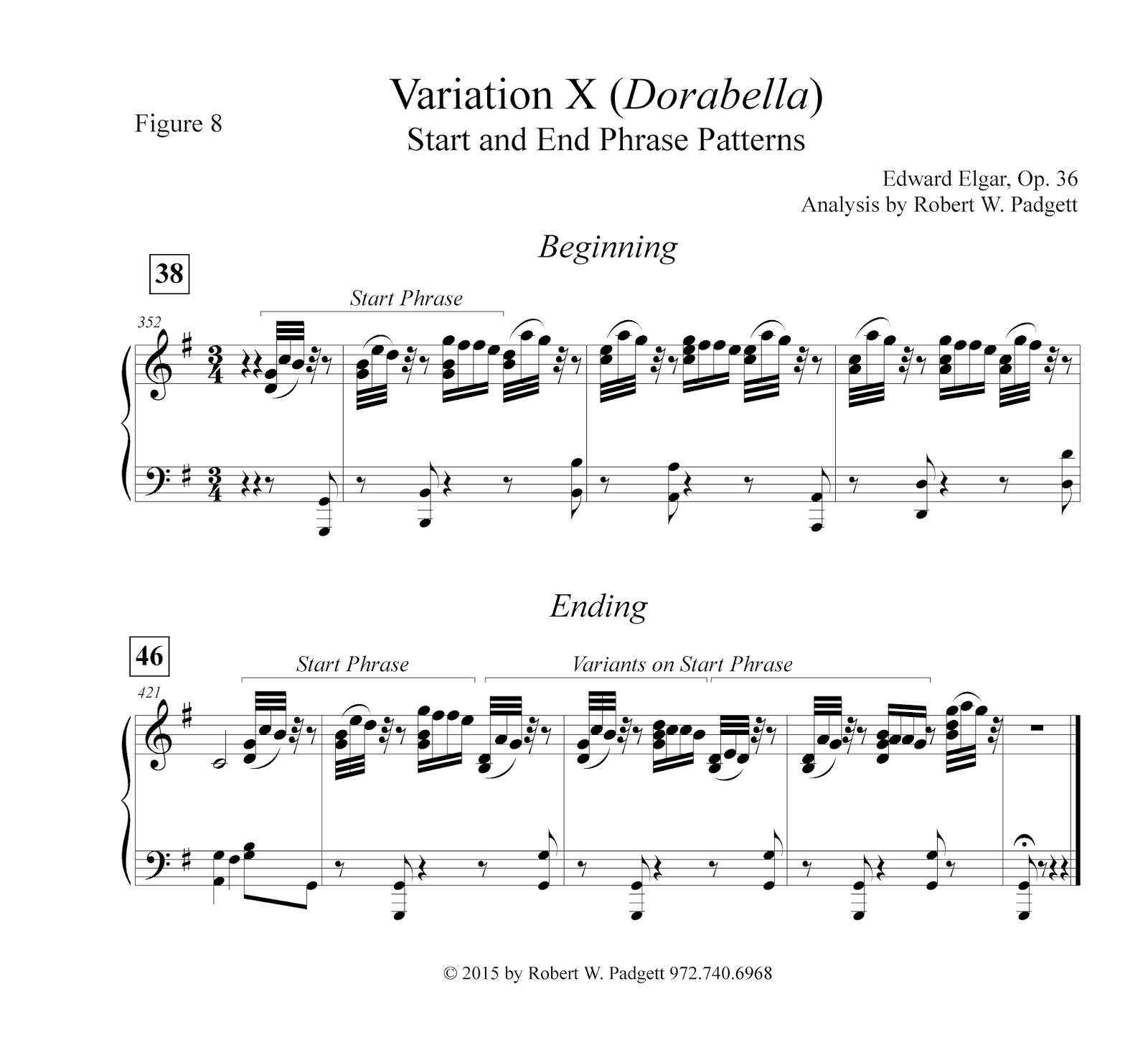 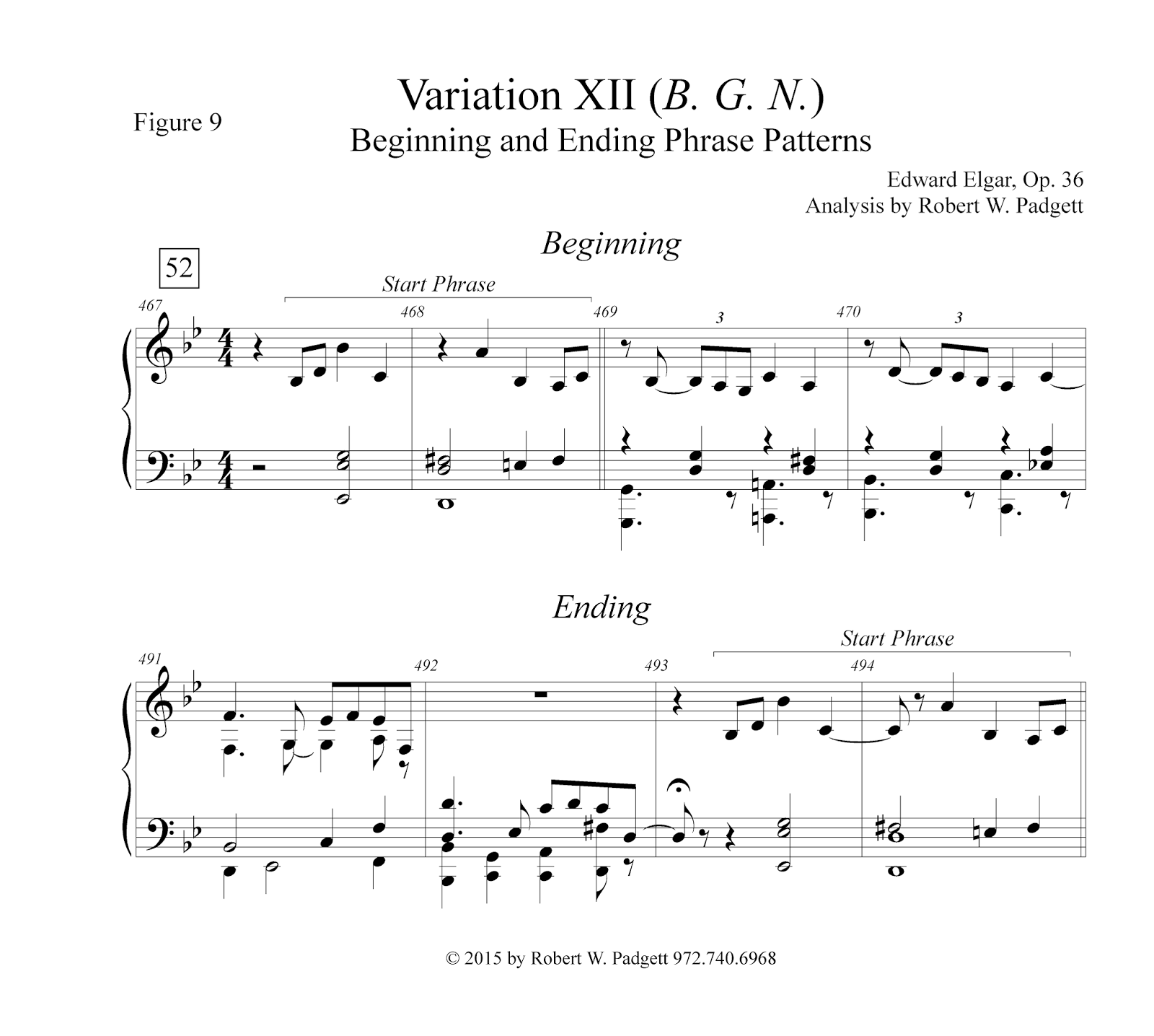 Variation XIV (E.D.U.) does not begin and end with the same thematic material. The reasons for this divergence from the other Variations are it has a sixteen measure introduction with a considerably expanded ending. The first real thematic material is not introduced until Rehearsal 62 (measure 565). At the behest of conductor Hans Richter and August Jaeger, the original ending was expanded by nearly 100 measures following the June 1899 premiere. Consistent with a pattern exhibited by earlier movements, the opening thematic material presented in measures 565-566 is restated in measures 683-684 almost exactly 100 measures before the appended ending. The originally shorter Finale actually mirrored a pattern displayed in Variations II, V, VI, IX, namely that the opening thematic material reappears close to or at the end. 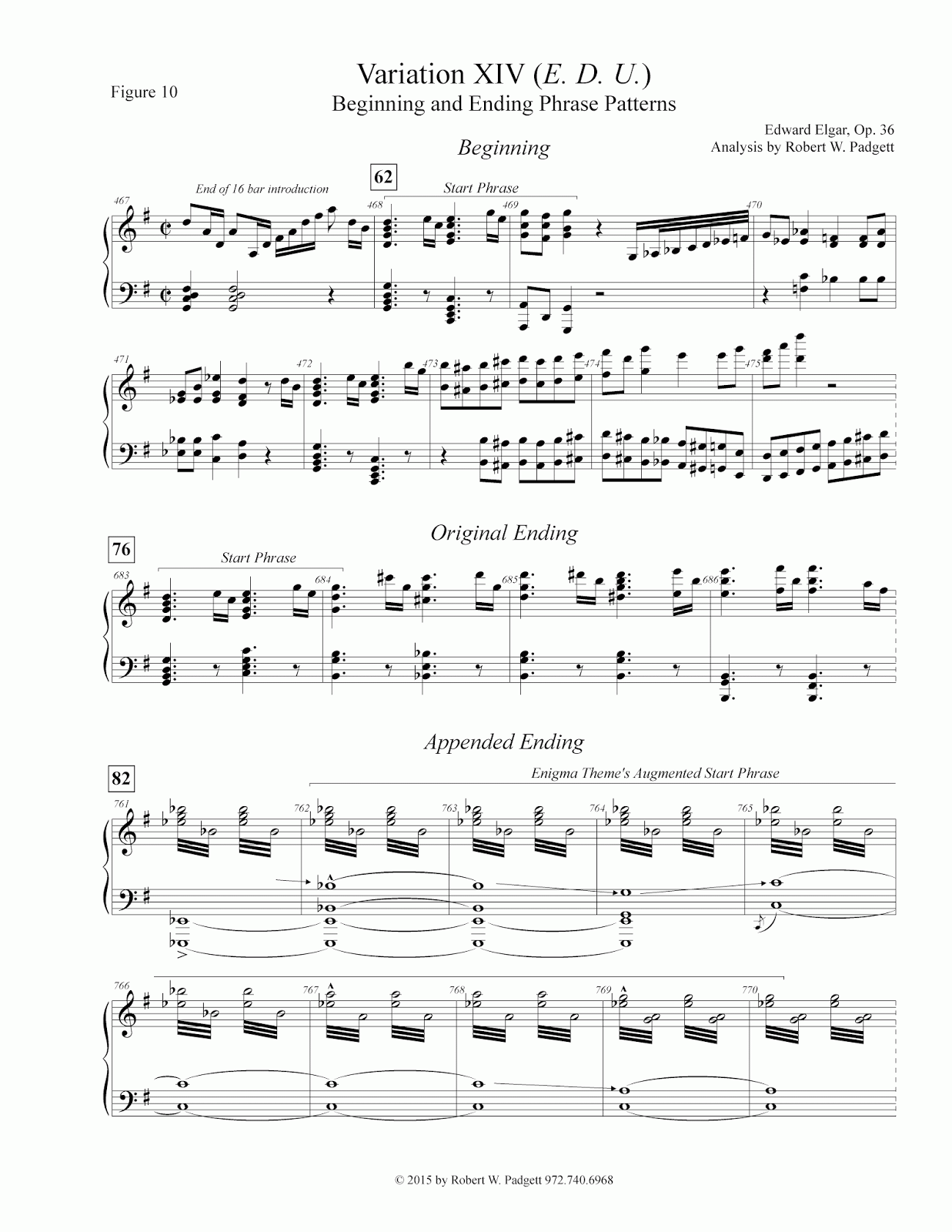 Conclusion
An examination of the Enigma Variations reveals a persistent pattern in which the first phrase is restated at or near the conclusion of the majority of the movements. This trend holds true for Variations I, II, III, V, VI, VII, IX, XII, and XIV. The exceptions to this pattern are the Enigma Theme and Variations IV, VIII, XI, and XIII. As an aside, it is remarkable to observe the sum of these latter Roman numerals (4+8+11+13) is 36, the opus number for the Enigma Variations.
In the search for the covert principal theme, it proves critical to recognize that most of the Variations conclude with their beginning phrases sourced either from the countermelody, some variant of the Enigma Theme, or both. As most of the movements end with their beginning phrase, this insight strongly implies Elgar’s counterpoint between the Enigma Theme and the covert principal theme models this approach. That would mean the Enigma Theme’s counterpoint concludes with the covert theme’s opening phrase, and more decisively, that it begins with the covert theme’s final phrase.
A preliminary mapping of Ein feste Burg with its original phrase structure (ABABCDEFB) "through and over" the Enigma Theme proved it was a perfect horizontal fit with the opening 17 measures. Even so, it produced unacceptable dissonances which precluded a credible counterpoint. When applying Elgar’s counterintuitive tact of mapping the covert Them in retrograde starting at the end of measure 19, a credible counterpoint between Ein feste Burg and the Enigma Theme emerges. The use of retrograde motion in formulating a counterpoint sounds enigmatic as the covert Theme is played backward.
Regarding the Enigma Theme Elgar wrote, “The drop in the seventh in the Theme (bars 3 and 4) should be observed.” For over a century no one could discern the cryptographic significance of that statement. Both the statement and the number seven are odd. By observing the seventh, Elgar was alluding to the importance of the seventh and final phrase of the covert principal theme (ABCDEFB) because it unpredictably marks the beginning of the counterpoint between the covert melody and the Enigma Theme.
This analysis of the Enigma Variations reveals the supremacy of the ending phrase over the beginning, an insight amplified by the quotation from Longfellow’s Elegiac Verse Elgar penned at the conclusion of the expanded Finale. “Great is the art of beginning, but greater the art is of ending.” To learn more about the secrets of the Enigma Variations, read my eBook Elgar’s Enigmas Exposed. Like my heavenly Father’s gift of salvation and forgiveness, the price is free.
Soli Yah Gloria
Posted by Robert Padgett at 10:32 AM

Fascinating ... I listened to all the youtube pairings of theme and variations with Ein Feste Burg, and could find no fault ... and what's the probability of that being a coincidence? Just troubled by one thing - didn't Elgar say over and over again that it was a well known tune? I'd have to say that's the first time I've listened to Ein Feste Berg, and I've played in amateur orchestras and sung i choirs for much of my life... but never mind it fits! (And that's without considering all the numerical and alphabetic correspondences. Well done, sir!