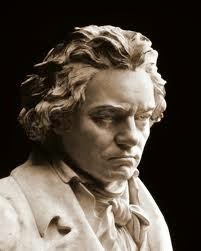 Don't only practice your art, but force your way into its secrets; art deserves that, for it and knowledge can raise man to the Divine.
Ludwig van Beethoven

No one held Ludwig van Beethoven in higher esteem than Edward Elgar. In a lecture at the University of Birmingham he confessed, “When I see one of my own works by the side of, say, the Fifth Symphony [of Beethoven], I feel like a tinker may do when surveying the Forth Bridge…” Elgar owed a singular debt of gratitude to Beethoven. In September 1898 when he vowed to abandon composition altogether, his friend August Jaeger invoked the plight of Beethoven to dissuade him from unilaterally surrendering his art. Jaeger condemned Elgar’s ingratitude for his profound musical gift, summoning the towering model of Beethoven who persisted in pouring forth a stream of masterpieces in the face of seemingly insurmountable obstacles, most remarkably his deafness.
In gratitude for Jaeger’s critical encouragement that spurred him on to compose one of his most popular symphonic works – the Enigma Variations – Elgar dedicated the elegiac Variation XI Nimrod to his faithful friend and champion at Novello. For a set of pianola rolls published in 1929, Elgar explained Variation IX was “the record of a long summer talk, when my friend discoursed eloquently on the slow movements of Beethoven…it will be noticed that the opening bars are made to suggest the slow movement of the Eighth Sonata (Pathétique).”[1]
The bond between Elgar’s Enigma Variations and Beethoven is not exclusively confined to merely the elegiac contours of Nimrod. There is an even more subtle yet profound parallel, one that runs through the music of at least two other great composers admired by Elgar, namely J.S. Bach and Robert Schumann. This common theme is musical cryptography, specifically the practice of forming words and names within musical note sequences.
In what is arguably the zenith of Western music, the Art of Fugue BWV 1080, Bach spells his name in the final fugue with the notes B-flat, A, C, and B (which in the German system is represented by the letter H). Beethoven's sketchbooks from 1822 reveal he was contemplating writing an Overture on the name of Bach. 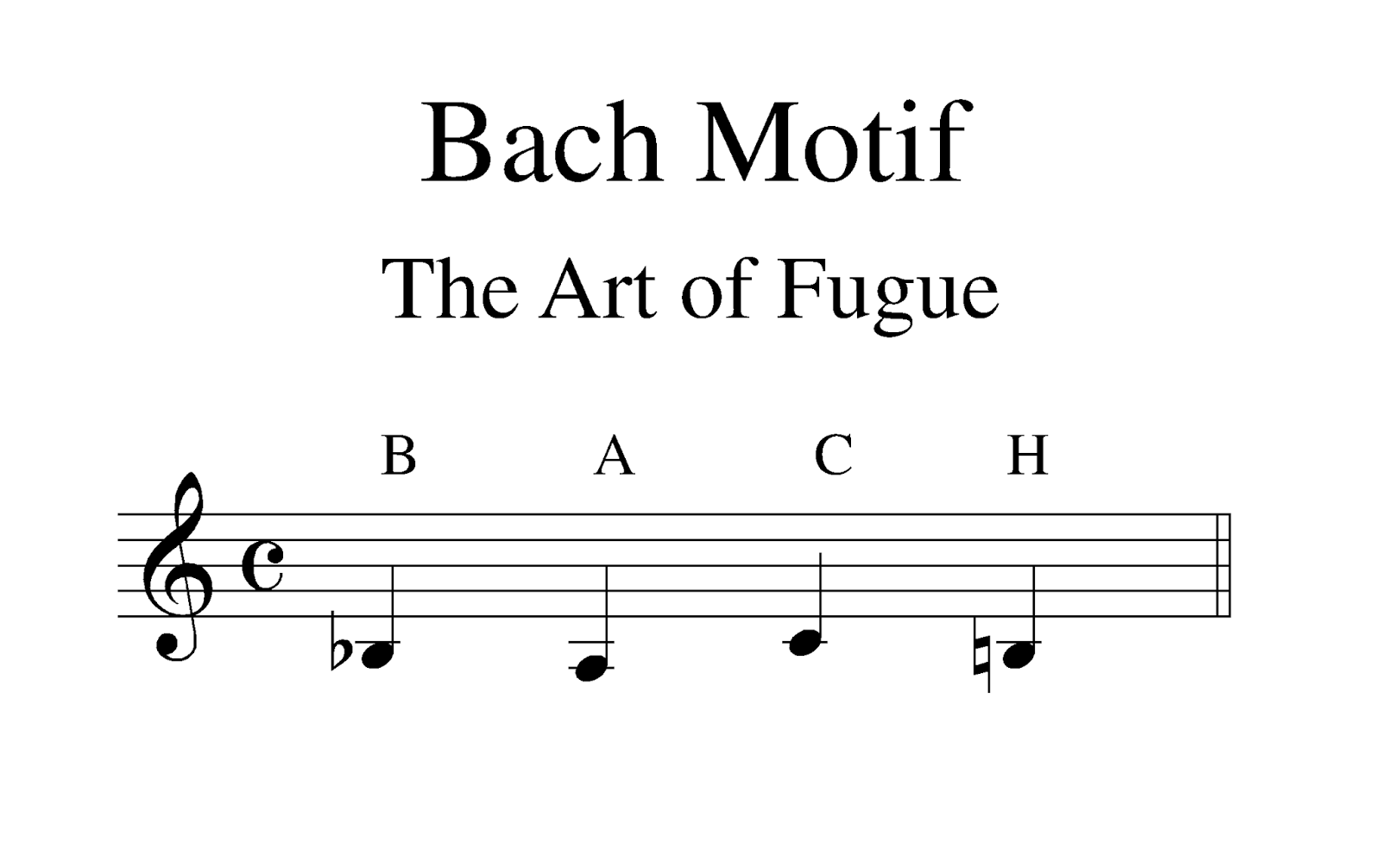 Elgar is known to have encoded words in his music using note letter sequences. An early example is his Allegretto on G-E-D-G-E for violin piano. Composed in 1885, it introduces a musical motif that spells the name of the Gedge sisters to whom the work is dedicated. Schumann spells a musical version of his name in his Carnaval Op. 9. With the notes E-flat, C, B, and A, he conveys the letters S-C-H-A from Schumann. This reading is possible because in E-flat is referred to as Es in German, a phonetic version of S. Another example of Schumann’s musical cryptography appears in two movements (Romanze and Finale) he contributed to the FAE Sonata dedicated to violinist Joseph Joachim.  The movements invoke the musical motif F-A-E, the initials for Joachim’s Romantic German motto “Frei aber einsam” meaning “Free but lonely.” In a remarkably parallel, Elgar encodes these same initials in Variation XIII with the key letters of the Mendelssohn fragments (F minor, A-flat major, and E-flat major). Schumann contributed two of the four movements to the FAE Sonata, a Romanze, and a Finale. This presents yet another striking similarity with Elgar's Enigma Variations because it too has a Romanze (Variation XIII) and a Finale (Variation XIV).
On two occasions in Variation XIII from his Enigma Variations (Op. 36), he spells the phrase “Dead God.” Appropriately enough, the lowest notes of the score are D-E-A-D. These are immediately followed by the notes G-D performed in the highest melody in the score. The first occurrence is in measures 497 through 500, and the second in bars 529 through 532. In both cases, the letters for dead are stated in the correct order by the bass line. This is immediately followed by the triple statement of the notes G-D by the flute, oboe, and clarinet –a shrouded allusion to the Trinity. 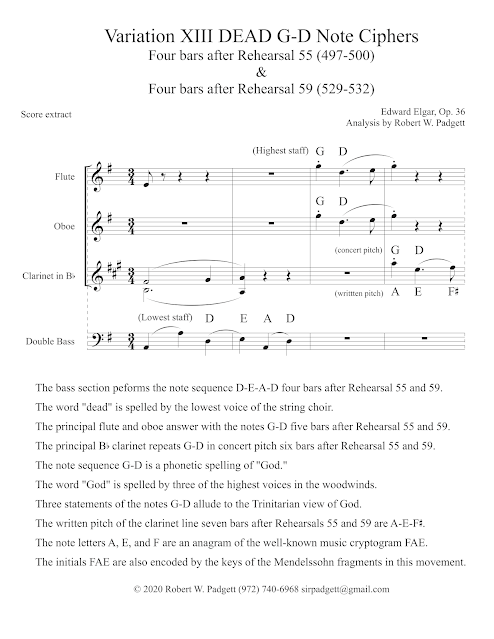 Of course, Elgar’s musical references to God would not be complete without at least one to his arch-nemesis, the devil. In the Demons’ Chorus from Gerontius Elgar stealthily ridicules the composer Charles Villiers Stanford by enciphering Satanford.[2]
Elgar and Schumann encoded words in their music using note letter sequences. Were they conceivably influenced to do so by no less than Beethoven himself? In the grand Finale of his Ninth Symphony, Beethoven literally spells the word DEAF twice in the opening theme of the Allegro assai. As a key building block of the melody, the DEAF motif frequently reoccurs throughout this concluding movement. 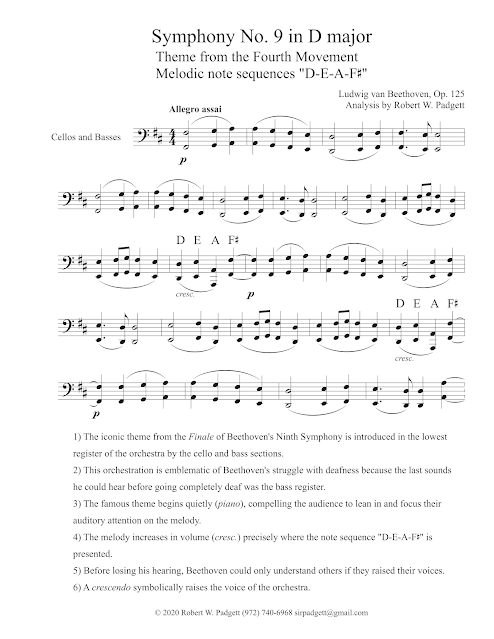 Why would Beethoven encode his infirmity in English in the most famous theme from his Ninth Symphony? Admittedly he could not invoke the German term for deaf (taub) because only two of its letters are found in the musical alphabet. Besides the relative simplicity of encoding this term in English using musical notes, the most obvious explanation is the Ninth Symphony was commissioned by the Royal Philharmonic Society of London. In recognition of his English-speaking patrons, Beethoven transformed his worst malady into his greatest melody.
The DEAF motif is remarkable because it is the only place in the opening theme where Beethoven inserts a crescendo to designate an increase in volume. As the theme spells out deaf, the volume rises suddenly as if to call attention to that note sequence. In the first stanza, the words that fall on those notes are "streng geteilt/Alle" which means "sternly divided" or "strictly divided" and "all." In the second stanza, the words are "dem Erdenrund" which in English are "around the world." Are these not vivid descriptions of Beethoven's curse since his deafness sternly separated him from all the world?
The Finale is a set of variations, and not surprisingly Beethoven encodes the word deaf in a variety of ways within the opening theme. German spellings are predominantly phonetic, so it comes as no surprise the word deaf is also spelled out ten times as D-E-F. 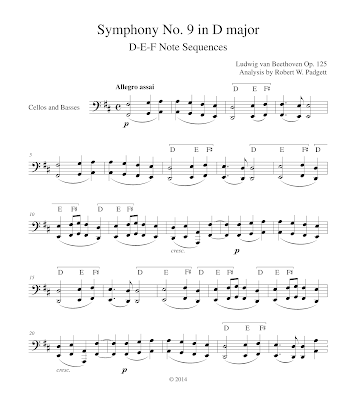 The Finale includes a double choral fugue, illustrating Beethoven’s obsession with counterpoint. A common contrapuntal device is to restate a series of notes in reverse order, a practice known as retrograde. Beethoven adopts this tact with the notes D-E-F by restating them in reverse nine times as F-E-D. 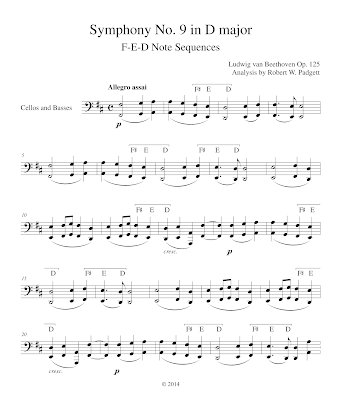 An alternative spelling of F-E-D is F-D, a note sequence that also appears four times in the opening theme of the Finale. 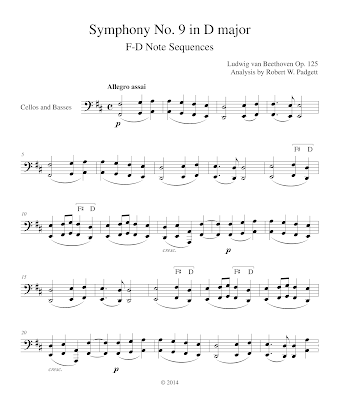 In all, there are at least 25 occurrences of some form of the word deaf in the opening 24 measures of the Finale. Beethoven’s genius is on full display as he translates the English term for his debilitating infirmity into an elegant cryptographic counterpoint. The DEAF motif surfaces in the fugato section of Beethoven's final Piano Sonata No. 32 Op. 111. The discovery of this particular sequence of notes in the Ninth Symphony is therefore not an isolated incident, but part of a larger pattern that emerges in Beethoven's last and greatest works. These discoveries demand further research into Beethoven's use of music cryptography as a cathartic apotheosis of his greatest affliction. Elgar could not have had a more exemplary model in mind than Beethoven when he composed Nimrod. To learn more about the secrets of the Enigma Variations, read my free eBook Elgar’s Enigmas Exposed.
Soli Yah Gloria
[1] Rushton, Julian. Elgar: Enigma Variations (Cambridge Music Handbooks). New York: Cambridge University Press, 1999, p. 46

The main subject from the fugato in the development section of Beethoven's final Piano Sonata No. 32 Op. 111 spells "DEAF." It was composed in 1821-22.
https://www.reddit.com/r/piano/comments/96p6hs/i_just_realised_the_main_subject_of_the_fugato_in/