In 1976 Theodore van Houten first proposed the patriotic British song Rule Britannia as the secret principal Theme to the Enigma Variations. This theory relies primarily on the repeated use of the word “never” in the original 1899 program note and a series of falling thirds on the words “never, never, never” in the chorus of Rule Britannia. According to Houten, the resemblance between the falling thirds and the Enigma Theme's opening notes suggests a fleeting melodic connection. The esteemed Maestro Mark Elder echoes this opinion. As a substantial number of tonal works use falling thirds in the melody, this correspondence is far from isolated. The salient passage from the lyrics reads, “Britons never, never, never shall be slaves.” Observe the word “never” appears three times in succession in the lyrics, but only twice non-consecutively in the original program note cited below:

The Enigma I will not explain – its ‘dark saying’ must be left unguessed, and I warn you that the connection between the Variations and the Theme is often of the slightest texture; further, through and over the whole set another and larger theme ‘goes’, but is not played . . . So the principal Theme never appears, even as in some later dramas – e.g., Maeterlinck’s ‘L’Intruse’ and ‘Les sept Princesses’ – the chief character is never on the stage. [1]

The impression of some tangential link between the Enigma Theme and Rule Britannia is superficial, failing to withstand any rigorous contrapuntal scrutiny. To avoid a genuine test of his theory, Houton conveniently denies the existence of a counterpoint between the two melodies. If that were the case, why grasp a motif of falling thirds to conjure some link between the two? Either there is a true counterpoint, and by extension, a real melody, or there is not. He cannot have his contrapuntal cake and eat it too. This still leaves unanswered the question of why Elgar would conceal a patriotic theme in the first place. He composed an ample number of patriotic works, so what rationale could there be to hide the obvious? There would certainly be nothing humorous in obscuring what is already known about him. Elgar was proud of his country and its traditions and was unashamed to celebrate them in his music. Houton’s theory rests on the absurdity Elgar would want to hide his patriotic verve when his previous works reveal just the opposite.
Besides these issues with Houton’s problematic theory, an even bigger problem is it blatantly contradicts Elgar’s character as a composer. A primary driver behind some of his greatest music was the habit of creating counterpoints to famous melodies. A person’s character is usually a reliable predictor of behavior, and this is undoubtedly the case with Elgar’s Enigma Variations. Two accounts from his life illustrate his undeniable fascination with writing counterpoints to famous themes. At age 12, Elgar helped prepare the orchestra parts of Handel’s “Messiah” for the 1869 Three Choirs Festival, describing the experience in these words:

I composed a little tune of which I was very proud. I thought the public should hear it, but my opportunities of publishing it were decidedly few. I took my opportunity when my father was engaged in preparing the Handel parts for the forthcoming festival. Very laboriously I introduced my little tune into the music. The thing was an astonishing success, and I heard that some people had never enjoyed Handel so much before! When my father learned of it, however, he was furious! [2]

In 1901 at age 42, he composed the Cockaigne Overture Op. 40. His sketchbook shows he conceived of the lover’s theme as a counterpoint to the “Wedding March” from Felix Mendelssohn’s incidental music to A Midsummer Night’s Dream. Elgar invoked this counterpoint because Mendelssohn’s music is indelibly linked to marriage, and there was some concern the lovemaking portrayed in the overture was not “strictly proper.” [3] The counterpoint is an example of Elgar’s practical jokes, or what he called japes. The joke involved creating a counter-melody to a famous tune, one that is not openly stated in the overture. Mendelssohn’s “Wedding March” may therefore be described as an unstated principal Theme, something analogous to the hidden melody of the Enigma Variations completed two years earlier (Figure 1.1). This jape involves a counterpoint to a hidden theme, so it is safe to abandon a core tenant of Houton’s theory (i.e., “anticounterpointalism”) as untenable. 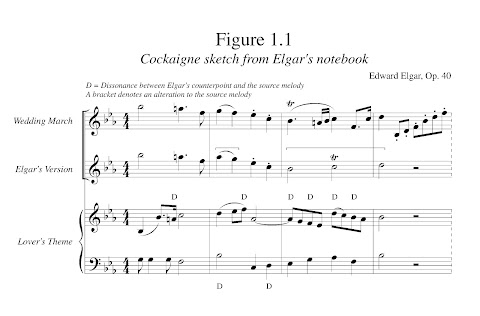 In an autobiographical sketch published in the October 1901 issue of The Musical Times, Elgar displays his musical sense of humor by cleverly inserting God Save the King into the second movement of Tchaikovsky’s Symphony No. 6. In this instance, Elgar mingles two famous melodies together into an artful counterpoint (Figure 1.2). Contrary to Houten’s misinformed view, Elgar’s sense of a musical jape is not the absence of a counterpoint but the very opposite. It should be observed that Elgar's version of God save the King is in an augmented format. 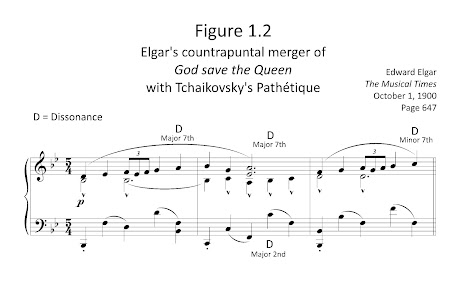 Elgar’s history makes it sufficiently clear he relished writing counter melodies to famous themes, so any thoughtful investigator should take the composer at his word when he explained the Enigma Theme is a counterpoint to a well-known melody. Houton makes the mistake of preferring his own assumptions rather than deferring to numerous public statements issued by Elgar that clearly define the parameters of the puzzle. A credible case can be made only if it can be shown to effectively satisfy six conditions Elgar gave describing the relationship between the Enigma Variations and the covert principal Theme. Obtained directly from Elgar’s recorded words by multiple, independent, unimpeachable sources, those six conditions are listed below:
Any theme that violates just one of those six conditions must be ruled out as invalid. The first and foremost test is to play a candidate melody “through and over” the Enigma Theme to assess whether there is credible evidence for both a contrapuntal and horizontal fit. Before attempting this, it is first necessary to adapt a prospective melody to mirror the Enigma Theme’s shifts between the major and minor modes of G. These modulations are necessitated by the structure of the Enigma Theme, which opens in G minor (measures 1-6), continues in G major (measures 7-10), returns to G minor (measure 11-16), cadences in G major (measure 17), and modulates back to G minor in the bridge leading to Variation I measures 18-19). Even when granting these generous accommodations to facilitate a contrapuntal mapping, Rule Britannia still flunks the test. 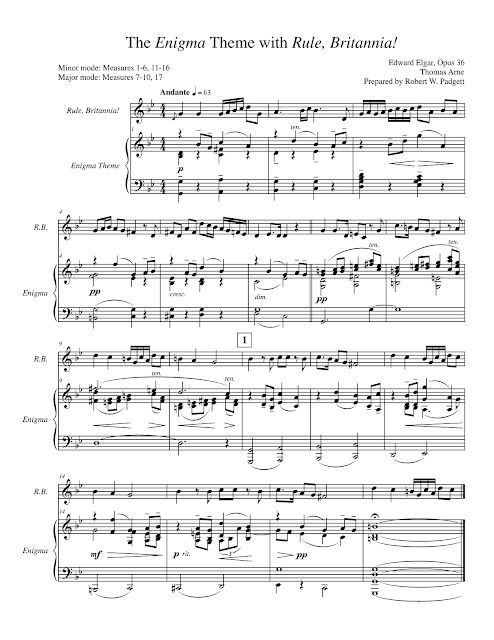 Rule Britannia fails to present a complete or convincing counterpoint over the Enigma Theme’s entire seventeen measures. Strike one. In fact, that patriotic song fails to complete even one full cycle over the Enigma Theme, falling three measures short. Strike two. Houton is correct in claiming there is no contrapuntal relationship between Rule Britannia and the Enigma Theme. The catch is that no counterpoint means no solution. On top of these difficulties, it has never been shown how that patriotic song could conceivably play “through and over” the remaining movements, a requirement Elgar specifically mentions in the original 1899 program note. Strike three. The failure to satisfy these key conditions leads to only one conclusion: Rule Britannia could not possibly be the hidden melody to the Enigma Variations.
The only theme that successfully satisfies all of Elgar’s conditions is Ein feste Burg (A Mighty Fortress) by the German Reformer Martin Luther. That well-known hymn successfully plays one complete cycle “through and over” the Enigma Theme, establishing an uncanny horizontal fit. A precise vertical alignment between the two melodies illustrates Elgar's unique treatment of Ein feste Burg in an augmented form as a retrograde counterpoint. This unconventional method accounts for the profound difficulty in detecting a contrapuntal fit because one typically plays the beginning of a prospective melody over the beginning of the Enigma Theme. Such a predictable approach produces a mismatch, throwing off researchers even when the right melody is assessed.
The case for Ein feste Burg as the covert principal Theme to the Enigma Variations is extensive and persuasive. Confirmation that Ein feste Burg is the hidden theme is given by a diverse range of music ciphers in the Enigma Theme and Variation XIII. Within the Enigma Theme is concealed a Music Box Cipher, Elgar’s “dark saying” linked to the Enigma mentioned in the original 1899 program note. Incredibly, Elgar did not take his secret to the grave, but rather enciphered the answer in the orchestral score. When discovered, the decrypted answer would remain unguessed just as Elgar prescribed. He even went so far as to encode the initials for the hidden melody in the Enigma Theme which modulates between the minor and major modes of G. The accidentals for those two keys are E-flat, F-sharp, and B-flat. Remarkably, the letters of those accidentals furnish the initials for Ein feste Burg.
The odd nickname for August Jaeger’s movement (Nimrod) is linked to the title A Mighty Fortress by one of Elgar’s favorite pastimes, wordplay. When he gave a copy of Longfellow’s novel Hyperion to the conductor Hans Richter following the premiere, Elgar literally gave away the answer. No wonder he suspected the solution would soon be found. Even the wrong date on the original score is a revealing clue since it falls on the anniversary of Luther’s death. According to a scale degrees cipher within the Mendelssohn fragments, the missing initials for Variation XIII (✡ ✡ ✡) are “EFB”, the initials for Ein feste Burg. The mapping of Ein feste Burg over Nimrod is so self-evident that the melodic solution to Elgar's Enigma Variations is as plain a pikestaff.
If he were alive today, Elgar's response to Houten’s solution would likely be, “No. Rule Britannia will ‘never, never, never’ do.” To learn more about the secrets behind one of Elgar’s most celebrated symphonic achievements, read my free eBook Elgar’s Enigmas Exposed.
Soli Yah Gloria 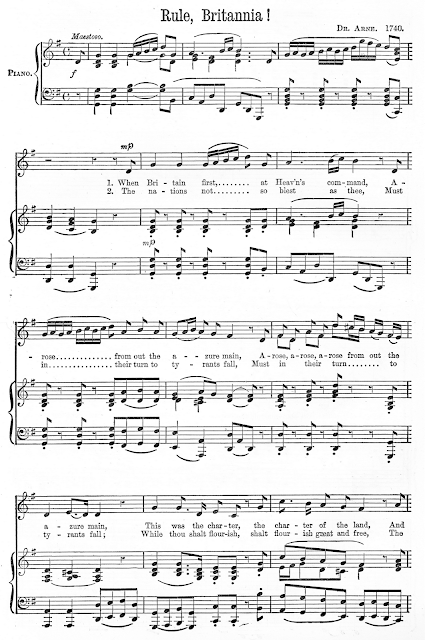