Links between the Enigma Variations and the Turin Shroud 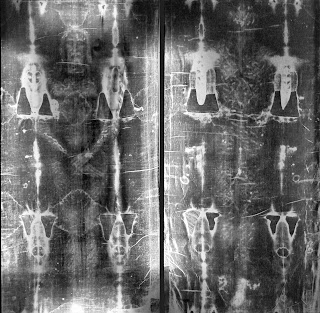 Pope Benedict XVI from his Veneration of the Holy Shroud

During the course of my in-depth study of Elgar’s Enigma Variations, I arrived at the startling conclusion that the Turin Shroud served as a vital source of inspiration for the composer. This was not a preconceived assumption, but rather one crystallized over time by multiple observations. How could the Turin Shroud conceivably inspire Elgar to compose the Variations? As a practicing Roman Catholic, he was certainly aware of that relic’s importance to the Vatican as evidence of the life, death, and resurrection of Jesus. Secondo Pia’s famous photographic negative of the Shroud become international news a mere five months before Elgar began work on the Variations. The Enigma Theme imitates a key feature of the shroud since it is a contrapuntal “negative” of a famous theme. Similarly, the shroud is a photographic negative of a famous person. It is hardly coincidental that the famous theme (Ein feste Burg) on which Elgar based his counterpoint glorifies the famous personage on the Holy Shroud and even names Him in its lyrics. Consider the following observations to determine if one of the greatest orchestral works ever written by an Englishman was inspired by the single greatest relic of Christendom. 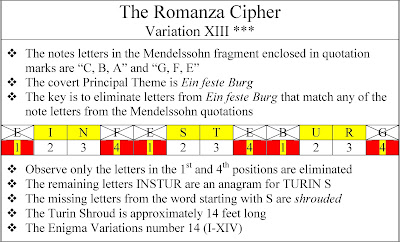 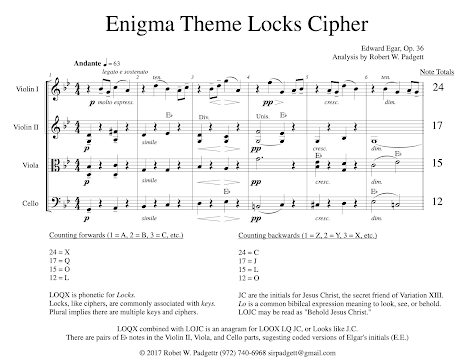 The Enigma Locks Cipher
The opening six measures of the Enigma Theme contain an intriguing cipher based on the number of notes played by each section of the string quartet. When all notes performed by first and second violins, violas and cellos are tabulated over the first six measures of the Enigma Theme, the following sums are realized: 24, 17, 15, and 12. When these note totals are converted into their alphabetical equivalents (1 = A, 2 = B, 3 = C, etc.), they produce the plain text solution “LOQX”. This is phonetic for the term locks. Locks have keys, and so do pianos . . . ciphers. When the same conversion process is applied to the alphabet in reverse order (1 = Z, 2 = Y, 3 = X, etc.), it generates the plain text “CJLO”. This is an anagram of “LOJC”. Lo is a common biblical term meaning to look, see, or behold. “JC” is the initials for Jesus Christ, the secret friend of Variation XIII. “LOJC” may therefore be interpreted to mean “Behold Jesus Christ.” Combining both solution sets of plain text counting in the alphabet from the beginning (the Alpha) and the end (the symbolic Omega) produces “LOQXLOCJ”. This is an anagram for “LOOX LQ JC”, a phonetic rendering of the phrase “Looks like JC”. What looks like Jesus Christ? For many devout Roman Catholics, there can be only one compelling answer: The Turin Shroud. To learn more about the secrets of the Enigma Variations, read my free eBook Elgar’s Enigmas Exposed.
Soli Yah Gloria