I call architecture "petrified music." Really there is something in this; the tone of mind produced by architecture approaches the effect of music.

This is my thirty-first entry posted on the thirteenth of January 2011. With the appearance of the number thirteen and its inversion, it is timely to revisit Variation XIII from Elgar’s Enigma Variations. This movement is divided into five major sections ranging from six to sixteen measures in length: 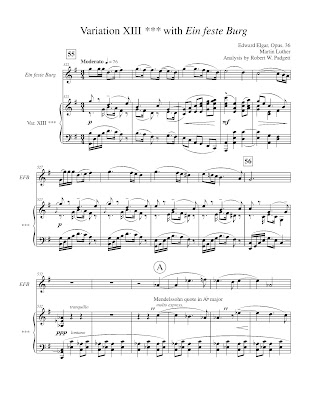 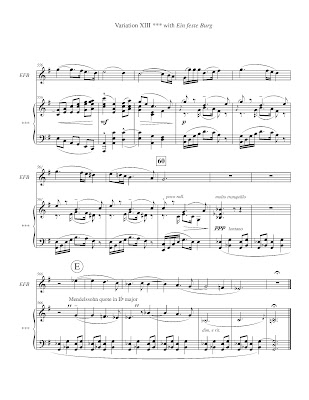 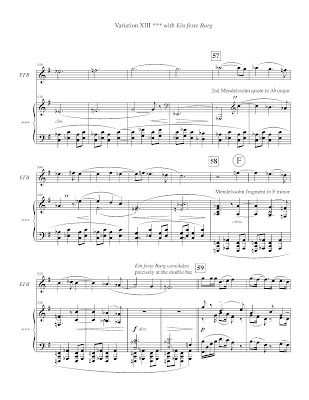 There is a sixth section in measure 51 that forms a plagal cadence, but it is too brief to warrant attention for the purposes of this analysis. Excluding the last measure, there are a total of 50 measures divided into five sections culminating in E-flat major. E is the fifth letter in the alphabet, and the Luther Rose featured above the epigraph has five petals. The prominence of the number five is difficult to overlook, particularly since the composer's initials are E.E. It is equally intriguing Elgar's numerical allusions within the structure of this movement extends to its harmonization. For instance, it is hardly a coincidence the intervals formed by the key modulations between these five suggest the number 1313:
Elgar's cryptographic spelling of 1313 in Variation XIII is significant on a number of levels. For instance, the Roman numeral assigned to this movement is XIII. Another example occurs in the accompaniment to the Mendelssohn fragment consisting of a pulsating figure alternating between the first and third degrees of the scale.

In the A flat major section (measures 532 – 547), the accompaniment figure sways back and forth between A-flat (the first) and C (the third). On the viola the fingering for these notes is 1 and 3, posing yet another spelling of this movement's Roman numerals. In the F minor (measures 548 – 553), the accompaniment figure rocks between F and A-flat, again the first and third degrees of the scale. Finally, in the E-flat major section (measures 564 – 571), the accompaniment figure ebbs between E-flat and G, which again the first and third degrees of the scale. Elgar employs the Alto clef for two instruments in the orchestral score of the Enigma Variations, namely the trombone and viola. The Alto clef, also known as the C clef, closely resembles the number 13. Even the score contains a veiled reference to 1313. Moreover, the number of letters in viola and trombone add up to precisely thirteen.

There is far more to this puzzle than just the repetition of the numbers one and three. Consider the following observations:

A Rose By Any Other Name

There are many more pieces to this exquisite puzzle that time and space prevent from exploring at length.  For instance, consider the cryptic symbolism Elgar gave Variation XIII in the form of three asterisks. Elgar was a Roman Catholic, and his use of the asterisks (***) suggests by their floral appearance an ancient rite of the Roman Catholic Church. In the fifth century, the Pope consecrated roses and had them placed over confessionals to denote secrecy. The rose is the emblem of silence, accounting for the Latin phrase sub rosa. In more recent times this practice developed into the ceremony of the Golden Rose. On the fourth Sunday of Lent (Laetare Sunday), the Pope wears rose-colored vestments and blesses a Golden Rose. The rose symbolizes Christ because he is described in scripture as “the flower of the field and the lily of the valleys.” In poetry, Jesus is metaphorically portrayed as a Rose. One superb example of this practice is displayed in a poem by W. B. Yeats called The Secret Rose. This poem first appeared in September 1896, three years before Elgar completed the Enigma Variations. Elgar admired Yeat's poetry and set at least one of his poems to music in 1901. It is remarkable the rose is also a symbol for Martin Luther and the Rosicrucian Order. The broad outlines of this overview point from many different angles at the same thing, namely that Christ is Elgar's secret friend. Elgar was a true tone poet of the highest rank whose talent for musical cryptograms equals if not eclipses those of his musical forebears. To learn more about the secrets of the Enigma Variations, read my free eBook Elgar’s Enigmas Exposed.

Posted by Robert Padgett at 7:47 PM