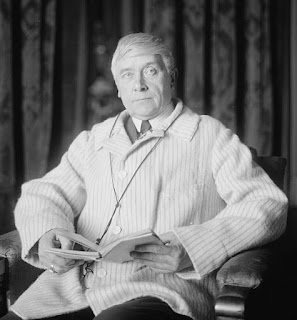 So the principal Theme never appears, even as in some later dramas – e.g., Maeterlinck’s ‘L’Intruse’ and ‘Les sept Princesses’ – the chief character is never on the stage.

The British romantic composer Edward Elgar furnished written remarks for the historic June 1899 premiere of the Enigma Variations in a letter to Charles Ainslie Barry. Elgar’s commentary appears in the original program note in which he refers to the Belgian playwright Marice Maeterlinck and two of his plays, L’Intruse (The Intruder) and Les sept Princesses (The Seven Princesses). For a symphonic work dedicated to his friends, it is odd that the only person named in Elgar’s comments is a foreign poet and dramatist.

Why would Elgar refer to a stranger to characterize a work dedicated to his friends? One explanation draws on his expertise in cryptography, the art of encoding and decoding secret messages. Elgar’s obsession with hidden codes merits an entire chapter in Craig P. Bauer’s treatise Unsolved! As an accomplished cryptographer, Elgar devised impenetrable coded messages like the Dorabella Cipher. Could Elgar’s anomalous references to Maeterlinck and two of his plays be a cipher? And could it be connected to the secret melody of the Enigma Variations and the hidden friend?

The conspicuous phrase "Maeterlinck’s ‘L’Intruse’ and ‘Les sept Princesses’" stands out because it is demarcated by dashes. When distilled down to just initials, it harbors a reverse spelling of PSALM (Maeterlinck’s ‘L’Intruse’ and ‘Les sept Princesses’). This is highly reminiscent of another acrostic anagram within the seven performance directions of the Enigma Theme's opening measure that also spells psalm. These coded references to psalm are significant because the title of the hidden melody (A Mighty Fortress) originates from the first line of Psalm 46. In a stunning convergence, the seven-word phrase Maeterlinck’s ‘L’Intruse’ and ‘Les sept Princesses’ has exactly 46 characters excluding spaces. This presents another stunning parallel with the seven performance directions in the first bar of the Enigma Theme that also has 46 characters. 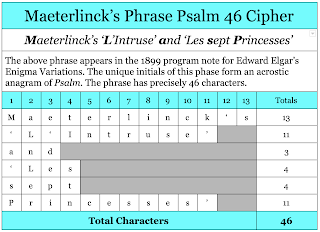 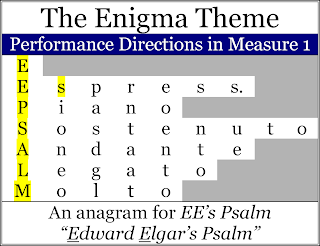 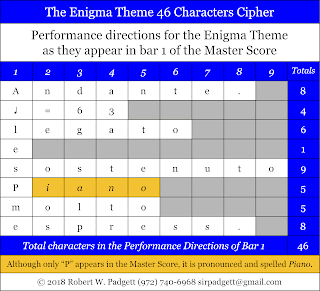 The German title of the covert Theme to the Enigma Variations is Ein feste Burg. The German initials for Elgar’s secret melody (E.F.B.) are ingeniously enciphered by Elgar’s unusual mention of Maeterlinck and his plays. Elgar is an English composer whose explanatory notes for the Enigma Variations are in his native language. In his remarks, Elgar refers to Maeterlinck and the French titles of his plays. Maeterlinck was Belgian. These three nationalities (English, French, and Belgian) are an acrostic anagram of the initials for the covert Theme. The encoding of Psalm, 46, and the initials for Ein feste Burg cannot be causally attributed to coincidence. It is a remarkable display of Elgar’s gift for cryptography.

Another way to analyze Elgar’s use of the name Maeterlinck and the titles of his two plays is to assemble their initials and search for patterns. The six initials for Maeterlinck, L’Intruse, and Les sept Princesses are M, L, I, L, S, and P. The first two (ML) are the initials for Martin Luther. A sea of evidence confirms that the hidden melody to the Enigma Variations is the renowned hymn Ein feste Burg by that famous German Reformation leader.

The first four initials are ML and IL. The initials ML are those for Martin Luther. The letters IL are a phonetic spelling of ill. When paired together, ML and IL may be interpreted as “Martin Luther Ill.” There is a tie into this decryption and Elgar’s original completion date on the autographed score. Elgar incorrectly dated the completion of the original Master Score as “FEb. 18, 1898.” He actually started composing the Enigma Variations on October 21, 1898 and only finished the orchestration by February 19, 1899. The erroneous completion date on the original autograph score is off by one day and one year. Why would Elgar pen the wrong date on the original Finale? February 18 marks the anniversary of Martin Luther’s Finale, his death in 1546. This would account for a coded reference to Martin Luther’s initials and the word ill.

Four of the six initials are an anagram of PSLM, a phonetic spelling of Psalm. A phonetic decryption is justified by Elgar’s use of inventive phonetic spellings in his personal correspondence. For example, he substituted frazes for phrases, gorjus for gorgeous, and xqqq for excuse. The encoding of the word psalm is significant because the title of Ein feste Burg comes from the first line of Psalm 46. That chapter number is cleverly alluded to by the four out of six initials required to phonetically spell psalm.

The initials IL may be reversed to spell LI, the Roman numerals for 51. There is only movement in the Enigma Variations with 51 bars: XIII. That movement is dedicated to a secret friend. The identity of Elgar’s mysterious friend may be found by converting the number of letters from each word into their corresponding letters in the alphabet (1 = A, 2 = B, 3 = C, and so on).

1 is A, 3 is C, 4 is D, 7 is G, 10 is J, and 12 is L.  These solution letters may be rearranged as “GD JC AL.” GD is a phonetic rendering of God. JC is the initials for Jesus Christ, the friend memorialized in Variation XIII. Roman Catholicism teaches that Jesus is the incarnation of God and a member of the Trinity. AL is a phonetic spelling of all. In Collasians 3:11 it reads, “Here there is no Gentile or Jew, circumcised or uncircumcised, barbarian, Scythian, slave or free, but Christ is all, and is in all.” Colossians 1:16 teaches that all things were created through Christ. The term all is theologically linked to Jesus.

Elgar brackets his unusual reference to Maeterlinck and his two plays with dashes. A dash commonly indicates a break in the thought or structure of a sentence, but it can also be a component of Morse Code. Another part of Morse code are dots. There are two periods (e.g.) that resemble dots in between these two dashes. In Morse Code, the pattern “dash dot dot dash” (–··–) represents the letter X. This is the same symbol used on maps to show the location of buried treasure. X marks the spot. The letter X is the same shape as a saltire or Saint Andrew's Cross. Elgar used the letter X as a shorthand for Christ in his correspondence for terms like Xti, Xtianity and Xmas. This coded reference to the letter X alludes to the identity of Elgar's secret friend memorialized in Variation XIII.

The original 1899 program note cites Elgar’s introduction to his symphonic Enigma Variations. In his description of a work dedicated to his friends, Elgar mentions the Belgian playwright Maeterlinck and the French titles of two of his plays. Bookended by dashes, this comment stands out because it refers to a stranger and a foreigner. A cryptanalysis of the phrase “Maeterlinck’s ‘L’Intruse’ and ‘Les sept Princesses’” reveals that it encodes psalm, 46, and the initials for Ein feste Burg, Martin Luther, and Jesus Christ. These solutions are mutually supportive and confirm the identities of the covert Theme, its composer, and the secret friend portrayed in Variation XIII.  It is extraordinary that these solutions are enciphered within the precise section of Elgar's program note that specifically addresses the subject of an absent Principal Theme. Indeed, the answer is encoded within the very question. To learn more concerning the secrets of the Enigma Variations, read my free eBook Elgar’s Enigmas Exposed.

Posted by Robert Padgett at 8:25 AM