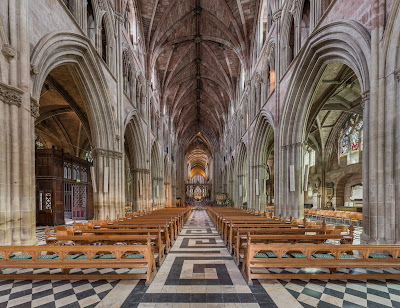 EDWARD ELGAR O.M.
MASTER OF THE KING’S MUSICK
1857–1934
PROFICISCERE ANIMA CHRISTIANA DE HOC MUNDO
[Go forth upon thy journey, Christian soul]
Elgar memorial plaque, Worcester Cathedral
February 23 marks the 85th anniversary of Edward Elgar’s death in 1934 at the age of 76. A memorial service was held at Worcester Cathedral a week after his passing. The London Symphony Orchestra performed music for this solemn occasion selected by Ivor Atkins, an accomplished organist and friend of the composer. The program included the Enigma Theme, Variations I (C.A.E.), IX (Nimrod), XIII (***), and Proficiscere anima Christiana from the sacred oratorio The Dream of Gerontius. Patrick Turner correctly observes that the selection of Variations I and IX demonstrated the “immense significance” exerted on Elgar’s life and work by his wife, Caroline Alice Elgar, and his friend at Novello, August Jaeger. It is difficult to imagine how Elgar could have ever ascended to the heights of international acclaim without the persistent encouragement and support of those two stalwart allies. No great man is an island, particularly a British composer with Elgar's acute sensibilities and towering genius.
Turner reasonably posits the same criterion that called for the performance of Variations I and IX at Elgar’s memorial should also apply to Variation XIII. A distinct commonality shared by Alice and Jaeger was they predeceased Elgar. His wife died in 1920, and Jaeger in 1909. In a stunning twist, the tempo marking for Variation XIII precisely matches Elgar's age at his death. Did the undisclosed dedicatee of Variation XIII also precede Elgar to the grave? The answer is yes, although it must be emphasized this covert friend miraculously rose from the dead three days after his gruesome and unjust crucifixion. It is profoundly ironic the audience remained oblivious to the secret friend's true identity while listening to the meditative strains of His Variation within the hallowed halls of a cathedral. That the secret friend is Jesus would certainly make Variation XIII de rigueur at Elgar's memorial service.
The confidential dedication of Variation XIII to Jesus is not bewildering for those who recognize Elgar was a committed Catholic when he composed the Enigma Variations during 1898-99. In his essay Measure of a Man: Catechizing Elgar’s Catholic Avatars, Charles Edward McGuire obliterates the myth that Elgar was a pro forma Catholic who did not take his faith seriously. McGuire cogently conveys the profound impact of Roman Catholicism on Elgar’s weltanschauung encompassing his family, parochial education, personal and professional relationships, and his music, particularly his sacred oratorios like The Dream of Gerontius and The Apostles. He dedicated the bulk of his major works to God by inscribing the initials of the Jesuit motto Ad majórem Dei glóriam. The Society of Jesus is a Roman Catholic order of scholarly priests founded by Saint Ignatius of Loyola, and its members are known as the Jesuits. 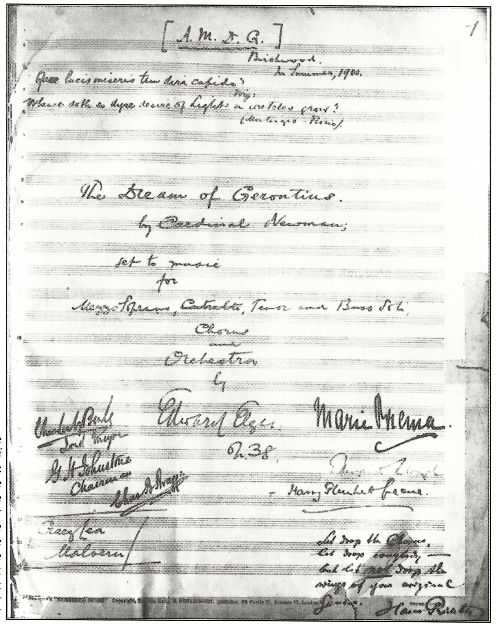 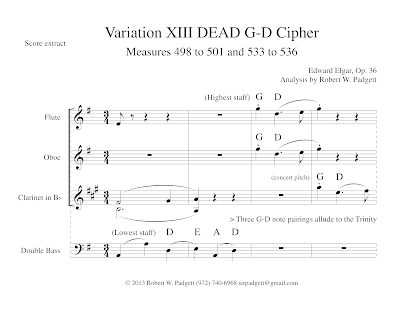 The theological term holy means sacred and set apart for the service of God. It is revealing that the solo B-flat clarinet opens Variation XIII by playing the notes G and D in concert pitch, a phonetic spelling of God. In many ways, Variation XIII is set apart because it does not clearly state a variant of the Enigma Theme and cites melodic quotations from an outside work by a foreign composer. Various cryptograms referring to Jesus in this movement further establish a special sense of holiness. Variation XIII also makes subtle coded references to His Holiness Pope Leo XIII, the presiding pontiff when Elgar composed the Enigma Variations. Pope Leo XIII (born Count Vincenzo Gioacchino Raffaele Luigi Pecci) was the first pontiff to be filmed in 1896 by the inventor of the motion picture camera, W. K. Dickson. The film Santitá papa Leone XIII may be viewed on YouTube. He was also the first pope whose voice was recorded for posterity.

There are at least seven pieces of evidence in Variation XIII that point to Pope Leo XIII. The first and most obvious is the corresponding Roman numerals XIII. The second is that Elgar identified the earliest sketch of Variations XIII with a capital L, confirming that it is an initial and the first letter in a name. The third centers on the three asterisks in the title which suggest the number of letters in Leo. The fourth is the hexagrammic shape of those asterisks as they appear on both the original short score and published score because the coat of arms for Pope Leo XIII prominently displays a hexagrammic star. The fifth is the suggestive subtitle Romanza, for Leo was a Roman Catholic pontiff. The sixth is Elgar’s use of three X’s on the original sketch of Variation XIII in place of three asterisks. The X is a form of the cross, a symbol carried and invoked by the pope during prayer.

It is incredibly revealing that Elgar substituted the letter X for Christ in his correspondence. For instance, in a letter to Jaeger written in September 1899, Elgar substituted the term Xtian for Christian. In 1904, he wrote Xtianity instead of Christianity in a letter to his friend Arthur Troyte Griffith, the dedicatee of Variation VII. The three X’s on the earliest sketch of Variation XIII are also enormously evocative as there were three crosses at the crucifixion of Christ. A plausible decryption of the three cryptic asterisks is LEO.
There is a seventh connection between Pope Leo XIII and the marine imagery of the Mendelssohn fragments. Let us play a Catholic word association game. As previously observed, the word sea is a homophone of see. This presents a translucent association in Catholicism between the word see and the Holy See, the Vatican presided over by the pope. It was also shown how the major and relative minor keys of the Mendelssohn quotations are an anagram of the word FACE. There is a robust association in Catholicism between face and holy because of the Devotions to the Holy Face. In 1885, Pope Leo XIII canonically established the Archconfraternity of the Holy Face.
Some religious relics are identified as Acheiropoieta, a Greek term meaning “made without hand.” These sacred artifacts are believed to possess miraculous depictions of the face of Jesus. The most sensational relic is the Holy Shroud of Turin, an ancient Jewish burial cloth possessing the faint ventral and dorsal images of a crucified man whose wounds correspond precisely with those attributed to Jesus in the Gospel accounts. When the Italian amateur photographer, Secondo Pia, took the first official photographs of the Turin Shroud in May 1898, he made the startling discovery that the dim likeness on the Shroud was a negative that appears as a lifelike positive on the developed photographic plates.

After observing Pia's photographic negative, Pope Leo XIII declared that the image on the Shroud was “a means well-adapted in our time to stimulate everywhere a revival of the religious spirit.” Pia’s photographic negative of the Turin Shroud received approval from the Catholic Church to serve as part of the devotion to the Holy Face of Jesus. This astonishing discovery was granted widespread coverage in the secular and Catholic press and transpired just five months before Elgar began feverishly composing the Enigma Variations. The miraculous photographic negative revealed for the first time what many devout Catholics regarded as the actual image of the crucified Christ. Seeing was truly believing. Elgar’s unwavering faith is demonstrated by coded references to the Turin Shroud, Secondo Pia, and Pope Leo XIII in the Enigma Variations.
Now consider the terms linked overtly and covertly to the Mendelssohn sea fragments: Face, See, and Holy. These may be rearranged to produce the phrase “See Holy Face.” Is that not an exquisite coded reference to the miraculous image on the Turin Shroud? The key signature for the A-flat major Mendelssohn fragments consists of four flats: B-flat, E-flat, A-flat, and D-flat. That sequence of letters represents the correct order of flats and spells BEAD. Prayer beads are a common accessory implemented in devotions to the Holy Face. The puzzling Mendelssohn sea fragments quoted in Variation XIII  turn out to be a secret musical devotion to the Holy Face of Elgar’s greatest friend.
Variation XIII is clearly not dedicated to Pope Leo XIII who did not pass away until 1903. Covert references to Pope Leo XIII highlight the special connection between a pontiff and Elgar’s not-so-secret friend.  One of the pope’s many titles is the Vicar of Christ, the human representative of Jesus on Earth. It is the famous figure whom the pope personifies that is the intended dedicatee. The name Leo means lion. In the Book of Revelation, Jesus is called the Lion of Judah. There is another explanation for Elgar’s coded references to the presiding pontiff when he composed the Enigma Variations. The name Leo turns up in a pivotal moment in the life of Martin Luther who was excommunicated in 1521 by Pope Leo X. Luther is the composer of the covert Theme to the Enigma Variations, Ein feste Burg (A Mighty Fortress).
The favorite poets of Pope Leo XIII were Dante and Virgil, renowned artists who serve as central protagonists in The Divine Comedy. There are numerous coded allusions to that great poetic work in the Enigma Variations. In May 1879, Pope Leo XIII elevated the famous Anglican priest and convert John Henry Newman, to the rank of cardinal. Elgar’s greatest sacred oratorio was inspired by The Dream of Gerontius, a highly regarded poem composed by Newman in 1865 that was read and underlined by General Gordon before his untimely demise at the Fall of Khartoum. Like much of the British public, Elgar admired Gordon who died a heroic martyr’s death after refusing the Mahdi’s repeated demands to convert to Islam. When presented with General Gordon’s personal Bible in February 1885, Queen Victoria proudly exhibited it in an ornate rock crystal display case in the Grand Corridor of Windsor Castle. Elgar planned to write a Symphony in honor of General Gordon in October 1898 when he abruptly redirected his efforts towards the Enigma Variations.

Elgar’s death in February 1934 marked the end of a man, but not of his music which still reverberates throughout the world’s most prestigious concert halls. His sublime themes also emerge in the soundtracks of epic films like Christopher Nolan’s Dunkirk. The vain efforts of secular academics to minimize and ignore the profound impact of Roman Catholicism on Elgar’s art barred them from detecting and decrypting a symphonic homage to his faith and passion for cryptography. Their unbelief is their undoing, for as the Psalmist warns, “The fool has said in his heart, ‘There is no God.’” The See Holy Face Cipher in Variation XIII is just one example that serves as a remarkable testimony to Elgar’s innermost self that reached its greatest outward expression in The Dream of Gerontius. To learn more concerning the secrets of the Enigma Variations, read my free eBook Elgar’s Enigmas Exposed.
Soli Yah Gloria
Posted by Robert Padgett at 3:37 AM