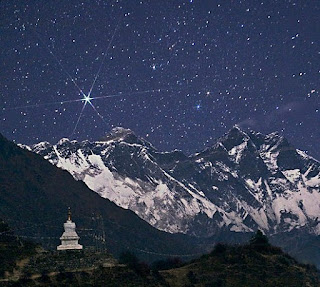 Elgar’s Variations are my Everest,
Elevating song to the starry heights,
Lasting music by one of England’s best,
Guarded by ciphers, a trove of insights,
A labyrinth of dark enigmas unguessed,
Rousing strains of love’s labors lost, now found,
Solved by one willing to endure the test;
Jesus spoke in 'dark sayings' to confound,
Unveiling truth not to the rich and wise,
But rather to fools, the poor, and the lame,
In music Elgar mimics that disguise,
Lifting up in secret his Savior’s name,
Enduring to the end he ran his race,
Emboldened by seeing Christ’s Holy Face.
Robert Wayne Padgett

My fiftieth post commemorates a new milestone: 50,000 page views. This number is understated as some posts range between ten to forty pages in length, yet a view is counted as a single page. A more conservative estimate of real page views is ten to fifteen times greater, or approximately 750,000. Considering the subject is something as esoteric as a British symphony by Edward Elgar, this is by no means a small feat. A Google search of Elgar enigma solution lists my blog as the number one search result, beating out other popular sites like Wikipedia and Answers.com. This favorable condition has been the case for over six months. Understandably, I must be onto something.
On the third of February 2009, I was fortunate enough to discover the covert Principal Theme to Elgar’s ‘Enigma’ Variations: Ein feste Burg by Martin Luther. This extraordinary event took place in my hometown of Pacific Grove precisely on the bicentennial of Felix Mendelssohn’s birth, something I was blissfully unaware of at the time. It was also 110 years after the completion of the Variations in February 1899, and 75 years following Elgar’s death in February 1934. The passage of 75 years after an event is known in the United States as a Diamond Jubilee. In commemoration of this discovery, I composed an acrostic sonnet that spells E ELGAR'S JUBILEE. I chose a sonnet because it has fourteen lines, and similarly, the Enigma Variations has fourteen variations.
The credit for this marvelous discovery belongs to my heavenly Father who graciously answered my fervent prayer, blessing me with the wisdom and endurance needed to surmount the seemingly insurmountable. As this was His gift, I have not sought to profit from it in any way. On the contrary, I prefer to emulate Elgar’s excellent example, for the Variations were his first major noncommissioned work. I seek no reward in this lifetime but prefer to collect my treasure in the next. I suspect Elgar’s motivations in 1898-99 were similar, preferring to follow the great commission rather than toil for one from a publisher hungry for trifles rather than triumphs. Jesus told his followers to do their good works in secret to assure they are not recognized and rewarded by the world, but rather by our heavenly Father. My exhaustive study of the Enigma Variations has produced some fascinating finds as described in my free eBook Elgar’s Enigmas Exposed.
Why was I chosen, of all people, to make these unprecedented discoveries? I never attended conservatory, but then neither did Elgar. On closer analysis, a comparison of Elgar’s life history with my own produces a lengthy list of similar life experiences.Elgar and I share an astonishing number of similar life experiences. Like me, he was:

These similar life experiences have undoubtedly helped in my quest for answers. The scripture says, “God chose the foolish things of the world to shame the wise.” In my case, the Lord could not have chosen a more foolish messenger from the perspective of secular academia. In their eyes, I am a dithering fool, and they have told me so in no uncertain terms. The scripture also assures us that “there is nothing hid, which shall not be manifested." [2] No matter how hard the world strives to hide the truth, it eventually gets out. In the case of Elgar’s Enigma Variations, the waiting lasted 110 years, and now the answers are finally here. To learn more about the secrets behind one of Elgar’s most celebrated symphonic achievements, read my free eBook Elgar’s Enigmas Exposed.