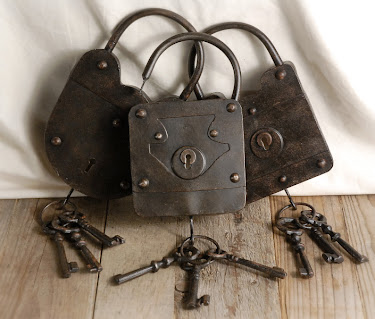 In a palindromic meter he mused,
Anguished, lonely and beset by sorrow.
Moved by the Spirit to sing a new song,
Encouraged by the clarity of friends,
Disavowing all trivialities,
Willing from heart and mind a miracle–
A counterpoint to some popular tune–
Riveting, radical and resplendent;
Devised as a Theme and Variations,
Elgar defied the world to decipher
Love’s mystery shrouded in harmony,
Giving rise to a lock with many keys
About God’s Son whose word is like a sword,
Revered by Gordon as the risen Lord.

Robert Wayne Padgettt
The British romantic composer Edward Elgar was captivated by ciphers, riddles, and wordplay. As Michael Kennedy commented regarding one of England’s greatest composers, Elgar “loved puns, acrostics, secret codes and crossword puzzles.” Understandably, some speculate he inserted various ciphers within the Enigma Variations to decisively resolve a number of seemingly intractable riddles. These include a missing principal Theme on which the entire work is based, a mysterious “dark saying” associated with the Enigma Theme, and a secret friend and inspiration behind Variation XIII. Indeed, there is a certain ironic elegance to answering one set of riddles with yet another. Could there be any music ciphers hidden within the Variations? And if so, where are they and can they be decrypted?
Ciphers are meant to be broken, but they must first be found. A natural place to begin the search is at the beginning with the odd-sounding Enigma Theme. Its title strongly suggests a cipher. The opening six measures are of particular interest due to an oddly placed double bar at the end of measure six. In music a double bar typically signals the end of a section, so the placement of one so close to the beginning is decidedly anomalous. Therefore the most promising starting point to uncover a cipher is opening six measures of the Enigma Theme. To detect the presence of a cipher, the Enigma Theme was subjected to the most basic forms of cryptanalysis. After extensive experimentation and testing, a strict substitution cipher was ruled untenable, a finding reached by other researchers like Dr. Clive McClelland. For an expert cryptographer like Elgar to use such an elementary cipher would be far too obvious and simple. He would not make it so easy, and it is for this reason a more sophisticated cipher should be anticipated.
But what kind of cipher? Another form of basic cryptanalysis was next attempted. What if all of the notes in the first six measures were added up for each active instrumental part and converted into the corresponding letter of the alphabet? In pursuit of this novel approach, all notes performed by each part were summed over the first six measures of the Enigma Theme. Four instrumental parts are active in these opening measures: The first and second violins, violas and cellos. The first violin part has the largest number with 24 notes. The second violins have the second highest with 17 notes. The violas have the third highest with 15 notes, and the cellos with only 12 notes. This trend is remarkable because the lowest number of notes corresponds to the lowest instrument of the string quartet, and this graduated pattern is consistent with each of the other string parts. The next step required converting these note totals into equivalent letters from the alphabet using a number-to-letter key (1 = A, 2 = B, 3 = C, etc.). The conversion of these note sums is shown below in alphabetical order:

The results in Figure 1 yield the plain text solution “LOQX”. A phonetic reading of “LOQX” produces locks. Elgar's reliance on phonetic spellings is thoroughly documented by his personal correspondence, so such an unconventional spelling is not unprecedented. Ultimately it bears one of the chief hallmarks of Elgar's literary style, something Eric Sams dubbed trick spellings. 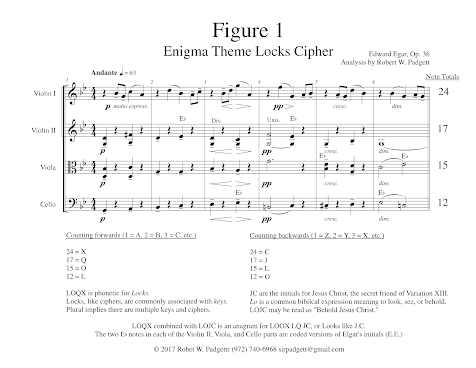 Why locks? Locks are opened by keys, and so too are ciphers. Speaking of keys, the Enigma Theme is performed in the minor and major modes of G. The accidentals for G minor (B-flat and E-flat) and G major (F-sharp) form an anagram of the initials for Ein feste Burg. That is hardly a coincidence. Often the key to a lock is a combination of numbers. The term “LOQX” hints at is the existence of multiple keys and by extension, ciphers. Moreover, these codes are not necessarily constrained to the Enigma Theme. Reading “LOQX” as locks is justified because further research revealed the existence of multiple ciphers in both the Enigma Theme and Variation XIII. The most ingenious of these is Elgar's Music Box Cipher found in the first six measures of the Enigma Theme. The term lock is commonly paired with box to form lockbox, so “LOQX” indirectly alludes to the nature of Elgar’s box cipher. A variant of the Polybius square, a box cipher uses pairs of digits as the basis for the cipher key. In this case, Elgar uses melody and bass note pairings to encode plain text solution letters in a cipher table that resembles a checkerboard grid with rows and columns of boxes. Incredibly this box cipher produces a “dark saying” confirming the identity of the hidden friend (Jesus). Treated as an anagram, the letters from Elgar’s “dark saying” may be reshuffled to spell the complete 24-letter title of the unstated Principal Theme. A second cipher in the Enigma Theme is the “I AM” Cipher. The third, of course, is the “Locks” Cipher outlined here.
“LOQX” also sounds like lochs. In Scottish and Gaelic, a loch is a lake or sea inlet. Reading “LOQX” as lochs is intriguing for Elgar sonically portrays the sea in Variation XIII with quotations from Mendelssohn’s concert overture Calm Sea and Prosperous Voyage. Read as lochs, “LOQX” suggests the Mendelssohn fragments harbor ciphers. Further research revealed there are multiple ciphers embedded in those seemingly extraneous fragments: The “FAE” Cipher, Mendelssohn Cipher, and Romanza Cipher. These ciphers confirm the name of the unstated Principal Theme, the identity of the secret friend, and a major source of inspiration behind the Variations – the Turin Shroud. Amazingly both the “FAE” and Mendelssohn ciphers use the keys of the Mendelssohn fragments as part of their respective codes. Akin to ciphers, locks are typically opened with keys.
Revisiting the Locks Cipher, when the same note totals are applied to the alphabet in reverse order (i.e., 1 = Z, 2 = Y, 3 = X, etc.), the plain text result is “CJLO”. The number-to-letter conversion in reverse alphabetical order is shown below:

When treated as an anagram, these letters spell “LOJC.” Lo is a common biblical term meaning to look, see or behold. Notice that see sounds just like sea. Lo is often associated with behold as in the phrase “Lo and behold.” The original sketch of Variation XIII was designated with a solitary capital“L”, a movement portraying the sea. Alternatively, Lo may be viewed as a clue encouraging closer inspection of movement “L” symbolizing the ocean. “JC” are the initials for Elgar’s secret friend, Jesus Christ. These letters are covertly formed by the Roman numerals of his variation (XIII). X represents the number ten, and J is the tenth letter of the alphabet. III stands for three, and C is the third letter. Observe the letter C also sounds like see and sea. A popular miracle ascribed to Jesus is when he walked on water at the Sea of Galilee, which in reality is a lake (loch). Given these facts, “LOJC” may credibly be interpreted as the phrase “Behold Jesus Christ.”
Decoding “LOJC” as the expression “Behold Jesus Christ” is supported by the fact Elgar names the famous burial cloth of Christ – the Turin Shroud – in the Romanza Cipher. Appropriately enough that cipher is found within the same movement secretly dedicated to Jesus, Variation XIII. The timing is right because five months before Elgar began openly working on his Variations, Secondo Pia took the very first official photograph of the Turin Shroud. When viewed as a photographic negative, it vividly revealed for the first time a positive image of what many believe to be the crucified body of Jesus Christ. Pia made this historic discovery in a dark room used to develop photographic plates. Is this possibly one reason for Elgar's strangely worded program note mentioning a dark saying? For devout Roman Catholics like Elgar, Pia's photographic negative of the Turin Shroud permitted them for the first time to behold the face and body of their Lord and Savior. No wonder Elgar concluded the original score of the Variations with a paraphrase from Tasso’s Jerusalem Delivered. When the Shroud arrived in Turin in 1578, the guest of honor was none other than Europe’s most celebrated poet, Torquato Tasso, who publicly venerated that holy relic.
There is yet another reason to suspect the plain text solution letters produced by the Locks Cipher point to the Turin Shroud. When treated as an anagram, those letters (LOQX & LOJC) spell “LOOX LQ JC”. This is the phonetic equivalent of the phrase “Looks like JC”. What looks like Jesus Christ? For many devout Roman Catholics like Elgar, the answer to that question is the Turin Shroud. There are a host of allusions to that sacred cloth within the Enigma Variations, a pattern continued by Elgar's Enigma Locks Cipher.
In an incredible twist, the numbers produced by the Enigma “Locks” Cipher (24, 17, 15 and 12) are intimately linked to the Enigma Variations. The title of the unstated principal Theme is twenty-four letters in length: Ein feste Burg ist unser Gott. The Enigma Theme consists of seventeen measures plus a two bar bridge. The entire work is in fifteen movements. Remarkably, twelve friends are portrayed in the work excluding the composer (E. D. U.) and his wife (C. A. E.). With so many numeric parallels, one is forced to concede the numbers underlying the “Locks” Cipher do not appear to be coincidental, but rather the product of deliberation and design. As noted in Figure 1, the Locks Cipher is authenticated by three sets of the composer's initials embedded in the parts for the second violins, violas, and cellos. Elgar incorporated his initials into a variety of ciphers in the Enigma Variations. That such an elementary cipher escaped notice until now is nothing short of astonishing, proving once again Edgar Allan Poe’s assertion that the best way to hide something is in plain view. To learn more about the secrets of the Enigma Variations, read my free eBook Elgar’s Enigmas Exposed.
Soli Yah Gloria

Posted by Robert Padgett at 9:18 AM