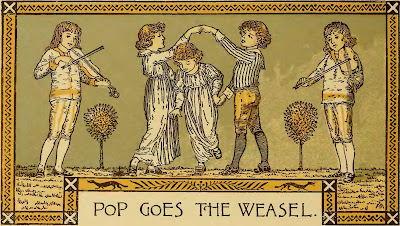 I can suck melancholy out of a song as a weasel sucks eggs.

In 1977 Dennis Whitten proposed Pop Goes the Weasel as the hidden theme to Elgar’s Enigma Variations. Could that ordinary folk song be the secretive Theme to the Enigma Variations? A credible case can only be made if it can be shown that Pop Goes the Weasel effectively satisfies six conditions Elgar gave defining the relationship between the Enigma Variations and the covert principal Theme. Secured directly from Elgar’s recorded words by multiple, independent, unimpeachable sources, those six conditions are:
Any theme that violates just one of those six conditions must be ruled out as invalid. The first and foremost test is to play a given melody “through and over” the Enigma Theme to assess whether there is a credible contrapuntal and horizontal fit. Before attempting this, it is first necessary to adapt a candidate theme to mirror the Enigma Theme's shifts between the major and minor modes of G. These modulations are required by the structure of the Enigma Theme that begins in G minor (measures 1-6), continues in G major (measures 7-10), returns to G minor (measures 11-16), cadences in G major (measure 17), and modulates again back to G minor in the bridge leading to Variation I (measures 18-19). Even when adjusting for these modulations, Pop Goes the Weasel flunks the test. 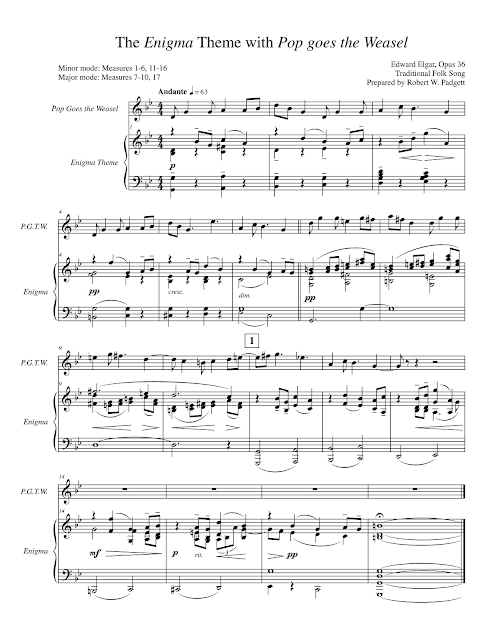 This melodic mapping demonstrates that Pop Goes the Weasel does not present a credible counterpoint to the Enigma Theme. Strike one. It finishes prematurely seven bars before the Enigma Theme concludes. Strike two. More fatally, it has never been shown how Pop Goes the Weasel plays “through and over” the remaining movements, a requirement Elgar specifically mentions in the original 1899 program note. Strike three. The failure to satisfy these and other key conditions permit one inescapable conclusion: Pop Goes the Weasel could not possibly be the covert principal Theme to the Enigma Variations.
The only theme that successfully satisfies all of Elgar’s conditions is Ein feste Burg (A Mighty Fortress) by the German Reformer Martin Luther. That well-known hymn successfully plays one complete cycle “through and over” the Enigma Theme, establishing an uncanny horizontal fit. A precise vertical alignment between the two melodies illustrates Elgar's unique treatment of Ein feste Burg in an augmented form as a retrograde counterpoint. This unconventional method accounts for the profound difficulty in detecting a contrapuntal fit because one typically plays the beginning of a prospective melody over the beginning of the Enigma Theme. Such a predictable approach produces a mismatch, throwing off researchers even when the right melody is assessed.
The case for Ein feste Burg as the covert principal Theme to the Enigma Variations is extensive and persuasive. Confirmation that Ein feste Burg is the hidden theme is given by a diverse range of music ciphers in the Enigma Theme and Variation XIII. Within the Enigma Theme is concealed a Music Box Cipher, Elgar’s “dark saying” linked to the Enigma mentioned in the original 1899 program note. Incredibly, Elgar did not take his secret to the grave, but rather enciphered the answer in the orchestral score. When discovered, the decrypted answer would remain unguessed just as Elgar prescribed. He even went so far as to encode the initials for the hidden melody in the Enigma Theme which modulates between the minor and major modes of G. The accidentals for those two keys are E-flat, F-sharp, and B-flat. Remarkably, the letters of those accidentals furnish the initials for Ein feste Burg.
The odd nickname for August Jaeger’s movement (Nimrod) is linked to the title A Mighty Fortress by one of Elgar’s favorite pastimes, wordplay. When he gave a copy of Longfellow’s novel Hyperion to the conductor Hans Richter following the premiere, Elgar literally gave away the answer. No wonder he suspected the solution would soon be found. Even the wrong date on the original score is a revealing clue since it falls on the anniversary of Luther’s death. According to a scale degrees cipher within the Mendelssohn fragments, the missing initials for Variation XIII (✡ ✡ ✡) are “EFB”, the initials for Ein feste Burg. The mapping of Ein feste Burg over Nimrod is so self-evident that the melodic solution to Elgar's Enigma Variations is as plain a pikestaff.
If he were alive today, Elgar's response to Cooper’s solution would undoubtedly be, “No, nothing like it. Pop Goes the Weasel does not fit in the least.” To learn more about the secrets of the Enigma Variations, read my eBook Elgar’s Enigmas Exposed. Like my heavenly Father’s gift of salvation and forgiveness, the price is free.
Soli Yah Gloria