Corresponding Ciphers in the 1899 Program Note and Enigma Theme 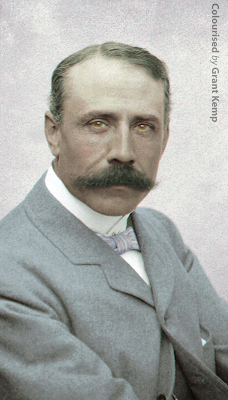 Robert J. Buckley in his 1905 biography of Sir Edward Elgar
It is distinctly anomalous that in his 1899 program note about an orchestral work dedicated to his friends, Elgar only furnishes the name of a foreign playwright and stranger: Maeterlinck. That surname is followed by the French titles from two of his plays, L’Intruse (The Intruder) and Les sept Princesses (The Seven Princesses). In the program note, the phrase “Maeterlinck’s ‘L’Intruse’ and ‘Les sept Princesses’” is set apart by two long dashes. Elgar was an expert in cryptography, the discipline of encoding and decoding secret messages. Could his conspicuous Maeterlinck phrase be a cipher?
The unique first initials from Elgar’s Maeterlinck phrase are “MLaSP” (Maeterlinck’s ‘L’Intruse’ and ‘Les sept Princesses’), a reverse acrostic anagram of PSALM. This phrase has precisely 46 characters, a figure that alludes to Psalm 46.
That famous chapter is known as “Luther’s Psalm” because it inspired his greatest hymn, “Ein feste Burg” (A Mighty Fortress). This Maeterlinck cryptogram implicates Luther’s most famous hymn as the covert principal Theme to the Enigma Variations. The remaining initials “IL” (Maeterlinck’s ‘L’Intruse’ and ‘Les sept Princesses’) produce the Roman numerals for 49. That number may be interpolated as a coded form of 46 because the glyph for 9 is identical to 6 in an inverted form.
There is a second layer to this Maeterlinck Cipher. The German initials for the secret melody (E.F.B.) are ingeniously enciphered by the nationalities associated with Elgar’s program note. Elgar is an English composer whose explanatory note for the Enigma Variations is in his native language. In his remarks, he refers to the Belgian playwright Maeterlinck and the French titles of two plays. These three nationalities (English, French, and Belgian) are an acrostic anagram of the initials for the covert Theme: Ein feste Burg. In a remarkable display of cryptography, the phrase “Maeterlinck’s ‘L’Intruse’ and ‘Les sept Princesses’” efficiently encodes Psalm 46 and the initials for the secret melody. These two overlapping ciphers provide a set of mutually reinforcing solutions in which one affirms and authenticates the other.
A related cryptogram is formed by seven discrete performance directions in the first bar of the Enigma Theme’s orchestral score. Those seven terms are Andante, legato e sostenuto, molto express., and Piano). The first letters of these seven Italian words are an acrostic anagram of “EE’s Psalm.” The dual Es are the initials for Edward Elgar.
Elgar indicated the tempo for the Enigma Theme by writing a quarter note followed by an equals sign (=) and the number 63. This adds four more characters to the seven other performance directions in the Enigma Theme’s opening bar for a grand total of 46 characters. That precise sum implicates Psalm 46. 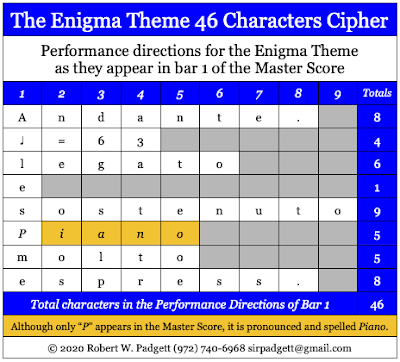 The Enigma Theme is set in the parallel keys of G minor and G major. The accidentals for those key signatures are B-flat, E-flat, and F-sharp. The letters of those accidentals (B, E, and F) are an anagram of the initials for Ein feste Burg. The keys of the Enigma Theme elegantly unlock Elgar's contrapuntal strongbox to reveal the initials of the covert principal Theme. 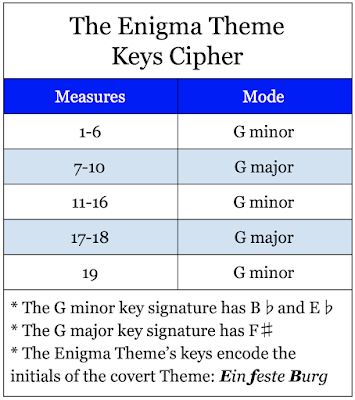 There are some extraordinary parallels between the Program Note Maeterlinck Cipher and the Enigma Theme’s Performance Directions Cipher. Both employ acrostic anagrams to encode the word “Psalm” and link it to character totals adding up to 46. The title of the covert principal Theme to the Enigma Variations comes from the first line of Psalm 46: A Mighty Fortress is our God. The initials for Ein feste Burg are enciphered as acrostic anagrams by the nationalities in the 1899 Program Note (English, French, and Belgian) and the accidentals for the parallel key signatures of the Enigma Theme (E-flat, F-sharp, and B-flat). The matching decryptions of these two ciphers via acrostic anagrams defies a fortuitous origin. The precision and ingenuity of these two multilayered ciphers illustrate Elgar’s talent for cryptography, a neglected field of study deserving of more rigorous investigation and analysis. To learn more about the secrets of the Enigma Variations, read my free eBook Elgar’s Enigmas Exposed.

Posted by Robert Padgett at 8:47 AM