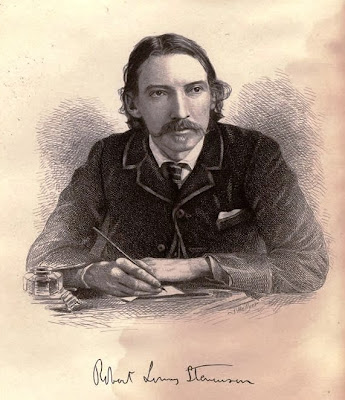 Don’t judge each day by the harvest you reap, but by the seeds that you plant.

The digits for the number 24 are cleverly encoded throughout the opening Theme of the Enigma Variations by Edward Elgar. The first instance occurs in measure 1 where two bass note chords on beats 1 and 3 accompany four melody notes played on beats 2 through 4. The two bass notes and four melody notes are the lowest and highest notes in the score respectively, and together in measure 1 they sequentially encode the digits for 24. The bass notes start first, identifying the number 2, and the melody notes that follow point to the number 4. This pattern is reprised in measures 2 through 6 – the A section of the Enigma Theme’s ABAC structure (with section C forming the bridge in bars 18 and 19) – and again in measures 11 through 16 with the recapitulation of the A section. The fact each melodic fragment begins and ends on beats 2 and 4 hints at this special number. 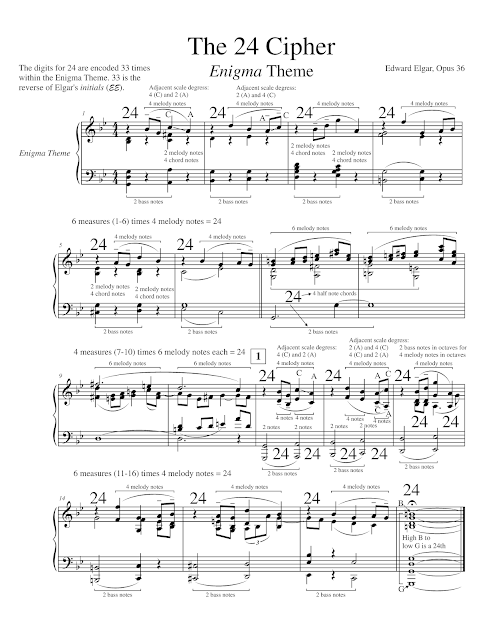 There is more in measure 1 that points to the number 24 than just the note totals for the melody and bass lines. On beats 3 and 4 the melody notes are C falling by a minor third to A. The scale degrees for these two notes are 4 and 2 respectively, the reverse of 24. In measure 2 those same melody notes recur in reverse order on beat 4 with A rising by a minor third back to C. These melody notes are played contiguously in measures 1 and 2, and again in 11 and 12. In measure 12 they not only occur in the melody line as A and C, but also concurrently in the countermelody as C and A. In all, there are five instances of contiguous melody or countermelody notes in the Enigma Theme with scale degrees that provide the digits for the number 24. When Elgar recapitulates the opening six measures, he does so with added emphasis on the numbers 2 and 4. In measure 11 there are 2 bass notes for every 4 notes in the Treble staff. A similar pattern occurs in bar 13 with 2 bass notes played in octaves for every 4 melody notes which are also in octaves. In measure 6 there is an unusually placed double bar marking off the end of section A, the opening G minor section of the Enigma Theme. The sum of the melody notes in Section A equals 24. The same holds true for its modified recapitulation in measures 11 through 16.
So far we have observed multiple allusions to the number 24 in the G minor A sections of the Enigma Theme, namely measures 1 through 6 and 11 through 16. Are there any coded references to 24 in the G major sections found in measures 7 through 11 or 17? Measures 7 through 10 represent the B section of the Enigma Theme’s ABA ternary form, and it holds at least two allusions to the number 24. The first hinges on the total number of melody notes. There are 6 melody notes per bar in measures 7 through 11, and 6 notes multiplied by 4 bars equals 24. This mirrors the precise number of melody notes in both A sections. The second instance is in measures 7 and 8 where there are 2 bass notes with 4 half-note chords played over them. In measure 17 the Enigma Theme cadences on a Tierce de Picardie, a G major chord that contrasts with the more prevalent minor mode of the A sections. It should be observed the interval between the low G and the high B of that final chord is a major third plus three octaves, a span of a twenty-fourth, also known as a triple compound third.
Why would Elgar place such a special emphasis on the number 24 in the Enigma Theme? That number relates directly to Western music because there are 24 major and minor keys excluding enharmonic equivalents. The number 24 may be viewed as a symbol of the circle of fifths, a summary of the major and minor scale modes. That the Enigma Theme repeatedly modulates between the minor and major modes of G invites this interpretation. The circle of fifths is also suggested by the fact Pi (a mathematical constant pertaining to circles) is encoded in the Enigma Theme’s first and eleventh measures.
Should the meaning of the number 24 be confined to this one perspective? There is no reason to limit our analysis to the strictly musical since the number 24 is multivalent. In theology – a subject in which Elgar was well versed – that particular number turns up a number of times. For instance, there are 24 books in the Hebrew Tanakh, the Masoretic Text of the Bible. In the Temple, there were 24 courses of Priests and singers. The number 24 also represents the sum of the Twelve Tribes of Israel and the Twelve Apostles. In Revelation 4 there are 24 Elders seated around the Throne of God. As these examples show, the number 24 is theologically nuanced with a range of connotations relevant to the Enigma Variations, especially since Variation XIII is dedicated in secret to Jesus.
There is a distinct association between ciphers and the number 24. In cryptography, the English alphabet of 26 letters is commonly paired down to 24 by combining two letters, usually i and j. In Elgar’s personal library there is a collection of four articles called Secrets in Cipher from The Pall Mall Gazette published in 1896. They provide a general history of cryptography from ancient times to Elgar’s era. On page 459 there is a description of a music cipher used by King George III. The cipher key consists of 12 ascending quarter notes and 12 descending eighth notes from a scale, features that pose at least two parallels with the Enigma Theme. First, the Enigma Theme’s melody is composed of quarter and eighth notes. Second, there are 24 melody notes in each of the A and B sections of the Enigma Theme’s ternary form. The similarities between the Enigma Theme and the music cipher described in The Pall Mall Gazette are remarkable, furnishing credible evidence for the existence of a music cipher. This conclusion is bolstered by the discovery of a trove of music ciphers within the Enigma Variations.

There is one gigantic reason why Elgar would stress the number 24 in the Enigma Theme. It is the exact number of letters in the original German title of the covert principal Theme: Ein feste Burg ist unser Gott (A Mighty Fortress is our God). Why would he encode it 33 times? That number mirrors Elgar’s initials (EE), so it may be reasonably understood as the composer’s stealth imprimatur. That is certainly suggested by the discovery of over 70 ciphers within the Enigma Variations. The 24 Cipher is not the only cryptogram initials by Elgar, for he also did so with his Psalms Cipher placed in measure 1 of the Enigma Theme. He takes it one step further with the Music Box Cipher in measures 1 through 6 of the Enigma Theme by spelling out his complete last name. In measure 1 the number 33 is intimated by the two broken thirds in the melody line. In measure 17 that same number is suggested by the triple compound third formed between the highest and lowest notes of the G major chord. 33 is not only the numerological equivalent of Elgar’s initials – it is also the age of Jesus at the time of his crucifixion. The “Locks”, “I AM”, Pi-C, and Music Box ciphers contain coded references to Christ, and these are all located within the Enigma Theme. Therefore the number 33 may be plausibly understood as an allusion to Elgar’s secret friend portrayed in Variation XIII. To learn more about the secrets behind one of Elgar’s most celebrated symphonic achievements, read my free eBook Elgar’s Enigmas Exposed.
Soli Yah Gloria
Posted by Robert Padgett at 6:22 AM