Elgar and his Heroes: General Gordon

Tell me about your heroes, then I will tell you about yourself

In a palindromic meter he mused,
Anguished, lonely, and beset by sorrow,
Moved by the Spirit to sing a new song,
Encouraged by the clarity of friends,
Disavowing all trivialities,
Willing from heart and mind a miracle –
A counterpoint to some popular tune –
Riveting, radical, and resplendent,
Devised as a theme and variations,
Elgar defied the world to decipher
Love’s mystery shrouded in harmony,
Giving rise to a lock with many keys
About God’s Son whose word is like a sword,
Revered by Gordon as the risen Lord.

Robert Wayne Padgett
The Gordon Symphony
In October 1898 Edward Elgar was not openly planning to compose a set of orchestral variations. Instead, he had a very different project in mind: A symphony in honor of the fallen hero of the Siege of Khartoum, General Charles Gordon. Up to that time, Elgar had never composed an extended symphonic work for orchestra alone, so this represented an escalation in his artistic ambitions. He proposed the “Gordon” Symphony in anticipation of a premiere at the Worcester Three Choirs Festival in September 1899. The day before beginning work on the Enigma Variations (October 20, 1898), he wrote to his friend August Jaeger:

‘Gordon Sym.’ I like this idee [sic] but my dear man why should I try? . . . I have to earn money somehow & it’s no good trying this sort of thing even for a ‘living wage’ & your firm wouldn’t give ₤5 for it – I tell you I am sick of it all: why can’t I be encouraged to do decent stuff & not hounded into triviality.[1]

Despite struggling with mixed feelings, he continued to ponder and plan his first symphony. Shortly after beginning the Enigma Variations, he still talked about the “Gordon” Symphony.[2] For instance, on November 11, 1898, he wrote, “Now as to Gordon: the thing possesses me, but I can’t write it down yet.”[3] It is significant that at the same time Elgar was composing his first extended symphonic work – the Enigma Variations – he was openly discussing his Gordon Symphony. Could the two projects be interconnected in some way? And if so, how? Before answering these questions, let us first familiarize ourselves with one of Elgar's heroes – General Gordon.
General Gordon
Who was General Gordon and why of all people would Elgar turn to him as the inspiration for his first major symphonic work? He certainly exercised a considerable influence over Elgar. Consider the following examples. When Gordon was on campaign, he placed a flag on his tent to show that he should not be disturbed. Elgar adopted the same practice when composing in a tent erected outside his home during the warm summer months. Elgar was well known for maintaining a military bearing, emulating respected military figures like his wife’s father (Major-General Sir Henry Gee Roberts), and of course, General Gordon.
Sending messages in secret code is standard operating procedure among military leaders. One well-known from the history of cryptography is Julius Caesar and his Caesar cipher. Consistent with his imitation of military men, Elgar was deeply interested in secret codes and puzzles. In his correspondence, Gordon liberally peppered his prose with the Latin acronym D.V. (Deo Volente), an apotropaic that Elgar also used in his letters. In the Enigma Variations, Elgar cryptically incorporates these initials in his musical self-portrait (E. D. U.), the Finale. This is the case because the Latin letter U is equivalent of V. It is exquisitely appropriate this veiled allusion to Gordon occurs in the movement that sounds like a military march. Even more intriguing is the Finale is in the key of G major, an illuminating coincidence since Gordon was a Major-General at the time of his death.
A surprising conclusion that can be drawn from the fact Elgar talked about Gordon in connection with a symphonic work immediately before, during, and after composing the Enigma Variations is that both works are, in certain respects, one and the same. As evidence of this possibility, the initials for General Charles George Gordon are formed at rehearsal 62 of Variation XIV as shown below: 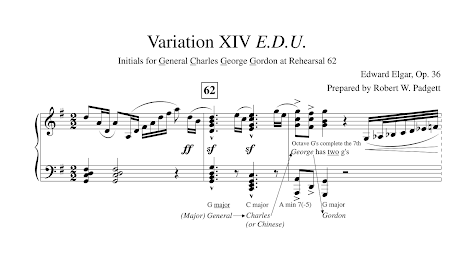 This musical cryptogram is highly reminiscent of Elgar's Allegretto on GEDGE (1885), a work based on the last name of some students who were sisters. The veiled reference to General Gordon in the most martial sounding of the Enigma Variations makes complete sense and reaffirms Elgar's public quasi-military persona.
Elgar’s greatest source of identification with Gordon was most assuredly his unwavering Christian faith. Gordon was an Anglican warrior-evangelist who died the death of martyr-hero at the siege of Khartoum in 1885.[4] He was also Queen Victoria’s favorite General. Following his tragic death mourned by not just one nation, but an Empire spanning the globe, his sister Augusta “presented the Queen with her brother’s Bible, which was placed in one of the corridors at Windsor, open, on a white satin cushion, and enclosed in a crystal case.” Gordon quotes the Bible extensively in his letters, and so does Elgar in his oratorios: The Light of Life, The Saga of King Olaf, The Dream of Gerontius, The Apostles, and The Kingdom. Gordon dedicated his life to God, and willingly sacrificed it rather than abandon his faith. Elgar dedicated the majority of his works to God with the initials A. M. D. G., and willingly endured decades of obscurity before being discovered for a talent he always enjoyed. Finally, Gordon encouraged a more ecumenical form of Christianity, a path that Elgar also embraced in later life.
Elgar, Gordon and the Bible
The most influential book in Gordon's life was undoubtedly the Bible, and the same could be said concerning Elgar. For the vast majority of his oratorios, the Bible was Elgar's libretto. In Gordon’s case, it was the only book that mattered. The Bible is the most published and quoted book in history, so Gordon's lofty opinion is not without merit. In 1886, Henry William Gordon published a biography about his famous brother. In the introduction he states:

[Gordon] always took his stand upon the Bible. In distress of mind or in times of hesitation, he turned to it for advice. His Bible was to him his friend and companion in the time of trouble.[5]

Given Elgar’s desire to emulate General Gordon, it is not unreasonable to conclude he finally recognized a symphony in Gordon's honor would contradict everything the General believed in. By April 20, 1899, Elgar abandoned the Gordon Symphony and likely did so after coming to terms with Gordon's austerity and revulsion for public recognition. What greater contradiction could he contrive than to overtly compose a symphony in Gordon's honor? That would be the last thing Gordon would want, and more importantly, condone. The best way for Elgar to honor Gordon would not be to praise the General publicly with a symphony, but rather to emulate his example by glorifying Gordon's spiritual Commander In Chief in secret.
Just as Gordon practiced his charitable acts in secret, so too Elgar found it fitting to honor Gordon’s God in secret. Ultimately this is what he did with the Enigma Variations. In his first great symphonic work, Elgar secretly honors Gordon's Lord, the God who hides himself, using a hidden theme, a hidden message and a hidden friend to all who will receive Him. These three hidden aspects of the Enigma Variations form a trinity of mystery. Elgar's choice for the unstated Principal Theme – Ein feste Burg – is readily associated with Gordon because he was Anglican, and hence a Protestant. A Mighty Fortress was the battle hymn of the Reformation. Gordon may also be associated with Ein feste Burg because of its military connotations as a war hymn performed on the eve of battle and to commemorate military victories. An excellent example of the latter is Wagner's Kaiser March, a work performed in England at the Coronations of 1902 and 1911.
A “Mighty” Coincidence
On October 21, 1898 – the day he first performed the Enigma Theme for his wife – Elgar wrote, “‘Gordon’ simmereth mighty pleasantly in my (brain) pan & will no doubt boil over one day.”[10] Elgar's use of the word mighty on that day of days is an illuminating slip of the pen. Why? Because the covert Principal Theme to his Enigma Variations is Ein feste Burg – A Mighty Fortress. To learn more about the secrets of the Enigma Variations, read my eBook Elgar’s Enigmas Exposed. Like my heavenly Father’s gift of salvation, the price is free.
Soli Yah Gloria 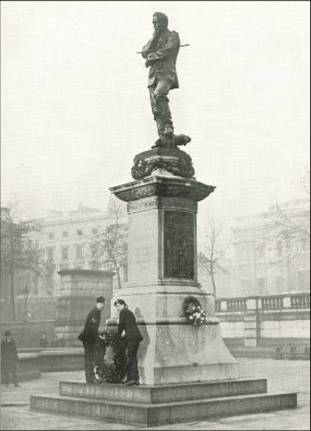