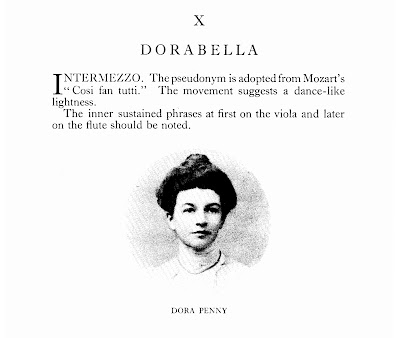 Looking through the music and counting up how many of the ‘Variations’ I knew and how many I had only heard of, I remember how puzzled I had been by seeing ‘E. D. U.’ over the Finale.

‘Well, I should have thought you’d know that.’

But I was quite stupid and said, ‘I don’t know any friend of yours whose name begins with “U”.’

As he put the slightest possible emphasis on ‘begin’ my wits at last woke up.

‘Oh! of course,’ I said rather shyly, knowing that ‘Edu’ was what the Lady called him-and no one else, so far as I knew. ‘It’s you.’

‘That’s a secret. Will you remember?’

Edward Elgar: Memories of a Variation

Edward Elgar produced his impenetrable Dorabella Cipher in July 1897. Created shortly after celebrating his fortieth birthday, Elgar’s coded missive is addressed to “Miss [Dora] Penny”, a family friend then twenty-three years old and seventeen years his junior. The origin of the cipher’s name is Variation X from the Enigma Variations (1899), a movement dedicated to Dora Penny that has the nickname “Dorabella” as its title. Elgar based that pseudonym on a character from the opera Così fan tutte by Wolfgang Amadeus Mozart.
The Dorabella Cipher consists of 87 curlicue symbols arranged in three rows of varying uneven character lengths followed by a fourth row giving the date “July 14 [18]97”.

In his book Unsolved!, mathematics professor Craig P. Bauer contends the Dorabella Cipher exhibits the traits of a simple monoalphabetic substitution cipher (MASC) with spaces between words stripped out. Ancient Greek and Classical Latin text lack spaces between words, a practice referred to as scriptio continua (continuous writing). Bauer further observes that none of the standard techniques for solving such an elementary cryptogram yield any comprehensible results. He briefly describes and dismisses purported solutions by Eric Sams, Tony Gaffney, and Tim S. Roberts. He theorizes the Dorabella Cipher has not yet been solved because Elgar’s system of encipherment must be “something more complicated.” Bauer’s assessment is cogent and correct.
There is some debate regarding four conspicuous dotes in the Dorabella Cipher. Are they errant ink droplets or something more deliberate? The first dot appears above the sixth ciphertext in row three. Three other dots appear in the fourth row next to the numbers 1, 4, and 7. Based on my original research, those dots ingeniously encipher the abbreviation “AMDG” that represents the Latin motto of the Society of Jesus, “Ad Majórem Dei Glóriam” (For the greater glory of God).
The first dot above the ciphertext symbol in the third row pinpoints the glyph for the letter m. The application of an elementary number-to-letter key (1 = A, 2 = B, 3 = C, etc.) to the dotted numbers in the date generates the letters A, D, and G. The combination of these letters set apart by the four dots permits the anagram “A. M. D. G.” Remarkably, the four dots conveniently furnish the periods needed to segregate those initials to complete dedication. This subcode is labeled the Dorabella Dots Dedication Cipher.

Such a Catholic motto is consistent with Elgar’s psychological profile as he applied that particular dedication to other projects. He penned “A. M. D. G.” as a dedication for his major sacred works such as The Dream of Gerontius (1900), The Apostles (1903), and The Kingdom (1906). Below is a facsimile of the title page from Gerontius with “A. M. D. G.” writ large at the top: 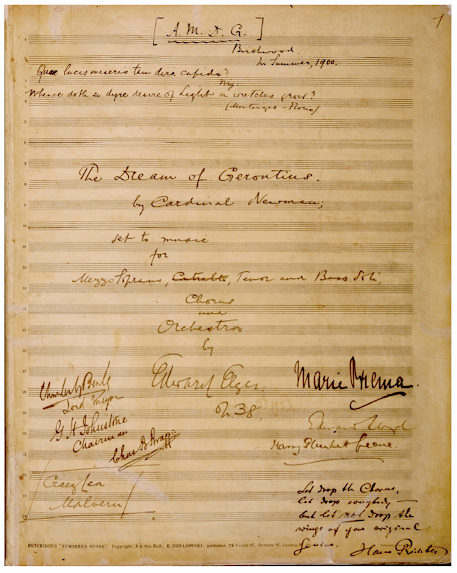 There is a Christian element to the Dorabella Cipher as the recipient was the daughter of the Anglican Rector Alfred B. Penny. He served as a missionary and reported on his mission in his 1887 book Ten Years in Melanesia. Encrypting a Jesuit motto in a message to an Anglican Rector’s daughter presents a delectable degree of humor and reflects Elgar’s penchant for japery. 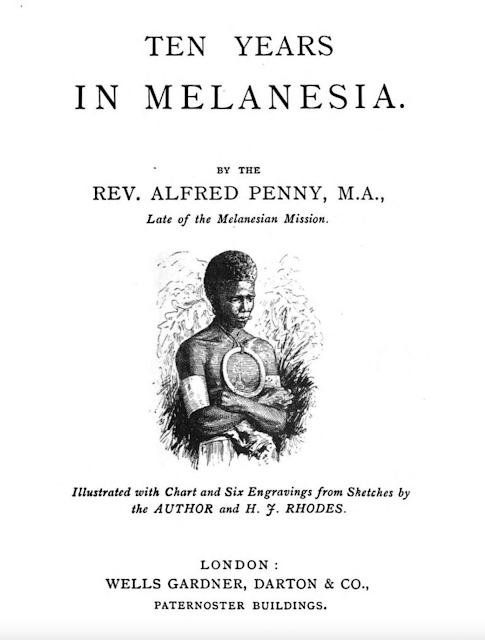 The dot above the sixth character in row three of the ciphertext marks more than a glyph that replicates the letter m. It pinpoints a well-known pseudonym for Elgar. Before sharing this tantalizing discovery, it is first necessary to consult the key to decoding Elgar’s confounding cast of coded characters preserved in one of his surviving notebooks. A facsimile of that cipher key is exhibited below: 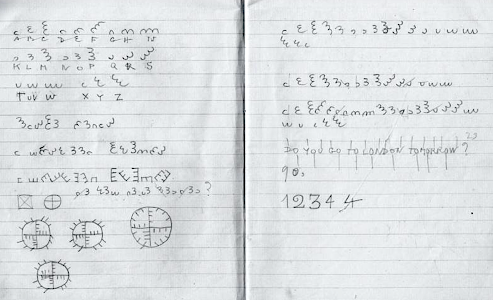 Elgar devised three distinct glyphs using the lower case c as the primary building block. It is not difficult to ascertain his motive for selecting that particular letter as c is the initial for cipher and cryptogram. With his three distinct curlicue characters constructed from one, two, and three stacked cs, Elgar systematically arranged them into eight groups using different angles and orientations to generate 24 alphabetic avatars. Elgar assigned the alphabet’s 26 letters to these 24 characters by merging the letters i with j and u with v. Conflating similar glyphs is a standard practice in cryptography.
Relying on Elgar’s notebook key, the raw decryption of the character below the dot in row three is the letter E. A single dot in International Morse Code is also E. The following two characters encode the letters D and U/V. Remarkably, the small dot above the ciphertext in the third row tags the text sequence “E D U”. “Edoo” is a pet name for Elgar coined by his wife, Alice. She conceived of this nickname using the first three letters of the German version of her husband’s forename, Eduard. Elgar assigned this pseudonym to his musical self-portrait in the Enigma Variations (1899), the martial Finale with the title “E. D. U.” Dora Penny was familiar with this pet name as she spent time with the Elgar family and heard Alice call her husband “Edoo.” This fragmentary decryption confirms that the Dorabella Dots Dedication Cipher is covertly initialed by its author. The discovery of Elgar’s nickname is consistent with other cryptograms in the Enigma Variations that are similarly tagged by his initials. One example is the performance directions in bar 1 of the Enigma Theme that produce the acrostic anagram “EE’s Psalm”. 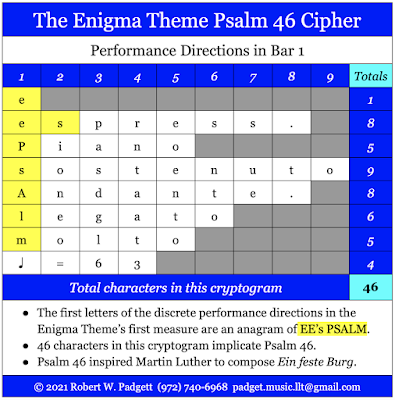 There are precisely 46 characters in this Performance Directions Acrostic Anagram Cipher, a sum that implicates Psalm 46. That chapter inspired the German reformer Martin Luther to compose his rousing hymn Ein feste Burg (A Mighty Fortress). A multifaceted array of evidence confirms that the battle hymn of the German Reformation is the covert Principal Theme to the Enigma Variations.
Why would Elgar employ dots to encode a flagrantly Catholic dedication in a secret message to a young Anglican friend? The answer lies with another family nickname for Elgar’s youngest sister, Ellen. During her teenage years, she took a vow of chastity and announced her devout intention to become a nun. In 1879, she “enrolled in the sodality of the Children of Mary, a pious association established by the Jesuits.” Her plans were delayed as she served as the primary caregiver for their ailing mother. Following the death of Elgar’s mother in 1902, Ellen was free to join St. Mary’s Convent in Stroud and was eventually rose to become Mother Superior of that order. How is Elgar’s youngest sister Ellen connected to the dots in the Dorabella Cipher and the Jesuit motto they encode? Nobody called her Ellen because the family gave her the nickname Dot.
Elgar composed a short organ prelude in 1906 for the nuns of St. Mary’s Convent and gave it the title For Dot’s Nuns. In bars 11-14, Elgar subtly borrows the descending melody figure from the Andante of Mozart’s Piano Concerto No. 21 that precedes the first entrance of the soloist. The exceptionally talented pianist and composer David Owen Norris elaborated the following sketch into something more substantial as a homage to Elgar that may be performed in diverse church settings. 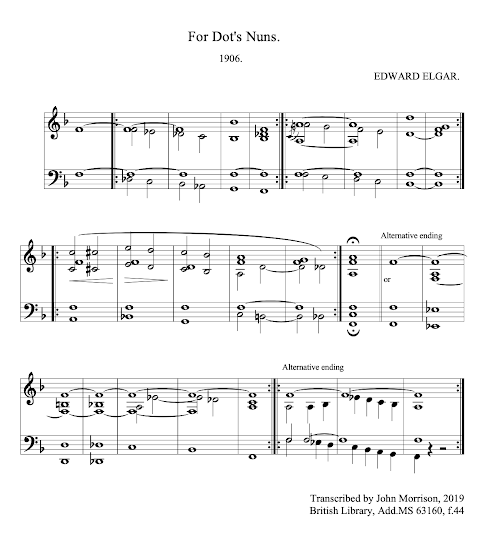 A cursory analysis of the Dorabella Cipher determined that four anomalous dots encode the Jesuit acronym “A. M. D. G.” The construction of this subcipher implicates two nicknames from Elgar’s immediate family. The first is “EDU” ensconced in line three exactly where a small dot appears above the sixth character. The raw transcription beginning at the dot yields “E D U”, a pet name for Elgar invented by his wife. The second familial nickname is “Dot” given to his youngest sister Ellen who realized her childhood dream of becoming a Sister at a nunnery. The overtly Catholic “AMDG” dedication outlined by the four anomalous dots in the Dorabella Cipher is easily connected to Sister Dot.
A Jesuit motto covertly embedded within a coded missive to an Anglican Rector’s young daughter reeks of incense and Elgar’s peculiar brand of japery. It is also consistent with Elgar’s practice of writing that dedication on some of his musical scores. Uncovering the stealth dedication was merely a matter of connecting the dots. It is truly astonishing that such a relatively simple subcode resisted decryption for over 124 years. More importantly, its discovery offers fresh insights into the Dorabella Cipher that may aid in unmasking the key to crack Elgar’s mysterious message. To learn more about the secrets of the Enigma Variations, read my free eBook Elgar’s Enigmas Exposed. 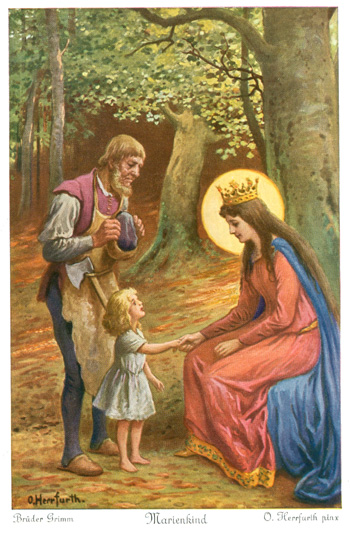 Posted by Robert Padgett at 6:41 AM