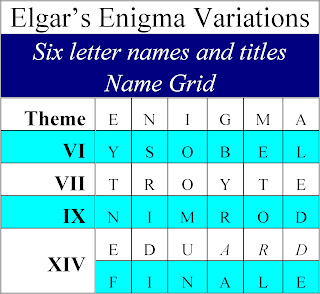 The Enigma I will not explain – its ‘dark saying’ must be left unguessed, and I warn you that the connexion between the Variations and the Theme is often of the slightest texture; further, through and over the whole set another and larger theme ‘goes’, but is not played…So the principal Theme never appears, even as in some later dramas–e.g., Maeterlinck’s ‘L’Intruse’ and ‘Les sept Princesses’–the chief character is never on the stage.

There are six names in the Enigma Variations with one remarkable thing in common – each has six letters (Table 1.1). Elgar’s initials for Variation XIV (E. D. U.) come from the German spelling of his first name (Eduard)which is one of those six-letter names. In Table 1.1, the missing letters needed to complete Eduard are italicized. Discounting these three missing letters produces a name grid with 33 letters, the numerological mirror image of Elgar’s initials (EE). Including the missing letters yields 36 letters, the same as the opus number for the Variations. The subtitle for Variation XIV is Finale, a title that, like Eduard, also possesses six letters. The remaining six-letter names found in the Variations are Enigma, Ysobel, Troyte, and Nimrod. 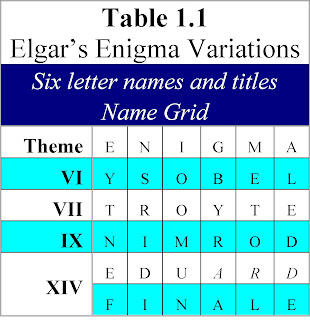 Could it be just a coincidence that Elgar supplied within the Variations six names that are each six letters long? Is it sheer happenstance that the opus number of the Variations is 36, the product of 6 multiplied by 6? That the word “saying” is six letters in length? Or that the sum of the Roman numerals for movements with six-letter titles (VI, VII, IX, and XIV) is also 36? One coincidence is possible. Two are unlikely. Three or more points to something calculated and deliberate. Elgar was trying to tell us something by using six-letter names in six different instances interspersed throughout the Enigma Variations. It is suspected that the reason for this is the close connection between the number six and the key to his enigmatic “dark saying” mentioned in the original 1899 program note: A 6-by-6 Polybius Box Cipher. As an aside, the association of the note letters E and F in the box cipher key is all but sealed by the pairing of the first letter from Elgar’s initials (E. D. U.) with the first letter from that movement’s subtitle, Finale. These same letters also happen to be the first two in the German acronym for the covert Principal Theme: Ein feste Burg.
Compiling a list in program order of the Variations’ six-letter names and titles forms the equivalent of a 6 by 6 checkerboard grid (Table 1.1). More intriguingly, a comparison of Elgar’s Box Cipher Table with the name grid turns up some remarkable parallels. For instance, four letters in the box cipher table are exact matches with those in the name grid: T, R, E, and I. These corresponding letters are highlighted in Table 1.2 with corresponding cells shown in Table 1.2a.

Theses matching letters are an anagram of the word rite, a term closely associated with Roman Catholicism. Rite is also a homonym of right, as in the right solution. In addition to four exact letter matches, there are six matching solution letters from the cipher table located in adjacent cells within the name grid: S, G, B, S, F, and O. These contiguous matching letters are highlighted in Table 1.3 with matching adjacent cipher cells shown in Table 1.3a.

Besides exact matches and adjacent matching cells, there are two matching letters in identical rows as shown Tables 1.4 and 1.4a: N and U.

The title Ein feste Burg may be assembled from 12 letters in the name grid (Table 1.6), leaving an astonishing array of anagram solutions for the remaining 24: nimayoeloytmrodedardinal. 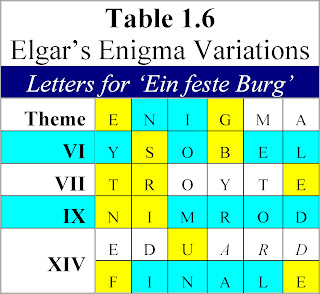 While the vast majority of these anagrams are utter nonsense, a rare few stand out. One example is “An ordained morality melody,” an apt description for Martin Luther’s epic hymn, A Mighty Fortress. Another possible anagram solution is “Iy, Edoo, adrn a Martin L melody.” The personal pronoun I is phonetically rendered as Iy. Edoo was Alice’s pet name for Elgar realized phonetically in the title of Variation XIV as E. D. U. The word adorn is spelled phonetically as “adrn.” This alternate anagram may be read as “I, Edoo, adorn a Martin L melody.” A series of variations is one convincing way to adorn a melody. The phonetic spelling of I as Iy may allude to Elgar’s personal identification with the military, specifically as an Imperial Yeoman. “Martin L” turns up as part of another anagram, this one obtained from Maeterlinck, the only name Elgar mentions in the original 1899 program note for the Variations. The name grid may be viewed as one complete anagram that reads “I, Edoo, adorn a Martin L melody.” The absent Theme is Luther's rousing hymn Ein feste Burg. The reader is encouraged to attempt other prospective anagram solutions and share them in the comments section.
The numbers 6 and 24 are intimately linked to Elgar’s Enigma Variations. For example, the complete six-word title in German for the covert Principal Theme is 24 letters long: Ein feste Burg ist unser Gott. A similar pattern exists with the Enigma Theme as there are 24 melody notes in the first six measures. These first six measures are cordoned off by an oddly placed double bar containing Elgar’s “dark saying” in the form of an ingenious 6-by-6 musical checkerboard cipher. In conclusion, a careful consideration of the parallels between Elgar’s box cipher table and the name grid provides powerful circumstantial evidence that he deliberately used six six-letter names in the Variations to hint at the nature and construction of his music cryptogram. To learn more about the secrets of the Enigma Variations, read my free eBook Elgar’s Enigmas Exposed.
Soli Yah Gloria
Posted by Robert Padgett at 4:55 AM

It is fascinating that the sum of the Roman numerals assigned to movements with six letter titles (VI, VII, IX and XIV) is 36 - the opus number for the Variations.