Elgar's character as a composer 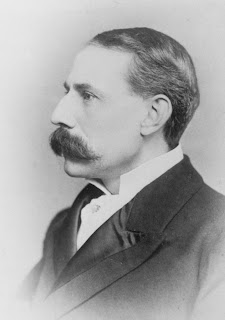 A man can no more diminish God's glory by refusing to worship Him than a lunatic can put out the sun by scribbling the word 'darkness' on the walls of his cell.

Two events from Elgar’s life reveal a tremendous amount about his character as a composer. The first occurred in 1869 when he was just twelve years old. He recalled this episode of contrapuntal mischief in these words:

I composed a little tune of which I was very proud. I thought the public should hear it, but my opportunities of publishing it were decidedly few. I took my opportunity when my father was engaged in preparing the Handel parts for the forthcoming festival. Very laboriously I introduced my little tune into the music. The thing was an astonishing success, and I heard that some people had never enjoyed Handel so much before! When my father learned of it, however, he was furious! [1]

It was the Three Choirs Festival, and the parts were for Handel’s sacred oratorio Messiah.
The next occurred in 1901 when Elgar was in his early 40’s and completed the overture Cockaigne.  His sketchbook (Figure 1) shows he conceived of the lover’s theme as a counterpoint to the Wedding March from Mendelssohn’s incidental music to A Midsummer Night’s Dream. [2] He invoked the counterpoint because Mendelssohn’s music is closely associated with marriage, and there were concerns by some that the lovemaking depicted in his music was not “strictly proper.”[3] This counterpoint is an example of Elgar’s practical jokes, or what he liked to call japes. 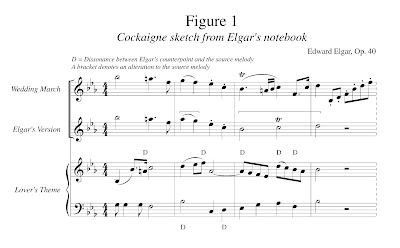 Although separated by a span of over 30 years, these two events from Elgar’s life share three commonalities:
Consistent with Elgar's character as a composer, all three of these elements are associated with my discovery of the unstated Principal Theme to Elgar’s Enigma Variations: Ein feste Burg (A Mighty Fortress).  Concerning the Enigma Theme, those who insist Elgar did not compose a counterpoint to a famous melody betray a profound ignorance of the composer's known history and character.  To learn more about the secrets of the Enigma Variations, read my eBook Elgar’s Enigmas Exposed. Like my heavenly Father’s gift of salvation, the price is free.

When we consider that Elgar's wife Alice, on hearing her husband's first exploration of the 'theme' on his piano then commented that he could "make something of that" it's noteworthy that Elgar was "exploring" - perhaps I should almost say groping his way to the broader piece that we now recognise as the Enigma Variations.
If, therefore, he was exploring his way, it seems a little odd that he already had a positive model/theme from which to work.
Even so, Elgar himself repeatedly acknowledged that there was an underlying counterpoint to the main theme without conceding exactly its origin.
For me, it is this dichotomy between the spontaneity of the work and it's link to 13 characters and himself on the one hand, then the set underlying counterpoint on the other, which puzzles me.
Even so, it is precisely because I am puzzled and because the work transports me - as does the whole spirit of Elgar's life and work - that I would want to read of your interpretation.
Forgive me, I am a writer and not a musician, but as a member of the Elgar Society and one who will again be visiting Malvern this summer, I cannot help but offer you my own lame wanderings...
Much admiration for your dedication to Elgar's music and what are to me your daunting credentials!
Raymond Nickford

Thank you for posting your comments about Elgar and the genesis of the 'Enigma' Variations. It is astonishing how often the fable is told how he suddenly improvised the ‘Enigma’ Variations in a moment of extemporaneous lucidity when what is known about his compositional style is the complete antithesis of that view. In Chapter 4 of The Cambridge Companion to Elgar, Christopher Kent discusses Elgar's compositional style and observes how he retained a lifelong habit of recycling and revising material, often over years and even decades. Extensive evidence of this practice is found in two of Elgar’s surviving sketchbooks. It is remarkable a third sketchbook covering the period from 1887 through 1901 is missing save for a few solitary fragments. Elgar composed the Variations in 1898-99, so that sketchbook documenting his methodical and patient planning of the Variations is unavailable. If it were, it would undoubtedly implicate the unstated Principal Theme and Elgar’s meticulous counterpoint to it. To assure that special mystery remained a secret, Elgar burned the sketchbook along with other papers during a two day period shortly after his wife’s death in 1920. The pace at which he composed and orchestrated the Variations (120 days) was far too brisk to be the result of a momentary epiphany. From what is known about his compositional style, the relatively fast completion of his first major orchestral work was surely the result of extensive and methodical planning. The story that it all occurred to him suddenly (one that he and his friends promoted) is undoubtedly another example of one of his ‘japes’ or practical jokes.