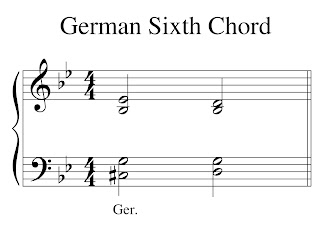 No great thing is created suddenly. 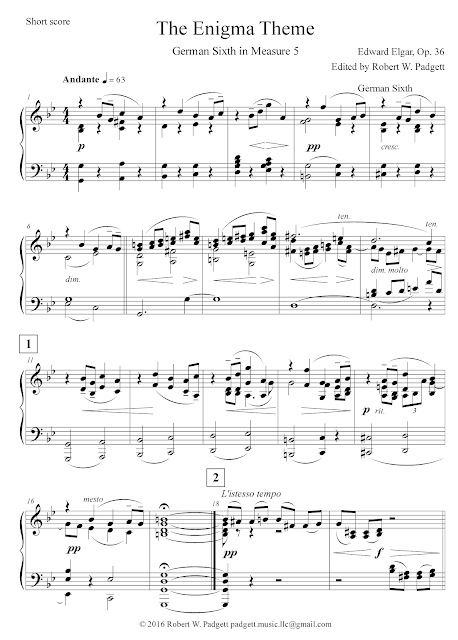 The German Sixth is enharmonically equivalent to the Dominant Seventh chord but is spelled differently because it is based on the fourth rather than fifth degree of the scale. As a result of its unique structure, the German Sixth resolves to the tonic rather than the dominant chord. At the beginning of measure five of the Enigma Theme, the German Sixth (formed by the notes C sharp, G, B flat, and E flat) resolves on the third beat to the tonic G minor chord in the second inversion. Considering the perpetual skepticism of the scholars, it should be emphasized that the term German Sixth was in common usage when Elgar composed the Enigma Variations in 1898-99. Numerous references to the German Sixth are easily located in textbooks and encyclopedias published before and during Elgar's lifetime. For instance, it appears in William Crotche's 1812 edition of Musical Composition published in London. It also appears in Palmer's Theory of Music published in 1876. Ebenezer Prout uses the same terminology in Harmony: It's Theory and Practice published in 1889. It also is mentioned in the April 1, 1879, issue of The Musical Times, and in Hugh Carlton's 1881 edition of The Genesis of Harmony published in London. It is also analyzed closely in the June 1, 1879, issue of The Monthly Musical Record, also published in London. To suggest Elgar may have been unfamiliar with this term in the study of harmony would be absurd.
And now to the crux of the matter. Elgar's use of the German Sixth in the opening measures of the Enigma Theme is significant because the title of the unstated Principal Theme consists of six words in German. The appearance of this chord in measure five of the Enigma Theme is doubly significant because Elgar embedded a unique Music Box Cipher within the first six measures of that movement, one designated by the odd placement of a double bar at the end of measure six. The cipher solution is an anagrammitization of the unstated Theme's 24-letter title, and the plaintext is comprised of phonetically spelled words and phrases in Latin, English, and what Elgar would have reasonably believed to be Aramaic. Even after cracking the cipher, however, the correct melodic solution evades discovery because the number of possible word combinations based on a 24-letter text string is astronomically high. This number rises exponentially when factoring in phonetic spellings and multiple languages. Therefore, the placement of the German Sixth within the musical cipher serves as a critical clue regarding the correct solution by surreptitiously identifying the source language and number of words for the unstated Theme's title. Incredibly, the first letters from the four languages found in Elgar's music box cipher is an acrostic anagram of his surname.
The placement of the German Sixth at the beginning of measure five bears numerological significance because the fifth letter in the alphabet is E, and the composer's initials are dual Es. The lowest note in the German sixth (C-sharp) is the raised fourth degree of the G minor scale, and is enharmonically the same as the lowered fifth (D-flat). The German sixth resolves to the tonic in the second inversion, meaning its lowest note is also based on the fifth of the scale (D). Therefore, a chord analysis of the root notes of these two chords (both forms of the fifth) suggests Elgar's initials from a numerological vantage point. This conclusion is bolstered by the appearance of this harmonic sequence in measure five of the opening movement with a title that also begins with the letter E (Enigma). Elgar essentially initialed the fifth measure of the Enigma Theme. It is remarkable that the Enigma Variations harbor at least five ciphers that encode Elgar's initials or last name. For example, the revealing decryption of the Psalm Cipher found in the Enigma Theme's first measure includes the composer's initials.
It is exquisitely appropriate Elgar directed his loyal friend August Jaeger to add the final piece to the puzzle by writing the word Enigma on the title page of the score. Jaeger was German, the word Enigma is six letters in length, and the first three letters of Enigma form an anagram of the first word in the title Ein feste Burg. The ostensibly English title Enigma is spelled identically in German, posing numerous cryptographic parallels with the German sixth and the six-word title of the unstated principal Theme. To learn more about the secrets of the Enigma Variations, read my eBook Elgar’s Enigmas Exposed.
Soli Yah Gloria
Posted by Robert Padgett at 5:23 PM

Hi, I hope you can check out my site. I wrote different instrument review and other musical information like understanding musical notes.

Here is one of the link about Whole Note Rest.
https://musicadvisor.com/what-to-know-about-the-whole-rest/

Either way, thanks so much for this blog of yours, keep it up!
Oh don't forget to visit and like my page on Facebook https://web.facebook.com/musicadvisorStephanie/