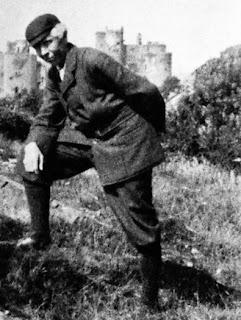 Variation III from Elgar's Enigma Variations is dedicated to Richard Baxter Townsend (1846 - 1923), the brother-in-law of W. M. Baker of Variation IV. Alice befriended the Baker family before she met Elgar, and after marriage Elgar became close friends with them. One outcome of that friendship is Elgar dedicated three of the Enigma Variations to members of the Baker family, namely III, IV and X.
It is entirely possible for Ein feste Burg to play through and over Variation III as demonstrated in Figure 12.1.  An audio file of this melodic mapping bolsters the efficacy of this contrapuntal solution. 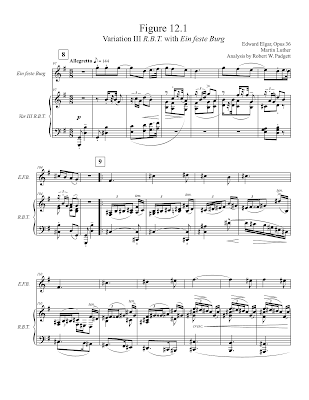 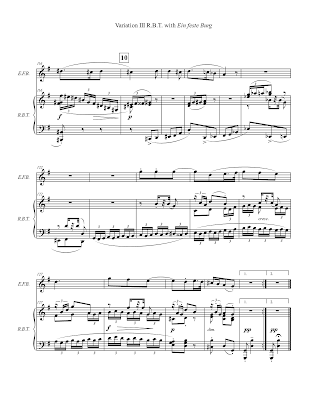 Figure 12.2 illustrates precisely how Ein feste Burg was carefully mapped over Variation III based on melodic interval mirroring and the principles of counterpoint. Melodic interval mirroring occurs when note intervals from Ein feste Burg are reflected in the variation over comparable or identical distances between notes. These notes do not necessarily appear in the melody line of the variation. The contrapuntal devices of similar and contrary motion were also considered in this analysis. Similar motion is when both voices move in the same direction, but not necessarily by the same degree. Contrary motion takes place when Ein feste Burg moves in the opposite direction than the variation, again not necessarily by the same interval. Similar motion is indicated by SM, and contrary motion by CM. For the purposes of this analysis, similar motion includes any instances of parallel motion, and contrary motion any instances of oblique motion. In some cases, the upper voice of the variation moves parallel with Ein feste Burg while the bass line moves in a contrary manner. An effective counterpoint typically employs a fairly balanced mix of contrary and similar motion, something clearly evident with this mapping. 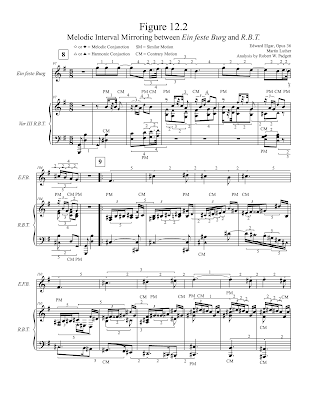 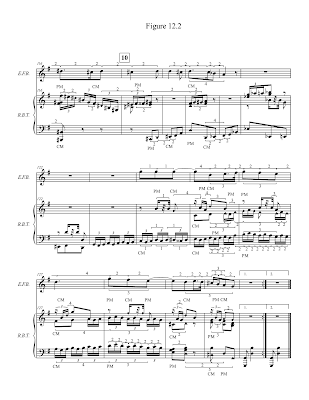 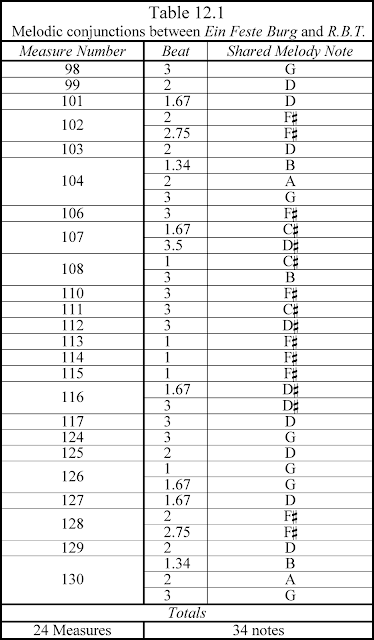 Table 12.2 breaks down melodic conjunctions between Ein feste Burg and Variation III by note type. There are 7 types of shared melody notes with frequencies range from 2 to 9.

Table 12.3 gives a complete breakdown of all shared notes between Ein feste Burg and a piano reduction of Variation III. There are 72 shared notes spread out over 27 measures.
Figure 12.2 indicates melodic conjunctions (34) with diamond-shaped note heads, and harmonic conjunctions (38) with triangle-shaped note heads. Ein feste Burg was deemed active in 29 measures, so slightly over 93% of active measures have shared notes. This percentage is 10% higher than for melodic conjunctions. According to note type and frequency there are 8 types of shared notes with frequencies ranging from 2 to 17. Among these shared notes, 7 are shared by both melodies (i.e., A, B, C sharp, D, D sharp, F sharp, and G). 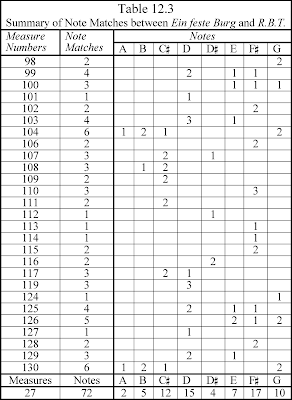 Conclusion
The preponderance of the evidence outlined in the above Figures and Tables demonstrates Variation III is a clear and convincing counterpoint to Ein feste Burg. To learn more about the secrets of the Enigma Variations, read my free eBook Elgar’s Enigmas Exposed.

Posted by Robert Padgett at 8:10 PM