Then Jesus told him, “Because you have seen me, you have believed; blessed are those who have not seen and yet have believed."
John 20:29

Variation II of Elgar’s Enigma Variations is dedicated to Hew David Stewart Powell (1851 – 1924), a gifted amateur pianist who met Alice before her marriage to Elgar. Although he resided in London, Powell regularly took part in the musical life of Malvern throughout the 1890s, often in a trio with Elgar and Basil Nevison (the friend pictured within Variation VII).[1] Elgar wrote this variation “is a tribute to a very dear friend whose scientific and artistic attainments, and the wholehearted way they were put at the disposal of his friends, particularly endeared him to the writer.”[2] In My Friends Pictured Within, Elgar added:

Hew David Stewart-Powell was a well-known amateur pianist and a great player of chamber music. He was associated with B.G.N. (Cello) and the Composer (Violin) for many years in this playing. His characteristic diatonic run over the keys before beginning to play is here humorously travestied in the semiquaver passages; these should suggest a Toccata, but chromatic beyond H.D.S.-P.'s liking.

Powell’s routine of warming up on the piano with quick, toccata-like passages is captured by the running sixteenth notes. Figure 11.1 shows how Ein feste Burg plays 'through and over' Variation II. An audio file of this melodic mapping supports the efficacy of this contrapuntal solution. 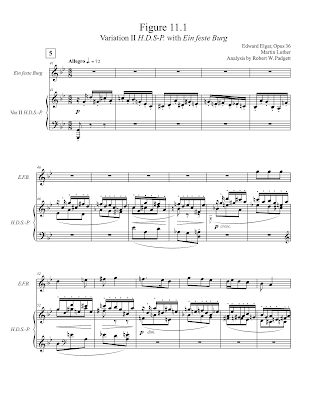 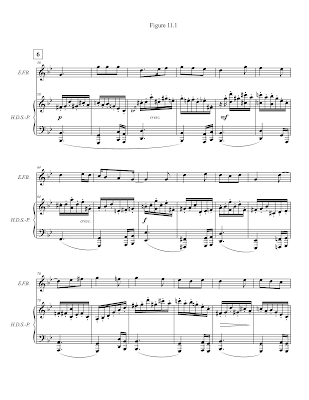 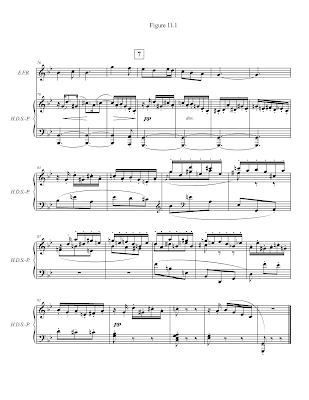 Figure 11.2 illustrates precisely how Ein feste Burg was carefully mapped over Variation II based on melodic interval mirroring and the principles of counterpoint. Melodic interval mirroring occurs when note intervals from Ein feste Burg are reflected in the variation over comparable or identical distances between notes. These notes do not necessarily appear in the melody line of the variation. The contrapuntal devices of similar and contrary motion were also considered in this analysis. Similar motion is when both voices move in the same direction, but not necessarily by the same degree. Contrary motion takes place when Ein feste Burg moves in the opposite direction than the variation, again not necessarily by the same interval. Similar motion is indicated by SM, and contrary motion by CM. For the purposes of this analysis, similar motion includes any instances of parallel motion, and contrary motion any instances of oblique motion. In some cases, the upper voice of the variation moves parallel with Ein feste Burg while the bass line moves in a contrary manner. An effective counterpoint typically employs a fairly balanced mix of contrary and similar motion, something clearly evident with this mapping. 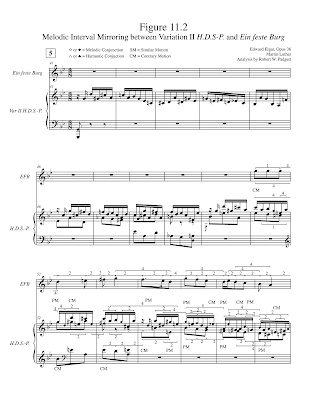 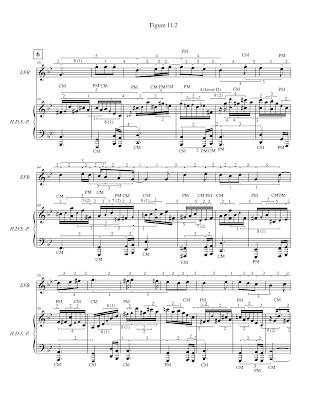 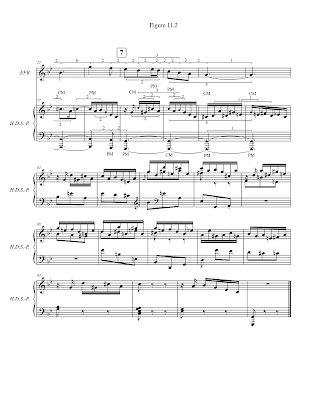 Table 11.2 breaks down melodic conjunctions between Ein feste Burg and Variation III by note type. There are 9 types of shared melody notes with E flat/D sharp treated as a single category with frequencies ranging from 1 to 11. It is remarkable all 9 note types are shared by both melodies.

Table 11.3 summarizes all note matches according to note type and frequency with a total of 9 shared note types with frequencies ranging from 1 to 21.  D sharp/E flat are consigned to a single category because of enharmonic equivalence. It is worth mentioning all 9 note types are shared by both melodies. There are 65 shared notes between Ein feste Burg and Variation II in measures 51 through 82. In Figure 11.2 melodic conjunctions (45) are represented by diamond-shaped note heads, and harmonic conjunctions (20) by triangle-shaped note heads. It was determined the covert Principal Theme is dormant in the first ten measures (41-50), and the last 14 measures (83-96). There are at least 65 notes from the piano reduction of Variation II matching 46 out of 76 melody notes from Ein feste Burg. This means an astounding 60.5% of the melody notes from Ein feste Burg are embedded sequentially within the melody and score of Variation II. This outcome is far beyond the reach of random chance or the whimsical application of 'free rhythm' to contrive a fit. 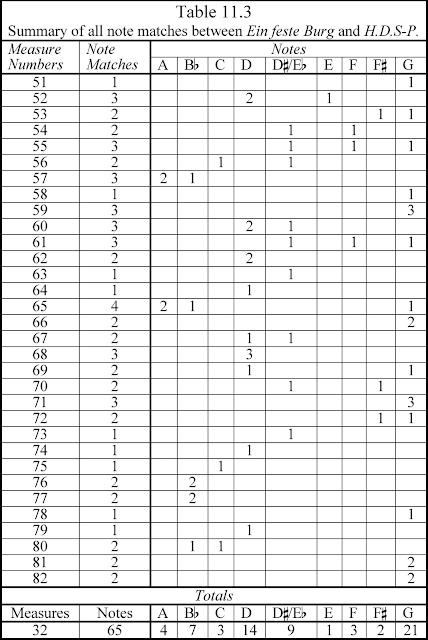 Conclusion
The preponderance of the evidence outlined in the above Figures and Tables demonstrates Variation II is a clear and convincing counterpoint to Ein feste Burg.

The Mysterious-Hyphen
The initials for Variation II (H.D.S-P) contain an oddly placed hyphen between the letters S and the P. Patrick Turner confirmed Powell’s college records have no hyphen between those letters.[3] Why would Elgar place a hyphen where one obviously did not belong? As my investigation has shown, the insertion of double bars and quotation marks serve as the harbinger of a cryptogram. Is the hyphen another deliberate puzzle, and a clue?
There is a subtle yet credible connection between the letters S and P that dovetails elegantly with the discovery Elgar was inspired by the Shroud of Turin when he composed the Enigma Variations. The letters S and P are hyphenated to show they belong together as part of another person's name: Secondo Pia. The first name Secondo is all but spelled out by the Roman numeral assigned to this variation because II stands for second, and Secondo means just that in Italian. The toccata-like runs mimic Powell's warm-up routine on the piano, and the name Pia is found in the word piano. This is one of many extraordinary examples of Elgar's sense of wordplay.
Pia was the amateur photographer who took the first photograph of the Turin Shroud on May 28, 1898. The famous negative of this photograph was widely reported in the Catholic and international press in 1898, and it was distributed widely as an icon among the faithful. That date (May 28, 1898) was five months before Elgar began composing the Enigma Variations, so the timing is credible. Is it possible Elgar was so moved by the face of Christ hidden in plain sight on the holy Shroud that he conceived a symphonic work to honor that discovery? The Enigma Theme is essentially a contrapuntal 'negative' of a famous melody, much like the Turin Shroud is a photographic negative of a crucified man many believe to be Jesus. It took the passage of millennia before technology and modern photography could unlock the secrets of the Shroud. In contrast, it took a mere 110 years to discover the covert Principal Theme of the Enigma Variations.

There are numerous allusions to Dante's Divine Comedy throughout the Enigma Variations. Elgar's cryptic reference to Secondo Pia's name may be linked to Dante's greatest poetic work. In Purgatorio 5:134-136, Pia dei Tolomei tells Dante about her tragic life, a drama portrayed in various artistic works such as a play by Carlo Marenco, an opera by Donizetti, and a painting by Rossetti. The Roman numerals for Elgar's second variation are two I’s. The hyphenation of the letters S and P combined with these Roman numerals alludes to Pia’s historic experience of seeing the photographic negative of the Shroud of Turn with his own two eyes.  The epigraph comes from the account of Thomas, the doubting disciple who insisted he would not believe Jesus rose from the dead unless he witnessed the holes in his hands, feet, and side. When Jesus finally presented himself to Thomas, Thomas believed and professed, “My Lord and my God!”[4] Elgar believed before seeing the amazing photographic negative of the Shroud of Turin, and for that, he is truly blessed. To learn more about the secrets of the Enigma Variations, read my free eBook Elgar’s Enigmas Exposed.